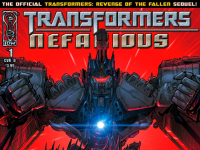 Movie-verse lovers sit down. Your long awaited sequel to the summer megablockbuster hit TRANSFORMERS REVENGE OF THE FALLEN is here!

Well at least in IDW Publishings comic book mini-series form it is. And no this is not TRANSFORMERS 3...this is TRANSFORMERS NEFARIOUS, and after reading issue #1, it looks as though movie-verse fans will enjoy this series a whole bunch!

So here's the official tease by IDW for NEFARIOUS:

"The sequel to TRANSFORMERS: REVENGE OF THE FALLEN starts here!

What is The Initiative? More to the point, why doesn’t the all-seeing SOUNDWAVE know anything about it? How did they come to reanimate/control RAVAGE? SOUNDWAVE must find the answers, and he’ll destroy anything in his path to get them!"

I can say with certainty that there is no lack of action in this first issue of the series.

Soundwave, after only playing a miniscule part in ROTF, becomes the lead baddie, discovering that his intelligence gathering does not make him quite as powerful as he thinks he is. At the beginning of this issue, Soundwave's goal is nothing less than to take over the Earth, but the sudden reappearance of RAVAGE (SPOILER- Ravage was 'deactivated' in ROTF) quickly draws his attention to parts and persons miraculously as yet unknown to him.

This ultimately leads Soundwave into conflict with N.E.S.T Autobots, and the Initiative, a new group of humans jostling for power and technology. It seems the Initiative is on a mission to collect some spark energies up, and Soundwave and his minions encounter both groups at the site where the remains of Ravage and the kamikazi kitchen bots happen to lie, somehow, miraculously together.

The Initiative uses some new tech (that even impresses Soundwave) to remove the remaining spark energies from the corpses, and battle with Soundwave and his attacking army. Soundwave's involvement, and thus that of his troops seems unclear, but it seems he is hoping to learn more about this new group that is 'Not N.E.S.T' as the monotone intelligence agent puts it. When the Autobots finally show up, both initially conflicting groups make hasty retreats, and turn tail (some members literally). The Initiative seems to have gotten what they wanted, and Soundwave's group, because he is more concerned about his intelligence gathering than defeating Autobots, and believes firmly that he can locate anyone, anywhere, and any time he desires.

Bumblebee, totally confounded by both groups' actions, quotes some somewhat famous song lyrics to let us know just how confused N.E.S.T and the Autobots are with the actions of both of the other groups. It's a good start to the series, and it immediately uses the cast of Autobots from ROTF, but like the transitional movie related series before it, 'Reign of Starscream', it uses a number of 'just out of camera shot' members of the Autobots including Breakaway, Knock Out, and Armorhide.

We already get a fatality in the first issue, we get to see more Sideswipe, more pretender action, and some very well movie redesigned Soundwave companions (However, Rumble is absolutely confusing...).

All in all the art is really nicely done (Carlos Magno--'Transformers Tales of the Fallen'), with some really excellent splash pages (Sideswipe!), and clear representations of established, and 'off camera' characters with toy versions, as well as, some brand new characters from G1 with movie designs. The artist renders humans and Transformers with a lot of very accurate detail.

The story (Simon Furman) plays pretty straight forward, but does open us up to some new surprises. It was really nice not to have to wait for the buildup that we have had to in other IDW series. But how hard can it be to continue where the movie left us? There was a lot more that we wanted to see, and have revealed.

The mysterious new group of humans also creates some added mystery much like Sector Seven did in the original Live Action Movie, and how 'The Machination' have in the IDW Generation one continuum. Seems like an ongoing theme here.

While not a big movie universe fan, I did enjoy this story as favorites like Soundwave and Sideswipe get more and more face time, and it's always nice to see the toys we buy, making it somewhere into the story. Popular Transformers writer Simon Furman also returns to the universe he really helped to create, and the art again, makes it quite enjoyable.

I recommend you check out the NEFARIOUS #1 Preview here, and be sure to head to your local establishment to pick yourself up a nice Transformers read this week.

Blurrz wrote:Well.. they might not be greatly plot driven, but Movie comics sure have alot of action!

zenosaurus_x wrote:While this all looks cool...I really hate RUmble and Beastbox's designs.....Ravage's was more alien...but they're too earth-animal looking, plus Rumble as a Rhino, as awesome as Rhinos are...is just...strange...then again it makes more sense than looking like Frenzy(from the first movie of course).

Too bad Overkill wasn't there, would've preferred him over BeastBox.

It's not like there hasn't been a precedent for earth animal forms. There was a giant scorpion in both movies.