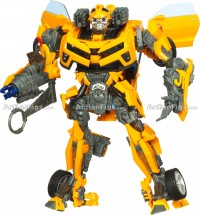 Is the presumed Leader Class Bumblebee simply this new incarnation? Take a look at Battle Ops Bumbleebee, which looks to be a stand alone toy in it's own class size. Thanks to ActionFigs.com, we get stock photos of the figure. Check them out below.

The entry at ActionFigs.com can be found here.

nothing really against it but do we really need another bloody bumblebee toy?
im sick of the two that i have already!!! honestly i think this is one we could easily live without.

... ok so maybe i do have somthing against it.
Re: ROTF Battle Ops Bumblebee Revealed (1038739)
Posted by Razorclaw0000 on January 20th, 2010 @ 5:04pm CST
That is some strange new packaging. Also, I see 6 conversion levels now? We're going to get finer grained levels, and they still won't be accurate.

Also, what is that odd pull ring on the right arm?

I really do like the big hood guns, so long as they collapse into the hood.
Re: ROTF Battle Ops Bumblebee Revealed (1038740)
Posted by Overcracker on January 20th, 2010 @ 5:06pm CST
Really? A new BB mold? Was this really necessary?
He looks o.k but do we need another Camaro?

I mean we already have 3 Deluxes, 1 Human Alliance, 1 Ultimate in just ROTF alone. Not to mention the legends and bumpers and all other BB paraphernalia this movie has churned out.

ok so maybe i do have somthing against it.

bumblebeee... ok i think we all od have something against it not because itanosther how bbs we have now but how it looks this looks horrible ill have to see video review of this guy first but either way i think this will be the first leader class figure ill pass on is the ring hin another way of pull my finger i dont get it you pull ring his mask comes down or soemthing or does fire his gun ha bb looked more realistic & better than this one.

if the ring comes off, & guns collapseable hen maybe ill buy him and if his armcannon swithes to gun to his hand that will be an extra added feature but i have greatly disspointments with this thign just buy looking at it i know the saying dont judge book buy its cover but this i may make an exeption until proven oher wise with video review
Re: ROTF Battle Ops Bumblebee Revealed (1038746)
Posted by Noideaforaname on January 20th, 2010 @ 5:18pm CST

Razorclaw0000 wrote:Also, what is that odd pull ring on the right arm?

Bad points: Too many Bumblebees already (let's see more Barracade or Blackout!), The eyes still remind me of a frightened animal, the cannon-arm looks like it's all there, meaning no right hand, he's got a giant hoolahoop stuck on his arm that looks like it takes up alot of space, It has lights and undoubtedly sound, meaning more stupid sound bites that weren't from the movie and are most likely really dumb songs.

I'll pass on this.
Re: ROTF Battle Ops Bumblebee Revealed (1038753)
Posted by Rated X on January 20th, 2010 @ 5:32pm CST
Not interested in this one. Why cant they stop making Bumblebee with only 1 arm ???
Re: ROTF Battle Ops Bumblebee Revealed (1038754)
Posted by Mykltron on January 20th, 2010 @ 5:38pm CST
I don't think this is Leader class - I think it's Human Alliance size. For a start it just LOOKS smaller than leader. Also, when you compare it to HABB:
- chest is the same
- doors are the same
- wheels with chain and gear detail are the same
- left hand sculpt is the same
- abdomen (with all the pistons that BB DOESN'T HAVE) and groin are the same

But wasn't there a price thing about Battle Ops Bee being $60?


BTW the pull ring is to activate lights and sound. It says so on the box.

edit: Place your bets. How many times will it be repainted?
Re: ROTF Battle Ops Bumblebee Revealed (1038763)
Posted by Swiftknife24 on January 20th, 2010 @ 6:16pm CST
I knew it was a more-or-less kit-bashed retool! (It's also common to us Star Wars Hasbro customers

It's a Human Alliance figure without the Human elements; why can't they just say?

Although, you've got to wonder; if it's a new 'Human Alliance But Not' line, then maybe they'll release other characters that would otherwise be difficult to pair up with any humans? (Sideways, Jolt, Jazz, etc)

heltskelt wrote:Really? Was Bumblebee such an impact on the kid demographic that it calls for countless toy incarnations? Damn, Hasbro, just give us a leader-size Blackout already and quit stalling!

I think that we have to keep in mind the notion that this is not just a regular line of Transformer figures but an official movie line, so it needs to accentuate certain characters more than others. In a typical line of TFs I think we get more Optimus than any one else, but with the movies we get a load of BBs because the children are supposed to identify with the sppechless, characterless character who uses songs to communicate with its target audience who is probably ten years too young to know what the songs are.
So basically, BB=BS.
Re: ROTF Battle Ops Bumblebee Revealed (1038770)
Posted by Counterpunch on January 20th, 2010 @ 6:38pm CST
Haha to all the people who doubted this from before.

... What would that entail? Nothing?

Also, they're really flogging a dead horse at this point with Bumblebee - they're past that point even.

edit: Place your bets. How many times will it be repainted?

And then, in the thrid quater of 2010, Hasbro will really start to crank out the repaints!
Click here to view additional comments about this topic at the Energon Pub Forums ...