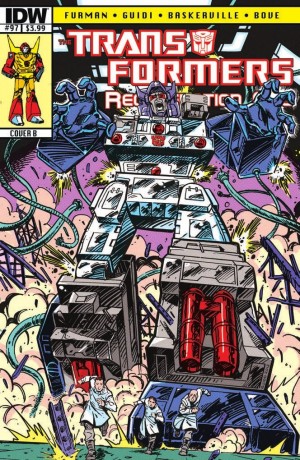 Wordsmith Simon Furman has updated his blog with the usual Script (W)Rap for this week's issue of ReGeneration One! Do you have what it takes to be teased a little further until tomorrow's release of the title? See what he has to say below, and check out his blog here.

Can it be? Is that the final countdown I hear, as Regeneration One ticks towards its 100th — and final — anniversary issue? Oh yes, issue #97 (and part 2 of the final story arc of the series that kick-started everything TRANSFORMERS is today) hits the stands this week (Wednesday December 18th). The War to End All Wars continues, as the mysterious (and long-absent) Senator Jhiaxus makes his presence felt. And how! If you’d prefer to have no more tantalising teasers (and the odd spoiler) thrown your way, then cease and desist now. If you’d like your appetite whetted even further, read on. Okay, so we all know Rodimus Prime has a bunch of stuff he needs to fix (as revealed in our revelatory issue #0), and chief among them is a certain Cybertronian senator who not only deleted himself from Cybertronian history & everyone’s memory but also stole vital secrets (of life and death no less) from the Underbase mainframe. Phew, and now he’s back. But does he come as friend or foe? How does Rodimus Prime deal with a force committed to the grounding Cybertronian principle of Universal Order? Is there other stuff going on too? Of course… and, as usual, Grimlock and the Dinobots are in the thick of things. Since they rose from the underground depths of Cybertron, no one’s quite known what to do with the planet’s primordial ancestors. Well, the new Cybertronians of Jhiaxus’s second generation empire do. And the only thing standing between them and a total purge of these ancestors are the Dinobots! Oh yes, and there’ s the return of a certain… well, why spoil everything? Go see for yourself. You’ll be happy you did. Full preview for the issue can had here.

I'll believe it when I see it. So far it's been more miss than hit.

Well, I think it did. I'd be curious to see what you think too, once the review is posted tomorrow!

I'll believe it when I see it. So far it's been more miss than hit.

Well, I think it did. I'd be curious to see what you think too, once the review is posted tomorrow!

Can't wait. Unfortunately I won't be able to pick up my copies until Friday.

DARK FORCES RISE! JHIAXUS—the mysterious senator who deleted himself from Cybertronian history—is back… but as friend or foe? RODIMUS PRIME is forced to question the motives of Primus himself—does he drag the AUTOBOTS into a war they can’t win… or side with an “enemy” who seeks only one thing: universal order?

Because what could go wrong..?

And here he is. Been teased for some time now, we've been developing a back story, dealing with the aftermath of the battle with Galvatron (while Optimus keeps building things in Oklahoma, as you do) and the primordial Cybertronians settling in - and there's quite a message going on with that plot, too - and now, Simon Furman brings Jhiaxus slap bang in the middle of it.

Rodimus Prime deals with Jhiaxus, who goes in full-on explanation mode - yet, still works, quite nicely, too. He's been set up to be an arrogant, learned, self-centred ex-senator, and that's exactly what his character is like. And there seems to be a reason behind all his power, too.

He's backed up by Hasbro!

I'm impressed. Furman plays well with his fairly expanded cast, while never losing sight of the threat posed by Jhiaxus. The Dinobots are brought in for a "subplot" of sorts, that ties in with the rest, we get to look at the continuation of the Fort Max plot, even if just for a glimpse, and the conclusion is very very fan-worthy

Guido Guidi is still on art duties, with Stephen Baskerville inking the gorgeous linework. I still sometimes forget that this is not Wildman at his best, as Guidi has done an amazing job at emulating the style while still keeping his own touch in the art. The more organic characters look brilliant, and Jhiaxus' face is something to be in awe.

As for colours, JP Bove once again delivers some stunningly chromed and slick paintjobs to absolutely everything, from organic technobirds to possessed giant robots to gold-shining faces and rubble, guns, skies and more. I'm still not sure how he does what he does, but does it he does, and does it well.

Chris Mowry's letters do a great job of helping out with the more action-based sequences, too, without ever getting in the way of the artwork - which is always a good thing. And make sure you take a look at all the covers: other than Andrew Wildman's classic A cover, Guidi's Fortress Maximus is a thing to behold, and Geoff Senior's cover is a fun as always!

Ok, this was really fun. Furman's dialogue can get a little our of hand, especially reading this and Dark Cybertron together, but it still fits the characters. The action in this one is well-plotted and justified, and the storyline looks very promising. And I really hope other readers get the kick I got at the two revelatory point in the issue

Next: Another good plan

I'm running out of things to say about the artwork, though it never ceases to amaze me. This is what most older readers will remember from the earlier days, with the new injected into it. It's shiny, it's gritty, it's beautiful, it's face-y and it's all due to the more or less Italians (and Baskerville). Yes, I just went there.