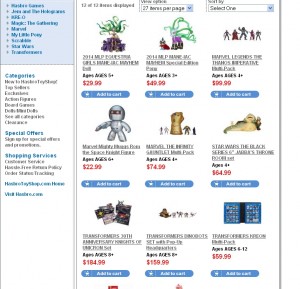 Missed out on those g1 inspired Dinobots or the Kreons? Hasbro Toy Shop has restocked them. You can find them here

Get them before they're gone! again!

What are they going to do, make another run of them?
Re: SDCC Exclusives restock (1599307)
Posted by Relic Dinobot on August 14th, 2014 @ 1:08pm CDT
What defies comprehension for me is that the Kreon set sells for 60$ plus whatever shipping fees on HTS, but is seen at two, even three times that price on the secondary market. I know it's all because of the demand for the awesome little buggers, but still. Pretty much what does it in for me not getting the set (since it sells out so quickly on the HTS site.)
Re: SDCC Exclusives restock (1599328)
Posted by Wolfman Jake on August 14th, 2014 @ 2:53pm CDT
Awesome news! I just placed my preorder for the G1 Dinobots set. This made my day.

1) try and beat everyone to the booth on Wednesday's preview night, by lining up early, only to find out that exhibitors allowed in an hour earlier and have practically bled the booth dry already
2) come back every morning until you get a ticket to get in the booth, which they give out at 6am (sometimes people even camp out). And there's only a certain amount handed out each day, so you could line up and end up not getting one.
3) the "bouncer" guarding the front of the booth's line, randomly, and I mean RANDOMLY, hands out a hand full of tickets. Where you plead or beg along with a small crowd, each doing the same, but he will never give in and then are told to clear the area and not to loiter around until the random tickets are handed out. So now you and many others are scrambled around surrounding booths like black ops, waiting to pounce, only to be kicked out or just didn't get there in time because he only gives a hand full of tickets. All this is the middle of the sea of madness that is SDCC.

I'd be pissed if I saw that not only once, but now twice these "show" exclusives are available to everyone online. Don't get me wrong I think everyone should be allowed to buy whatever they want, but then at least stop calling them exclusives for the show. Just copy what Toys r us does every year with their exclusives, where those that attend the show get first dibs, but they will be sold for mass market afterwards.

I went to SDCC for the last 4 years and to get into Hasbro's line to buy exclusives is the most demeaning, frustrating, and almost embarrassing thing I've ever had to do. Degrading grown men and parents, buying for their children, making them jump through hoops, just get "exclusives" only to find out later they're not really exclusive.

I've got my exclusives almost every year and its brutal trying to get them, so I didn't even wanna bother trying this year. I walked past the line a couple times and asked if they're giving away the 'random tickets' and got denied. That was for Wednesday, Thursday, and Friday. I came back on Saturday and the "bouncer" that guards the booth was gone. Instead there was just a worker sitting on a stool, off to the side of the ropes, so I asked if I could enter the line, thinking of course I can't *rolling eyes*. He replied with "yep" and I walked in with ease to buy my Dinobots. All I could think about was, what if I wasted the time/energy to get those damn tickets. SMH

This is not hate to any of my fellow TF collectors who didn't get a chance to attend the show, it's just to show you what you have to go through if you did.
Re: SDCC Exclusives restock (1599369)
Posted by Wolfman Jake on August 14th, 2014 @ 4:43pm CDT
I can understand the frustration. The whole "exclusives" concept at these expos REALLY needs an overhaul, but it won't happen without a really big push from consumers, because these stunts do nothing but line these companies pockets with our cash. They won't give a damn as long as the product keeps selling out every year. Seriously, why would Hasbro or any other exhibitor want to change anything about the way they do business at SDCC or any other show? It's just too profitable of a scheme to tamper with.
Re: SDCC Exclusives restock (1599471)
Posted by JRFitzpatrick7 on August 14th, 2014 @ 10:20pm CDT
Ordered from them on august 5th. Got a deluxe strafe and a knights of Unicron set. Still hasn't shipped. WTAF?! Shame on me for ordering the dinobots from them today as well
Re: SDCC Exclusives restock (1599476)
Posted by mooncake623 on August 14th, 2014 @ 10:52pm CDT

JRFitzpatrick7 wrote:Ordered from them on august 5th. Got a deluxe strafe and a knights of Unicron set. Still hasn't shipped. WTAF?! Shame on me for ordering the dinobots from them today as well

Wolfman Jake wrote:I can understand the frustration. The whole "exclusives" concept at these expos REALLY needs an overhaul, but it won't happen without a really big push from consumers, because these stunts do nothing but line these companies pockets with our cash. They won't give a damn as long as the product keeps selling out every year. Seriously, why would Hasbro or any other exhibitor want to change anything about the way they do business at SDCC or any other show? It's just too profitable of a scheme to tamper with.

O yea for sure. They laugh all the way to the bank. And poor suckers like myself will always buy because well......Transformers are just awesome.
Re: SDCC Exclusives restock (1599496)
Posted by megatronus on August 15th, 2014 @ 2:33am CDT
I really wanted the Jabba & Thanos Imperative sets. Out of stock. Sigh.

Also, I tracked down a decently priced Dinobots set last week... and now it's at HTS. For cheaper. Double Sigh.

Well, I went ahead and ordered a second set of Dinobots from HTS anyway. I can cancel it before the ship date, need be.
Re: SDCC Exclusives restock (1599510)
Posted by Rated X on August 15th, 2014 @ 6:23am CDT
A lesson should be learned here:

Dont go to a convention for the sole purpose of buying "exclusives". Go to a convention because you enjoy going to conventions. Even if you buy the exclusives online at the craziest crackhead scalper prices, you will still save over a grand on plane tickets, hotel fees, transportation, and food. I saved a lot of money by not going to Botcon this year and I still got all the exclusives (except for the clones cause I got the mech ideas versions) I used some of that money I saved to treat myself to the dinobots set and a G1 slog over at amazon. Im all for mass production of these "exclusive" figures because it encourages scalpers to keep their day jobs flipping burgers.
Click here to view additional comments about this topic at the Energon Pub Forums ...