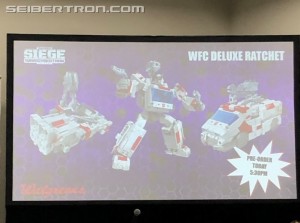 Seibertron is at the Hasbro product panel right now for san Diego Comic-Con 2019. Refresh often to get more information!

-Transformers Hall of Fame
Induct new individuals to Hall of Fame
Flint Dille
Autobot plaque given to him. Silver Autobot insignia
He misquoted Megatron “wait, I live”
Flint Dille will be at Transformers party tonight with Vince DiCola and DON MURPHY

-Toy of the year and favorite character vote coming later
-Cyberverse Power of the Spark, showing a clip of the upcoming season of Cyberverse

-SDCC exclusives. Ghostbuster mp10 and the botbots
showing off the proton pack box
35th anniversary of Ghostbusters and Transformers
The botbot con crew is supposed to be a convention survival guide
Some botbots are actually in cosplay with softgoods

Astrotrain has base mode
John warden collects]gauge trains
All figures up for preorder today at 5:30
Reflector 3 pack
John warden says he got the three pack as a kid
Includes kremzeek
Kremzeek is essentially a battle effect

Ratchet can “repair” a micromaster 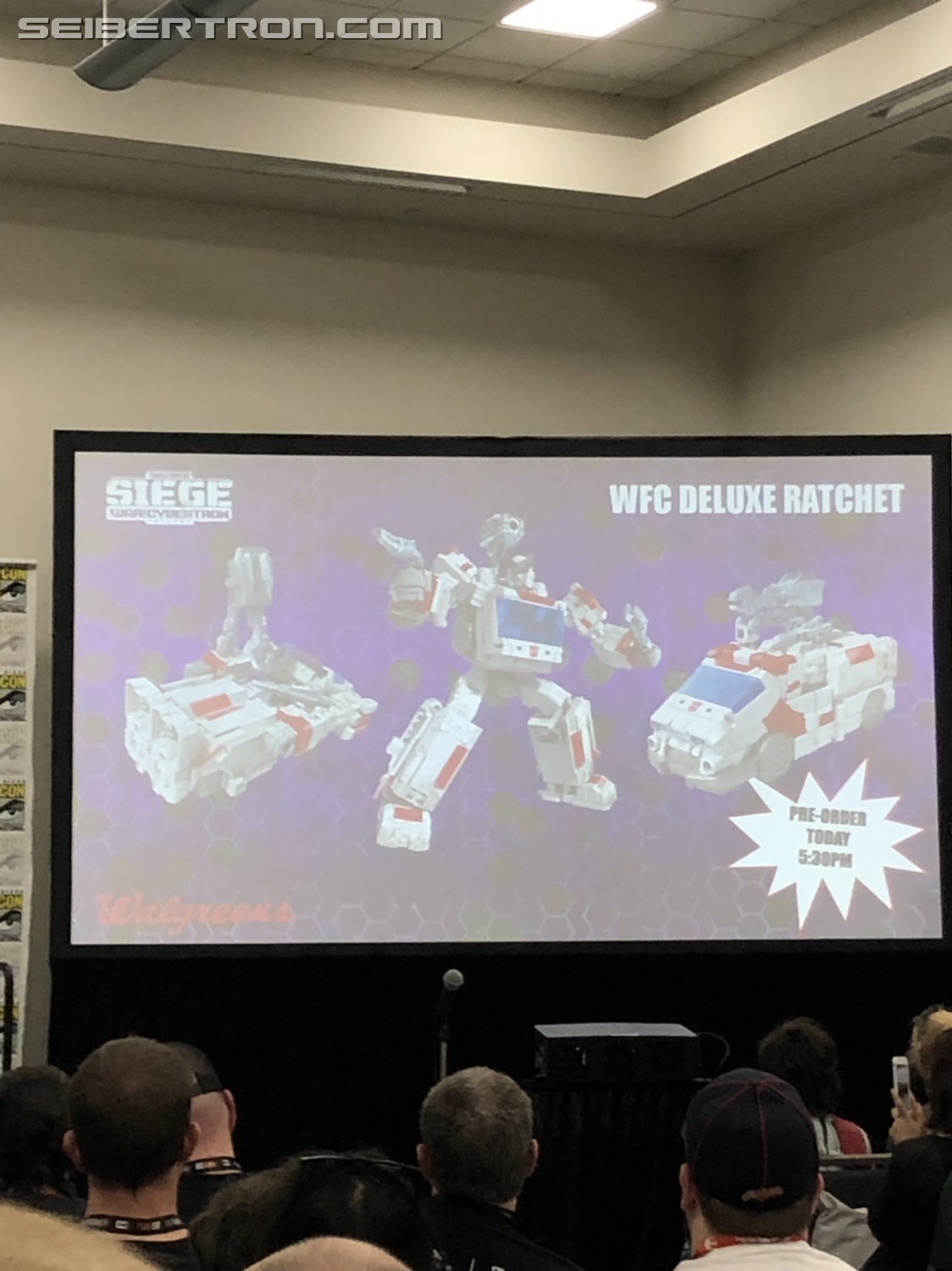 -Generations selects
Lancer
Entertainment Earth
Galactic Man Shockwave
Available at Entertainment Earth
Unicron
Fan vote
Polling crowd
Runamuck won and is in development now
New story. He was a stowaway on the ark!
Part of the next chapter of WFC

-Unicron
Free poster giveaway for Unicron toy at 3:30
Unicron video
People shocked at the $579.99 price
Flint Dille wants the head to come off
So it can float around
Flint Dille talking about the origin of Unicron
Behind the scenes of Unicron creation
Giant drawing of Unicron design schematics
Drawing is 1 to 1 with the toy
Design starts with sketch
Unicron was too big to sketch on table
Had to increase sketch by 3
Showing cardboard sphere mock-up
With panels drawn on as lines
Biggest challenge is the sphere of the alt mode
Showing cad files and styrofoam sphere
Gray model of toy
Simplified parts for prototype
12 teeth with gears for the maw

And that's the end. Next stop, the Entertainment Earth panel! Thanks for tuning in, and be sure to check out the video recording of the panel, as well as more SDCC news coming your way!

I think they're referring g to his G1 toy head, which was fairly reminiscent of a sphinx's head.

DMSL wrote:Unicron is too expensive. They need to bring this to regular etailers and reduce the price to $ 300,-

Re: #SDCC2019 Hasbro Toy Panel! New Amazon 3 pack with a Powerdasher, Runamuck wins, and more! (2030294)
Posted by Prime Target on July 19th, 2019 @ 12:17am CDT
Ratchet looks cool, Snapdragon was hinted and Flint Dille agrees with me that for that price Unicron's head should come off. That's all the positive I have here.

The only reason why Runamuck won over Needlenose is because Runabouts an easy repaint. Needlenose is less obscure then he is due to being in IDW's Robots in Disguise and if anything was neck and neck in the Facebook poll. Believe me I read those comments. This is severly disappointing.

The Toy Reflector should have had new headsculpts plain and simple. The extra parts and new decos just do not go far enough to capture the whole effect without the new heads. Added to the fact they weren't given their Original names, Spectro, Spyglass and Viewfinder, Just defeats the purpose even more. I get what your trying to do and I appreciate the attempt at least but it just isn't good enough.
Re: #SDCC2019 Hasbro Toy Panel! New Amazon 3 pack with a Powerdasher, Runamuck wins, and more! (2030339)
Posted by Mindmaster on July 19th, 2019 @ 8:31am CDT
Oh, they better be doing f***in’ Unicron Trilogy after all this time....

The Micromasters, while kinda boring that they’re just straight redecos with boring names, are a buy for me. Can’t get enough of the nerds.

Odd that they showed off Rung and the new tapes but didn’t officially announce them. Perhaps they’re part of the next line with Runamuck?

I’m hesitant on Astrotrain, but if he’s like Shockwave and is more Voyager-esque with the battle station whatever, I’ll probably get. Titans Return Astrotrain is just meh.

G1 Toy Reflector is a must-have. I have the regular three back in my home state waiting to be sent to me at my duty station, but this set is so unique that it’s worth having. I could always imagine the standard releases as being the clones and the G1 Toy set being the actual guys.

The more I look at Unicron, the less I’m into it. All he’s got going for him is that awesome opening planet jaw gimmick and that he’s f’n yuge and bigly. I know I barely have space in my barracks room for my bigass collection, I don’t know where the hell I’d put him.
Re: #SDCC2019 Hasbro Toy Panel! New Amazon 3 pack with a Powerdasher, Runamuck wins, and more! (2030344)
Posted by Sabrblade on July 19th, 2019 @ 8:39am CDT

Mindmaster wrote:Oh, they better be doing f***in’ Unicron Trilogy after all this time....

Mindmaster wrote:Oh, they better be doing f***in’ Unicron Trilogy after all this time....

There is still that rumored Hot Shot from Hound, and most of the other rumors have come true so far.

I know, but i don’t really have all that much of an attachment to that particular version of Hot Shot. Honestly anything with Armada slapped on it, I will instantly buy.

Forgot to mention too; boxset Impactor looks way better than standard release Impactor, just because of the head. I guess they were trying to do a Marvel look on the standard release, I dunno. A reprolabel should fix boxset Impactor nicely. Thankfully I have a friend that’s willing to split the cost and take the other two, I’ve no interest in Aragon and invisible Mirage.
Click here to view additional comments about this topic at the Energon Pub Forums ...