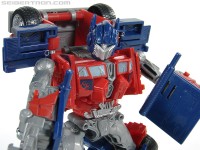 With the release of Transformers The Movie in 2007 we received a massive wave of merchandise, and one of the largest parts of the merchandise was the toyline, which was huge. The line consisted of all the Class sizes we knew, Legends, Scout, Deluxe, Voyager, Ultra (which came later in the form of repaints), Leader, and Supreme in the form of Ultimate Bumblebee.

We also received new size classes and price points, one of which was the Fast Action Battlers, or FAB for short. The range of "FAB" consisted of cheap easily to transform simplistic interpretations of the Movie characters which where slightly larger than a Deluxe but sold at the same price point. Each one of them featured some sort of action gimmick and could be transformed in just a few quick steps, hence the name "Fast Action Battlers". The line returned with Revenge of the Fallen in the form of repaints and new molds.

Seibertron.com now has galleries of all 18 of the ROTF FABs, which you can view by clicking here or on the corresponding images below! The following list is sorted by character and not the original release. Re: Seibertron.com Galleries: ROTF Fast Action Battlers (1165328)
Posted by OlivusPrime on January 4th, 2011 @ 9:16am CST
Not toys I'd want to buy, but a few of them genuinely look quite cool, especially Optimus, Sideswipe, Sideways and Grindor.

The funny thing is that this cheapo deluxe-sized version of Megatron is more screen-accurate than the full size Leader toy!
Re: Seibertron.com Galleries: ROTF Fast Action Battlers (1165373)
Posted by Talous on January 4th, 2011 @ 11:36am CST
FAB's are easy to transform, thus FAB Arcee is easy to transform? I found the toy just as frustrating as the other three (two?) bike sisters.
Top notch galleries as always, looking forward to seeing more.
Re: Seibertron.com Galleries: ROTF Fast Action Battlers (1165384)
Posted by Seibertron on January 4th, 2011 @ 12:09pm CST
Thanks for getting these posted DM. It feels so good to finally have these galleries online. The FABs have been sitting out in my basement/gallery workshop for 1.5 years. I worked on these when I had a spare moment. I finally transformed them all back to vehicle mode and put them all away this morning. Hopefully I can do the same for the Legends class figures that I haven't had a chance to finish yet.

I rather like the Fast Action Battlers. They're fun, simple Transformers that make me feel like the transformations of the old school Transformers isn't a lost art. There's something to be said for pulling the arms out, legs out, and flipping the head over. They're not very poseable, but they're still fun toys to have. They're like giant Legends class figures!

I really like the artwork on the packaging. Do we know who the artist is?
Re: Seibertron.com Galleries: ROTF Fast Action Battlers (1165385)
Posted by Bumblevivisector on January 4th, 2011 @ 12:15pm CST
I like that Megatron too, since his tank mode is kind of like a Metal Slug. In fact I bought one or two whenever he went on sale, so now I have 9 or 10 of him! See, to me he's a troop builder, because if you boil him whole in green dye, he ends up looking like a tank from the Cybertronian army in the G2 comics. Gotta remove the end of the cannon barrel with the bayonet first though, because the soft pvc parts will absorb more dye and turn black (his left arm)