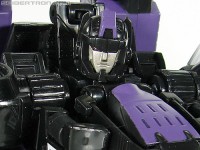 The latest figure to be featured in Seibertron's world famous Transformers toy galleries, is the Japan Toy Hobby Exclusive Dark Skyfire. Dark Skyfire is a repaint version of Classics/Henkei Skyfire, and below is his combat biography translated from Japanese:

Dark Skyfire bio
In an era millions of years before the establishment of the Destron faction’s army, he operated in the same organization as Skyfire. Specialized for outer space exploration, his entire body is coated with a substance that protects it against unknown viruses, magnetic storms, and the like. Although he has a strong scientific curiosity, he agonizes over it being at odds with his great combat skills. Check out the full gallery here.

If you still do not own a Dark Skyfire and are drooling over this, you can always purchase it through our sponsors or eBay.

Stay tuned to Seibertron.com, the Ultimate Resource of Transformers!

Wish I payed attention to him in the past. I'm liking all the new galleries coming out so soon-they look great!

And uh, why can't we have superior Transfomrers like this in the US?

How big is he?
Re: Seibertron Gallery No.2008 - Gentei Dark Skyfire (1065343)
Posted by bvzxa on April 16th, 2010 @ 9:55pm CDT
I have him as well. I like him, then I don't. I wish he were the gray color he was when shown back last year. Also, he's more of a repaint of Classics' Jetfire than Henkei SKyfire. The only thing that makes him Gentei are the chrome boosters.
Re: Seibertron Gallery No.2008 - Gentei Dark Skyfire (1065608)
Posted by Jazz-1982 on April 18th, 2010 @ 8:40am CDT
It is a superb repaint.
I've got him you're right - Dark Skyfire looks really great on display next to other classics figures.
This figure hasn't been anywhere near as popular as previous Gentei exclusives (of course a lot of this is down to him not being a real G1 character) I have a couple more that I'm selling on Ebay but it seems that people would rather buy unboxed Chinese fakes for $30+ than a boxed original for $45. The first exclusive figure I've had that hasn't sold out within 48 hours.
Re: Seibertron Gallery No.2008 - Gentei Dark Skyfire (1065613)
Posted by El Duque on April 18th, 2010 @ 9:21am CDT
Awesome figure, but mine is showing signs of mold wear. Mine's booster pack doesn't snap in very tighly and kind of just lays on top of him in alt mode. There's a couple of other places I noticed where parts seem slighly out of alignment, but all in all still a great looking figure.