Seibertron.com Q&A with Activision, makers of War For Cybertron

Along with getting to talk with HASBRO and Activision about War For Cybertron, we were also able to get a short question and answer session done by High Moon, developers of the game. Read on for more details:

Question: Please reference for us what the play-style will mimic. Will it be similar to the RotF game? How does the gameplay compare to other shooter games such as Modern Warfare 2?

We are targeting not only the Transformer fan but also the hardcore gamer. Gamers can quickly discern the difference between a good game and a lousy one – it has to feel right. We have spent the entire project driving toward the right feel in every aspect of the product so when you get your thumbs on it, it is going to be a great shooter, not just a great TF game. Gears, COD and Halo are all reference games we often look at.

Question: Are there any RPG elements to the game?

Question: Does the game use the same engine as any of the previous Transformers games?

We are using the Unreal Engine, which is the powerhouse behind Gears of War and Batman (along with scores of other great games). No other Transformer game has used the Unreal engine to my knowledge.

Question: Will there be downloadable content to enhance the game?

We are fully committed to this game and plan to support it after it ships as best we can, but we’re not ready to talk about specific details just yet.

Question: Will the story progression be linear?

There are 2 separate campaigns (Decepticon and Autobot) each is completely original and unique, and yes since the beginning we have been about telling a great story so there is a natural progression through it. Both campaigns are unlocked at the start. The Decepticon campaign takes place before the Autobot campaign (but you can play them in any order), and I like to think of it as the prequel game to the Autobot game. Both are full fledged unique stories and levels - players don’t travel through the same level ever! 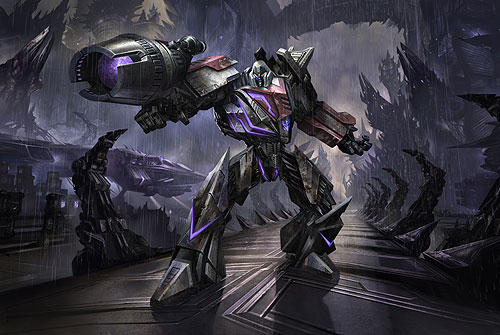 (Click on the above image to view a 3000 pixel version)

Question: Will the transforming be done with a button press or a button hold action?
Will combat damage be self healing over time or will there be an absolute health gauge?
Are both factions playable?
How will the issue of air superiority be addressed for multiplayer? (the flying mechs were vastly more powerful in RotF)

This is a very valid question, however I am going to save my response for a bit until we are ready to talk about all our multiplayer details, which I’m really excited for – stay tuned.

Question: Will there be any epic level battles (Shadow of the Collossus style or Tidal Wave from the Armada game style)?

You see the big guy in the teaser trailer (you know who I am talking about)? How does fighting vs. him sound – epic enough? And we’ll talk about more soon.

Question: What was the most important thing learned from the RotF game that will be corrected in this new game?
At what point in the "War for Cybertron" is the game starting storywise?
Will there be any bonus attacks for characters such as Powerlinking or Minicon boosts from previous eras?
Being that the game is set for all platforms, will each system carry its own version of the game ala Revenge of the Fallen or will every system feature the same campaigns?

The story follows the same major beats on all platforms, but there will be some differences on the NDS and Wii versions. High Moon is developing the Xbox 360, PS3 and PC versions.


Seibertron.com would like to thank everyone at High Moon and Activision for making this possible.

Also, I'd like to give a special thanks to Activision and Hasbro for this opportunity. This was a great collaboration.
Re: Seibertron.com Q&A with Activision, makers of War For Cybertron (1029167)
Posted by Mindmaster on December 18th, 2009 @ 2:25pm CST
Dude, I was just getting syched about the toy thing, but that uncolored truck thing, I was sure fire it is going to be Prime

Re: Seibertron.com Q&A with Activision, makers of War For Cybertron (1029169)
Posted by hippymule on December 18th, 2009 @ 2:48pm CST
I didn't see anybody post this(that doesn't mean they didn't) but that tf toy that we couldn't identifey is optimus prime(cybertron form)! how cool is that! well go ahead spam me about how u guys already knew and stuff.

hippymule wrote:I didn't see anybody post this(that doesn't mean they didn't) but that tf toy that we couldn't identifey is optimus prime(cybertron form)! how cool is that! well go ahead spam me about how u guys already knew and stuff.

And I really hope it can hold it's own in single player.
Re: Seibertron.com Q&A with Activision, makers of War For Cybertron (1029192)
Posted by Fires_Of_Inferno on December 18th, 2009 @ 4:59pm CST
"An emphasis on bringing some very obscure characters into focus for this story was highlighted to us. While no one was specifically named, we were told that they were referring to characters that hardcore, long-time fans would be interested in seeing."

Hm, a few names come to mind with this. Straxus, Jihaxus, Scrounge, Devcon, Rook, Rack N' Ruin, Impactor, Xarron, Liege Maximo, Death's Head, Centurion. Of course I only really know a small fraction of the comic-verse so there could be alot more that I don't know that don't come up often. Still, those guys mentioned would be pretty sweet.
Re: Seibertron.com Q&A with Activision, makers of War For Cybertron (1029251)
Posted by Lastjustice on December 18th, 2009 @ 10:24pm CST
Here's some more info i saw out there.

I keep seeing people mention it will be a FPS, but if it's using the Unreal engine surely it will be an over the shoulder, full on shooter a la Gears of War and Halo.
Re: Seibertron.com Q&A with Activision, makers of War For Cybertron (1029369)
Posted by Cyberstrike on December 19th, 2009 @ 10:26am CST
I find FPS games incredibly boring and repetitive. If you played one you pretty much played them all. Call me old fashioned but I actually like to see the character I'm playing in a video game other than hands and a weapon.
Click here to view additional comments about this topic at the Energon Pub Forums ...