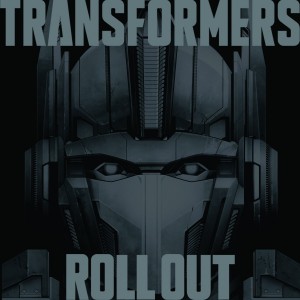 Seibertronians! Lend us your listening devices - as fellow Energon Pub dwellers carytheone and DecepticonFinishline bring us a review of the Hasbro/Sony Transformers 'Roll Out' album, released just last week. Have you been listening yet? Read our reviews - two for the price of one - and head here for iTunes or here to stream on Spotify!

DecepticonFinishline wrote:The new “Transformers: Roll Out” album exemplifies what the last year of Transformers has been all about. With the inclusion of up-and-coming artists Born Cages and Crash Kings; well-established rock acts like Mew and Bush; and fresh musicians like Elle Rae this compilation album parallels one grand theme: Giving the veteran fans what they’ve been asking for (i.e. Combiners) while making it accessible to new fans of the franchise.

Allow me to explain. Devoting an entire year to Combiners seems to be Hasbro/Takara’s way of giving the veteran fans what we’ve desperately wanted. However, to the dismay of many veteran fans, this year has seen many repaints and remolds. I see this as a way to cut costs, making it easier for younger fans to join the franchise with the characters the older fans know and love.

In a similar fashion, “Transformers: Roll Out” is a compilation of music meant to appeal to older fans while at the same time not taking too many risks; making it accessible to as many fans as possible. By sandwiching the most unique tracks like “Count to Ten,” “Modern Man” and “Into the Fire” in between the likes of the more general rock songs “Roll Out” and “Our Revolution” you allow for a listening experience that draws you in and allows you to leave satisfied while also being exposed to uncommon sub-genres of music in the middle that you may not have pursued otherwise.

You’ll notice that the lyrics of these songs can be clearly linked to the Transformers franchise, but are also general enough to be played in other situations without sounding out of place. The one exception, or course, is “Exiles” which drops the name Cybertron. Some may be disappointed in the absence of specific Transformers lyrics but I would point to the famous songs already a part of the Transformers franchise such as “The Touch” and “Dare to be Stupid” which follow the more universal lyrical composition.

So what’s the point? The missing part of the aforementioned parallel is that no one really asked for “Transformers inspired music.” Maybe it’s to provide a voice for artists like Darby! whose song “Modern Man” uses a unique mix of the vocal singing style of glam-rock stars like the late David Bowie infused with a Sgt. Pepper-composition style. Cynics will say it’s a typical cash-grab. Maybe there was just an ambitious Transformers fan at Sony. Who’s to say?

I personally recommend using “Transformers: Roll Out” as hunting music. We all know that this is a full-time hobby, and so it’s appropriate that it has an official soundtrack. Starting with Mount Holly’s (formerly Nick Perri) “Roll Out,” the song says it all. Roll Out for a successful hunt. Then, depending where you live, Mew’s “Count to Ten” times out well with leaving your first stop empty-handed; “Close your eyes. Count to ten,” cool down and then get revved up for your next stop! The compilation is largely a high-energy experience with two mild cooldowns.

Coming from someone who listens to and judges music for a living, it’s easy to say “Transformers: Roll Out” played it a little too safe resulting in some tracks that sound a little too homogenous. Metal and E.D.M. fans will probably be disappointed. But, with compilation albums like this it is important to try your best to appeal to as many people as possible, and this album does that very well. Alternative rock fans, like me, are provided with music by Born Cages and alternative Danish superstars Mew. There are songs that I don’t much care for, but I’ve already seen praise for those songs, here, on Seibertron. That is the point. This album is for all of us to enjoy the songs we will like and still appreciate the musicians that contributed their art to the Transformers franchise we all love.

carytheone wrote:Roll Out is a fun, cheesy and seemingly random album. The overall feel is that of a movie soundtrack and is a little awkward without one.

The album opens with the titular song Roll Out; an appropriately cheesy, driving rock track. A hard hitting, get your blood pumping, kick some Decepticon butt rock song. The song that seems the most out of place, This House Is On Fire by Bush is a serviceable song, but feels like it was pulled off the B side of another album (and in fact, it is, and just repurposed -- Va'al). Gigantik is our first deviation from the more contemporary rock vibe the album started on. This track is more in line with my tastes in the indie rock genre. A fun bouncy track that would feel right at home on a road trip playlist. Count to Ten is a perfectly placed cool-down track. A light airy uplifting track that makes a lovely ascent to one of the albums best bangers.

Into The Fire by Elle Rae is definitely the strongest track on the album and worth a stand-alone purchase. If the last track brought us to the apex of the roller coaster; this track takes us on a fast ride to the loop-the-loop. After the excitement of Into the Fire and a couple repeats we coast into our next cool-down, Exiled. My first listen gave me a Nickleback vibe, but then I came to appreciate the lead singer's later career Chris Cornell voice. This song is clearly written with Transformers in mind and makes a few fiction name drops. This is probably one of the cheesier tracks, but has easily become one of my favorites.

Just a Spark seems like a weak follow up to Exiled, almost feels pandering and is just screaming to be used during a montage. Stronger starts slow but really vamps up very quickly. Another driving modern rock track, Muse fans will be pleased. All this leads to the album's weirdest track, Modern Man. A trippy indie-rock Bowie-esque track that wouldn't be out of place on "Space Oddity". Totally up my alley and a great palate cleanser that ends with a little synth-funk. And that leads us to our closer, Our Revolution. A celebratory driving rock track. Again, I feel like all these emotionally charged tracks are missing the scenes to motivate me to feel attached. I can honestly see the credits of a movie scrolling by while I listen to this track.

Roll Out is a perfectly serviceable album and depending on your tastes is worth the asking price of $10. I can't help but feel that I should be picking this album up on my way out of the theater after watching Transformers 5. I feel that this is one of the biggest challenges for this album; it just doesn't have a real good reason to exist. It's a good collection of music and is a fun ride.

I fired up Transformers: War for Cybertron after my first listen. The album fit the on-screen action perfectly and all the cheesy rock tracks paired great with my WfC wine. I'd recommend giving the album a listen to and cherry picking the tracks that speak to you, especially Into The Fire!

xRotorstormx wrote:Great write up guys! I definitely need to take another listen to the Elle Rae song because it definitely didn't stick out to me on first rotation. My ears have been so jaded over the years

Don't force it or anything. None of them are bad it's just not all the songs are for everyone, especially the ones in the middle of the album. The Elle Rae track doesn't really stand out to me either, but I can totally see why people wouldn't like the track by Mew, which was my fav.
Re: Seibertron.com Review - Hasbro and Sony Transformers 'ROLL OUT' Album (1782735)
Posted by Va'al on April 19th, 2016 @ 3:38pm CDT

xRotorstormx wrote:Great write up guys! I definitely need to take another listen to the Elle Rae song because it definitely didn't stick out to me on first rotation. My ears have been so jaded over the years

Don't force it or anything. None of them are bad it's just not all the songs are for everyone, especially the ones in the middle of the album. The Elle Rae track doesn't really stand out to me either, but I can totally see why people wouldn't like the track by Mew, which was my fav.

I do like Count to Ten, and in the first batch of songs was actually my favourite too; I think what happened was that Into the Fire brought more bite where I wasn't expecting any, and that hooked me up. I still have difficulties dealing with Modern Man, as it's a little toooo obviously Bowie-influenced.

I'd never have pegged you as a metal head

I like to take a trip down that rabbit hole every once in a while.

After reading what everyone has to say about Roll Out, I think I'm going give it another listen as I slip into dreamland.
Re: Seibertron.com Review - Hasbro and Sony Transformers 'ROLL OUT' Album (1782853)
Posted by Va'al on April 20th, 2016 @ 2:45am CDT

I'd never have pegged you as a metal head

I like to take a trip down that rabbit hole every once in a while.

After reading what everyone has to say about Roll Out, I think I'm going give it another listen as I slip into dreamland.

Ask Ryan - my soundtrack to work and his are veeeeery different.
Re: Seibertron.com Review - Hasbro and Sony Transformers 'ROLL OUT' Album (1787499)
Posted by Va'al on May 7th, 2016 @ 12:57pm CDT
Coming in the aftermath, but not yet afterlife, of the Sony/Hasbro collaboration on the Transformers Roll Out album, we have news of a contest over on the AV Club to win a one-of-a-kind Transformers turntable set with the artwork from the album, as you can see below - check it out!


To coincide with the release, artists Jim Harper, Don Fedorko, and John Beck have created a one-of-a-kind Crosley C200 Turntable, featuring the visage of the Transformers’ fearless leader, Optimus Prime, etched into the plexiglass lid. Take a look:

Re: Seibertron.com Review - Hasbro and Sony Transformers 'ROLL OUT' Album (1787721)
Posted by Alpha Dominus on May 8th, 2016 @ 9:19am CDT
The Crosely logo is on two seperate areas on the etching if you compare the photos. Looks like a bad photoshop job. Otherwise nice! I need a new turntable so perfect timing!