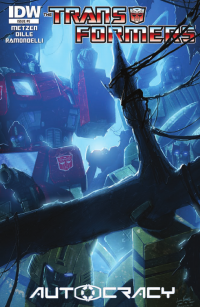 Transformers Autocracy, the online-based comic from IDW is now into its 5th issue, and things are finally starting to fall into place. Having been blown up in Nyon and letting Soundwave escape into the Decepticon controlled Kaon province, Zeta Prime has given Orion and his team a final chance.

To prove they are worthy to be the Autobots' elite they must track down and bring to justice a dangerous terrorist called Hot Rod, but – as is always the way with these missions – things are never what they seem. As a reader we already know that Hot Rod is no terrorist, and we know that he won’t be killed in this story, so initially this issue seems a bit... pointless, but that couldn’t be further from the truth. What transpires will likely be the turning point everybody has been awaiting, explaining why these much loved Autobot legends acted this way until now, seemingly so out of character from their 'modern' counterparts, an oft-used but well employed trick here by Metzen & Dille, as they realise this historic tale in a far more subtle fashion than the clumsy Megatron:Origin that came so long ago.

Um... minor niggle, but they do know Condors haven't evolved yet, right?

The newest addition to the cast, Hot Rod has a minimalist but recognisable design that could almost be regarded as too simple coming mere moments after the latest MTMTE issue has him in glorious technicolour detail, but in this context it works and despite his garish colour scheme he fits the comic's aesthetic. Again, Livio Ramondelli’s artwork is stunning and atmospheric and the ending reveal is nothing short of spectacular, as you can almost see the gears moving inside Orion’s head as he wrestles with his conscience whilst Zeta's plan goes into action.

Only available in E-format on PC and iPhone/iPad, this inexpensive and enjoyable story comes recommended mainly for the completionist and those who really want to know where it all began, as it may be a bit too 'arty' for those used to the more colourful and clearer designs of the two main ongoing runs, but if you have stuck by the series this far then you won't be disappointed.