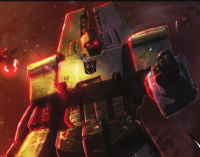 SPOILERS!
Transformers: Autocracy ended its 6th issue with a killer cliff-hanger. Orion Pax, choosing to stand against Zeta Prime and to try and defend the province of Nyon is defeated by Zeta's ultimate weapon, the Vamparc Ribbon – a weapon that drains the life of anyone around it and turns it into raw power for the wielder. Fallen and at Zeta’s mercy, what will become of our hero now?

Timed to perfection, Metzen and Dille reunite our two champions, again on Megatron's terms, and Megatron himself is every bit the leader we all know him to be. They also delve that little bit deeper into the relationships between the two factions and whilst there are no real surprises, Shockwave, Starscream and Ironhide are all allowed enough time to show the uneasy tension between the two groups and demonstrate those characteristics we all either love or hate about these story staples.
Even Hot Rod fills an interesting role as Pax’s conscience, a clear foreshadowing of his future self, whilst Pax wrestles with the qualities he will eventually become so famous for.

Just how old do you need to be to still count as an 'old timer' 9 MILLION years ago?
Ramondelli’s art, as always, is glorious. The dream-like style that is his forte just blows you away with the colours and textures and, even if it still lacks definition up close and it can be hard to distinguish one character from another at times, the iconic final panel that has become his signature of this series punctuates with his usual flair.

And that is a smurfing big mushroom!

As this series continues to develop, the long term impact upon every single IDW comic, past and future, begins to come into focus. What was hinted in Megatron: Origin about the future relationship between Pax and Megatron begins to clear and the real question now is how a story such as this, which begins to scratch the surface of how the one-day Optimus Prime and his archenemy-cum-oldest-friend truly got to know each other, is left languishing as an online-only novelty comic when its insight will clarify a hundred questions, although no doubt raise a thousand more.

Do it Pax! What could possibly go wrong??

For those with a lifelong interest in everything Cybertronian, this exodus chapter of everything we thought we already knew is almost indispensable. This story is literally history in the making, but it is starting to get out of reach for the more casual reader, at this point in the story only serious fans really need apply.