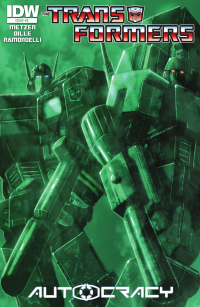 SPOILERS
Part 8 of Autocracy is finally here and with only 4 issues left to go this story is approaching its climax. Last time we were left with Megatron and Orion Pax teaming up as partners and preparing to battle Zeta Prime in the aftermath of Hot Rod’s sacrifice of Nyon city to keep it out of Zeta’s hands. Now, with the Decepticons' and Pax’s force of renegade Autobots working together, the tables have been turned and Zeta Prime and Iacon itself become the target.

Evil must always be SHINY!

Upon first glance at this issue, it’s instantly apparent that this contains something that the previous 7 seem to have lacked slightly and that’s characters. Whilst this story has until now focused tightly on a limited few - our three leads, the Pax team and Soundwave principally, this issue really lets rip with the characters involved.

Exactly how far back do we need to go before Ironhide becomes a 'young' timer?

Unfortunately this is also where the art suffers a touch. The scenic shots and atmosphere are, as always, a spectacle but a constant niggle has been the rendering of robot detail, faces especially, to paper and the use of artistic licence again leaves characters recognisable but ill-defined. Up until now that wasn’t really an issue and probably the reason his style worked so well in this story but didn’t look quite right in the Chaos arc last year, but it does become that little bit more obvious in an epic like this. One thing I will say though, his depiction of Pax and Megatron leaping from Astrotrain is of the highest standard and his forte is definitely the action shot, it will be interesting to see what project they have him on once this has finished.

I am having this picture painted on my ceiling. Seriously.

The story itself is finely tuned and straight forward; Metzen and Dille use the age-old 'good guys and bad guys team up to fight an even greater evil and go on the offensive' trope excellently. The character interaction is good, if a tiny bit forced, but the huge fight itself is well choreographed, has plenty of action and its conclusion will leave you speechless.

Another short, sharp lesson in Cybertrionian history, complete with cliff-hanger ending in true Transformers style, this consistent and entertaining short-format comic yet again gives us a window into Megatron and Primes distant past. And then smashes it through with a size 95 boot.
Read it, this is a history lesson we all need.

I still really think the art relies on the story too much at times, rather than being a compliment to the story. I'm used to it, but it becomes more hindrance than help at times.
Re: Seibertron.com Reviews IDW Transformers: Autocracy issue #8 (1377260)
Posted by trence5 on May 5th, 2012 @ 8:36pm CDT
Sorry I do not remembe if I've asked, or anyone, but has anyone seen Zeta Prime's alt mode yet?