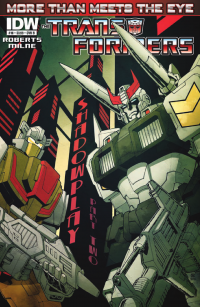 The end of the month of October means Transformers: More Than Meets The Eye Issue #10, and in turn, Shadowplay Part II. I find that Transformers fiction dealing with flashbacks has so much more meaning than other franchises. This is simply because this fiction is a medium that fans have been waiting for. To me, there's something enjoyable about seeing Orion Pax in action before he held the mantel of Autobot leadership. Or maybe the flashback themes are good because it's when Roberts is at his best? Either way, us Transformers fans are in for some fun with this week's addition. This issue builds upon the relationship of Prowl and Chromedome - a pseudo Transformers Holmes and Watson. I can understand why we are focusing on Chromedome, and by all means it is extremely fun to read. Ultimately I find it is interesting that the barrier between RID and MTMTE is slowly disappearing as Pax and Prowl, who are both MTMTE mainstays, are now the main focus in MTMTE.

We also see how Whirl and his Wreckers past interlinks with Pax once again (He had his antagonistic portrayal in Ongoing #23). I was questioning Whirl's motives during the Fort Max arc, but I'm starting to appreciate his character. I still hope Cyclonus gets to beat the crap out of him, but hey, one step at a time here!

Concentrating on current events, the issue brings upon us some dialogue between Cyclonus and the big three. I've always appreciated Cyclonus' presence in the comic, and while I have grown akin to Drift, his personality is starting to bug me. If you're a newbie, occasionial or devout Transformers comic reader, just pick up More Than Meets The Eye. You're not going to go wrong, especially not with this issue.