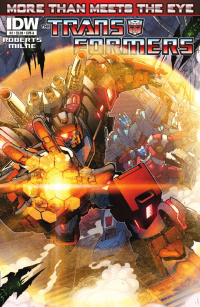 Close Encounters of the Robocarnivore kind.
When you ask Google what "More the Meets the Eye" means it helpfully tells us "it is the second full-length studio album by Dutch pop and dance singer eliZe, released on June 26, 2009." Hmmm. Jeeves, however, is more helpful:
"What you see is not always what you are getting..."
Much can be learned from this.

This is the 3rd issue in an ongoing series and, just like the previous issues, it is dialogue driven, fast paced and an excellent read, but you already knew that as you bought issues 1 and 2 so know what to expect.

Can anyone else not stop staring at his chin?

This series' main advantage - focusing solely on a contained group - allows the individual quirks and personalities to shine. It's clearly not an accident that many of the characters featured in this arc have had limited appearances (if at all) in previous books as this allows James Roberts freedom to really flesh out his creations, to nurture and guide them as they react to the perils of being lost in deep space. Incredibly, he still manages to further develop the better known characters, Rodimus being the most obvious example - the brash, impetuous hero willing to take that risk because he knows he really is that good, is a welcome change from his post-AHM petulance and selfishness, and how most will have imagined him for many years whilst being left disappointed until now.

There is so much awesome in these two panels I don't even know where to start!

Alex Milne uses his art, attention to detail and ability to set a dramatic scene to compliment the story perfectly, directing your attention to the smaller details such as Tailgate's transformation jam, Brainstorm's short but important scene and the contents of Skid's right hand - explained almost entirely through the art, using visual clues to compliment a story that doesn't require weighty narrative as your eye automatically searches them out.

Where am I going with this you may ask? The clue is in the title. On first glance, MTMTE is a comedic jaunt through space. Rodimus' response to the news of the ship's unwanted guest and the unlikely Chromedome and Rewind double-act are both executed effortlessly, as are all the light hearted interactions between the various brash and bold Lost Light crew members, but scratch beneath the surface here and there is a much deeper tale to tell with subtleties and hints that, upon closer inspection, show there is definitely more to this comic than just a shallow comedy romp through space – and not just Drift's new 'enlightened' philosophy. Brainstorm's briefcase. Skid's memory gaps. The Duobots' actions in the engine room. Rung's part in ...well, everything.
All these little details cued up and ready to be answered.

You could try asking Michael Bay?

In an effort to avoid too big a spoiler, I won’t go into too much detail on the 'Sparkeaters' but for many of you there will be a clear - and no doubt intended - parallel with what is arguably one of the best sci-fi/horror movies ever made. This only serves to further raise the expectations for the series, and I really hope Roberts has this planned to the finest detail, as it would be a tragedy to see the story get lost in the minutiae.

Without doubt though, this is a superb comic, entertaining, enthralling, exciting, and certainly much more than meets the eye.

Posted 2 days ago
News Categories: Toy News, Movie Related News, Cartoon News, Comic Book News, Site News, Rumors, Event News, Digital Media News, Collectables, Sponsor News, Game News, Site Articles, Store News, Company News, People News, Press Releases, Reviews, Sightings, Unlicensed Products News, Auctions, Transtopia, Interviews, Knock Offs, Collector's Club News, Editorials, Heavy Metal War, Podcast, Contests, Book News, Top Lists
Click here to post your comment about this news story!
Re: Seibertron.com Reviews IDW Transformers: More Than Meets The Eye #3 (1358612)
Posted by Prime Evil on March 15th, 2012 @ 8:43am CDT
Another great issue. As this series continues, we are definitely getting more and more characterization of the crew of the lost light. It's great to see how the cast is starting to really jell and find their roll in the series. Swerve is a standout character. You can see that by the response in the fandom that have read the title so far, but for me, when the issue ended, I find myself really gravitating towards Tailgate. Especially the very last panel. Love how out of all the guys on the ship, that it would make so much sense that he and Cyclonus can actually relate to each other. Kinda.

On occasion, I want to get a toy figure of a character from the comic book because I really like them. Never before have I wanted a G1 figure to represent a character though. The size of Tailgate and Swerve and their looks makes me want to get their G1 brick counterparts, no Classics figure needed!

We have seen from the Singapore convention this past weekend that there looks to be a Swerve in the works using the Generations Kup mold. Y'know what, I don't want that. I'll take the G1 figure over that, and that's because of the excellent writing of this comic.

There's only 1 character that I'm not really feeling and that's Drift. I'm a Drift fan BTW. I enjoyed his back story and how he was done in his mini series. But I really have a hard time imagining this once uber killer for the Decepticons has now gone extremely soft. Not talking about his skill, but just his demeanor. He was so tough that when he betrayed his superior commander (Turmoil), Megatron sent a bounty hunter to bring him back. Not kill him. That's how ruthless he was and important he was to Megs. I know, most will say that he has changed because of what happened when he got reborn, but that feels like such a drastic change to another character. I didn't mind the silent Drift, but the super happy guy that he's become is not something I care for. It's still early so I'm waiting for him to be in some serious situation that may bring out the Drift he once was.

Now the only bad thing about this series is when done reading, you gotta wait a whole month for some more fun, action, and adventure.