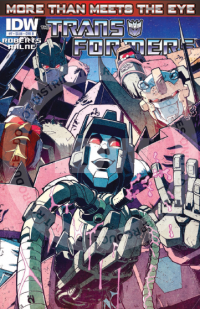 With a jaw dropping sequence and cliffhanger in the last issue of MTMTE #6, and with what feels to be the longest wait I have ever had for a comic book to be released, we now have Transformers: More Than Meets The Eye #7. Unfortunately, I have to say with the wide range of emotions that I have had in this half year from MTMTE #1-6, this issue doesn't exactly match the pace of it's predecessors. In my attempt to keep this review as spoiler-free as I usually do, I will try my best to relate more to the themes and tones of the comic book, rather than the events that happen. Don't infect me with Bieber fever!

You might ask, how does #7 slow things down? We now realize that Overlord is on the Lost Light, shouldn't that snowball into some awesome killing and epic destruction? Sadly that's not how it is, and I do understand why. LSOTW was a 5-part series, MTMTE is an ongoing that, as much as we know, is going on for a very long while. Roberts is slowing it down, but still keeping us hooked by throwing us a few tidbits here and there - whether those tidbits be character building for our massive roster, an addition to our already large cast, or a horror from the past. So that's why Brainstorm likes being alone...

Another aspect that forces this issue to slow down is due to the theme for this month. IDW has labelled July 2012 to be Decepticon Month, as you may have noticed in Robots In Disguise #7. This issue features not one, but two new groups of Decepticons that add a darker tone to the series. Yet at the same time, they take away from the screen time for those on the Lost Light. Who are these groups? The first is one you've already heard many times over, the Decepticon Justice Division, or shortly, the DJD - a group of Decepticons bent on punishing fellow 'Cons who disobey or abandon the Decepticon code. You don't need to be Perceptor to put two and two together - there are a handful of suspects among Rodimus' boys who would be on the hitlist of the DJD. With the majority of members among the Lost Light no longer shooting at each other, it's evident that these guys are our new antagonists. The other group of Decepticons is an interesting story, and in it's own right, could fit perfectly on the Lost Light. The group features a ragtag number of Decepticons, rounded out by even more misfits. What I find special is that with the war between Decepticons and Autobots over, it's not the machines bred for war that just survive, but it's those who had normal lives and practicions too. It's certainly not a tone we get to see regarding Transformers fiction very often, so it's a treat to see how some cons deal with the feeling of 'freedom'.

Occupy Cybertron! We are the 1%

While I might allude you to believe that #7 is just filler, it is certainly not. It's a great setup for the future of the series - we don't get immediate closure of the events that occured in MTMTE #6, but we do have leads to events that might happen soon. We get a good introduction to future villains of MTMTE, and just like in Issue #6, you always, always, always have to check out the last page. What just happened in this thread...

Nice spoiler-free review, by the way!
Re: Seibertron.com Reviews IDW Transformers: More Than Meets The Eye #7 (1404183)
Posted by Chaoslock on July 25th, 2012 @ 5:06pm CDT
Just read it, and I think it's way better than the review says - yes, it doesn't solve misteries that were in the viewpoint with the last issue, but it solves others - one that involves Skids, with a way of a very possible future story.

I love the way of how the big-scale war was described - before/without protocolls.

Wow. The last page really is a kick.
And the Decepticons we meet after the DJD are quite the bunch.

Still think the first five pages are some of the best I've read so far.