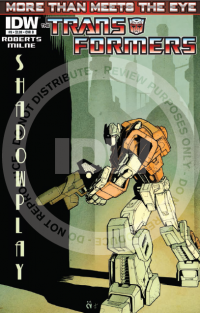 The Roberts/Roche/Milne ship rides out for another September voyage, with Transformers: More Than Meets The Eye #9. By far, I feel that this was the funniest and most enjoyable issue for me out of the current era of IDW Transformers comics. Even if you take a quick glimpse at the preview, you can get the general jist of how the MTMTE creative team gets you interested and hooked into every page and panel. Robert's medium in Shadowplay (and much like previous issues), is the wonderful characterization and fleshing out of these 'B-List' Transformers. Shadowplay brings us back to the past and shows us how these comrades on the 'Lost Light' are more intertwined than we previously thought they were. Part One shows Chromedome's past, alongside the seemingly unpopular Prowl. Providing the suspense in this issue, it's fair to guess that this leads us to a better understanding of why Chromedome is the bot he is now. We continue to look back into the past, as we see how Drift, Ratchet, and Orion Pax have crossed paths before. Shadowplay starts off where Ongoing #23 (what I feel is the best Ongoing issue) left off, and gives us more material on as to how Orion Pax became Optimus Prime. The interaction between Drift and Ratchet, past and present, is also pleasent to see.

Not forgetting about the other bots - Eject, Swerve, Skids and Whirl look to be fleshed out in the next issues of Shadowplay. Unfortunately it's not all roses, as one bot survives, another falls.

Overall, Shadowplay is a blast. The fact that Roberts can manage to have three scenarios that are equally interesting (two of them aren't even in real-time) is a tribute to how special this comic is.