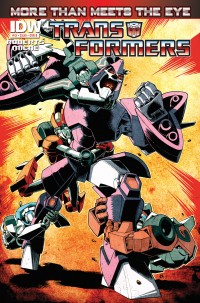 
My goodness, it has been quite some time since the last issue of Transformers: More Than Meets The Eye! This week, the drought ends with the thirteen issue, which is released with not just one other, but two other comics, in this IDW Transformers heavy week. Likely many have already seen the recently revealed cover for this issue, and were happy to see human holomatter avatars. All I have to say is that these characters are already so dynamic and human in my book. Our cast of a dozen or so Autobots have all developed well, and as fans we've grown attached! This issue self proclaims that it is all about rest and relaxation - for once the bots of the Lost Light are putting down their guns, and in turn I believe we got one of the best issues of the series yet. Roberts skill is dialogue and while we've grown accustomed to war time dialogue in recent issues, it is in this downtime dialogue where Roberts shines. Stylistically, we do have a change in the artist roster slot, as Guido Guidi subs in for Alex Milne. I do have say that Guidi's style fits in with this issue's theme, and if you're not a fan, Milne will be back under center in Issue #14. The nods and recognition of prior IDW Transformers lore and the comics fanbase is adamantly strong in this issue, with appearances by Verity, Nova Prime, Blurr and 'Mary Sue'. Sadly, not all the characters get to receive the focus in every issue. Ultra Magnus provides phenomenal dialogue, while Swerve and his 'friendship' with Blurr is given a little twist! The dynamic between Cyclonus and Tailgate is extrapolated and built upon. The highlight of this issue has to be the holomatter avatars - Whirl's just keeps making me laugh. This is hands down, the funniest Transformers issue we've had in ages, and at the same time, still holds significance in this series. Everything about this issue was grand, sans for the little RodimusxDrift panel that will be haunting my dreams for awhile, although I'm sure it will be in some fangirl's dreams for days to come. Looking forward to this, will read the review once I've read the comic myself!
Re: Seibertron.com Reviews IDW Transformers: More Than Meets The Eye Ongoing #13 (1460976)
Posted by sabrigami on February 5th, 2013 @ 8:32am CST
Omg I need to make a Whirl custom right now (and also adapt him for my avatar). Now, I've never seen doctor who, but isn't Skids modeled after one of the many doctors? Why doesn't Rung look steampunky? In that pic he reminds me of someone else but I can't quite put my finger on it... I particularly enjoyed the serious streak running through Swerve's narrative.
It's obvious that you can't be that 'bouncy' all the time.
And glad to see Cyclonus warming up to Tailgate, too.