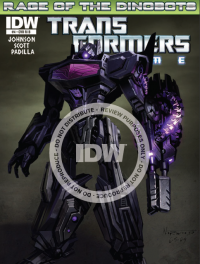 Rage of the Machines

(Spoiler free-ish)
The month of February brings an end to the latest IDW four issue Transformers series, Rage of the Dinobots. For those who have been enjoyed the 'of Cybertron' video games series, is a fan of the Transformers Prime universe, or likes the Dinobots in general, then Rage has been decent series. While not exactly at the same echelon as MTMTE or RID, Rage extrapolates the story left behind in Fall of Cybertron, although the series itself has been reminiscent of Movieverse comics.

Enter Shockwave. The Decepticon mastermind has been silent in the past three issues, with his goons doing most of the work to Ultra Magnus and the Dinobots. His characterization is much like the one in FoC, cold, calculated and always having a backup plan up his sleeve.

It is a shame that there has yet to be a signal of the Prime cartoon adding more Autobot characters to their roster, as Grimlock, the Dinobots, or even Ultra Magnus would add an even greater dynamic to the show.

I think one of the bright points of the entire series is the unmasking of Grimlock. Just a really nice touch by the artists.

Overall, Rage of the Dinobots has been a generic series that provides a link between the events of Fall of Cybertron, and to our current cartoon. I think from first glance it is easy to tell whether or not this is your cup of tea - the paperback will be released in May.