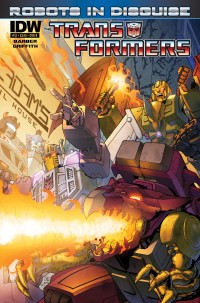 If you've been following Transformers comics as of late, then you would have noticed that there has been a resurgance in the Robots In Disguise camp. No longer More Than Meets The Eye's little-kid brother, the RID series is picking up heat and is becoming a well polished and refined Wednesday read. In recent issues, the political powder keg in Cybertron has been foaming over of the top. With a year full of comics in the books, and a new year ahead of us, it's fair to say that RID #13 is the trigger that starts it all. While some may argue that it isn't Transformers if there aren't Autobots vs Decepticons, in IDW's Transformers, we've had our fair share of clashing between the factions. Ultimately peace was found through a controversial Ongoing series. However when the peace consists of the Autobots acting as sovereigns, and the other factions, the NAILS and Decepticons, being oppressed, then the peace is far from ideal. Enter Megatron. With his return in RID #11, the cohibitation between 'bots, 'cons and NAILs set up by Bumblebee and friends is slowly evaporating. Old habits return, and old factions are revisited. One of the biggest flaws in the Autobots' reign over the reborn Cybertron is that they were content with playing politics, which slowly allowed their enemies to regain their strength in the shadows. Prowl has been an intriguing character - some argue that he's not being written as he should be - some believe he's a gimmick in this series. I think Barber and Roberts have done a great job in writing him, they've molded him into something real - his actions in issue #13 certainly explain his actions ever since Ongoing split into RID and MTMTE. RID #13 is really good - Barber and co. have evolved their game. It's worth the price and just, wow, it's a shocker. It was released last month. There was a preview, but I don't remember a review made for it. It was actually a great issue. a must read for MTMtE fans

On topic, I may just pick this up today. I haven't read the series so far, but I can't miss more Prowl development. I've missed him so

Re: Seibertron.com Reviews IDW Transformers: Robots in Disguise #13 (1453080)
Posted by #Sideways# on January 8th, 2013 @ 9:47am CST
Prowl is looking kinda like Christopher Nolan's Batmobile in his vehicle mode...


"I swear to Primus, I didn't know anything about the Decepticon attack!"


Looking good. I might have to pick this and RG1 up soon.
Re: Seibertron.com Reviews IDW Transformers: Robots in Disguise #13 (1453129)
Posted by T-Macksimus on January 8th, 2013 @ 1:21pm CST
Is it just me or does Prowls alt. mode now bear a striking resemblance to WWI Optimus?
Would love to see some of these characters hit the shelves in toy form to go along with the FOC/Generations lines.
Also, it's about time we get to see Prowls last nerve finally snap. Arcee and Drift have already been established as the sword wielding bad-asses but even Drift seems a bit...neutered... compared to what he could be. Watching Prowl travel down this inevitable dark path has just been delicious, wicked fun. I can't wait to see just how far down into Hell he's willing to drag the rest of the Autobots to maintain order on Cybertron. I'm thinking that even Megatron is going to be rattled by the coldness of all this when it's all over with.
Re: Seibertron.com Reviews IDW Transformers: Robots in Disguise #13 (1453132)
Posted by Blurrz on January 8th, 2013 @ 1:33pm CST

I think this is a must read for all Transformers fans.. it's just awesome.

I sorted it out with my retailer: they just had a late shipment, and I'll pick it up tomorrow!

Looking forward to both of these.
Re: Seibertron.com Reviews IDW Transformers: Robots in Disguise #13 (1453147)
Posted by Nemesis Maximo on January 8th, 2013 @ 2:28pm CST
I actually like this serial better than MTMTE. Maybe that's 'cause Prowl is dodgey again!

But I also like the slower pacing; it reminds me of Furman's early run in the IDW comics.

Definitely looking forward to next month's issue!
Re: Seibertron.com Reviews IDW Transformers: Robots in Disguise #13 (1453518)
Posted by El Duque on January 9th, 2013 @ 4:33pm CST
The official Transformers facebook page has posted a Creator Commentary for Transformers: Robots in Disguise Ongoing #13. Series writer John Barber gives us his thoughts on the first five pages, which we've mirrored below for those without facebook access.

PAGE 1- Starscream is talking to the comatose Megatron, who was heavily blasted by the Autobots in the previous issue. Given these 2 have so much history between them across the Transformers franchise, how do you go about putting another spin or direction with them, showing us something brand new between them?

JOHN BARBER: I think there’s been a conceptual change in their relationship. It isn’t that Starscream is trying to usurp Megatron, or trying to fill Megatron’s shoes anymore—it’s that Starscream has found more of a Starscream-way to get what he wants. The problem is that he knows Megatron will bring in the old status quo of Autobots versus Decepticons—and Starscream knows neither of them will win that way.

In next month’s TRANSFORMERS SPOTLIGHT: MEGATRON comic that Nick Roche wrote and drew, we see them at an earlier point in their history—not long before the start of the current ROBOTS IN DISGUISE and MORE THAN MEETS THE EYES comic book series, The relationship then is very different. I think comparing the two comics really makes the changes that occurred to Starscream over the last couple years.

PAGE 2- Starscream continues talking to Megatron, until he sees him smile. Right now, does Starscream really believe in the whole peace concept, or could this just be another one of his games that he plays?

JOHN BARBER Starscream is a complicated fellow. This whole issue is from Starscream’s point of view—and it’s the second of those in a very short amount of time. So despite the fact that we, as readers, really get to see in Starscream’s head… I don’t think the answer to what Starscream really believes in is clear yet.

I think he’s being pretty honest in what he says to Megatron, though.

PAGE 3- Starscream reacts to Megatron’s “smile” as rioting continues on Cybertron. When planning out RID, was this scene something you thought up very early and worked on from that point?

JOHN BARBER: Well, Megatron’s return was part of the story from day one, and the impact that return would have on Iacon was planned from the beginning. Starscream’s relationship with Megatron—or his relationship with the idea of Megatron—was definitely key to the whole story of RID, so that was pretty solidly in place.

The idea of Starscream trying to talk Megatron out of what Starscream assumes he’s doing… that came a little bit later. I mean, the series wasn’t constructed to work toward this scene; this scene came out of what the story was working towards.

PAGES 4 and 5- Chaos continues on as Needlenose continues to lead the rioting and Starscream reflects on what happened the previous year and where he stands. Is the established peace about to literally blow up in its face from this point? The planets future is starting to look dark again.

JOHN BARBER: I don’t know if it ever looked that bright. But you’ve hit the question right on the head, so to speak. There are enough Decepticons—and we’ve definitely seen enough Autobots, too—that, at some level, want the war to continue. It’s the only life they’ve known, and there are also millions-of-year-old resentments that don’t die easy. The Decepticons have been pushed to the side for the entire run of RID. There’s only so far you can stretch them before they break.

Re: Seibertron.com Reviews IDW Transformers: Robots in Disguise #13 (1453623)
Posted by Downbeat on January 10th, 2013 @ 12:07am CST
Holy cow, I love this comic.
Click here to view additional comments about this topic at the Energon Pub Forums ...