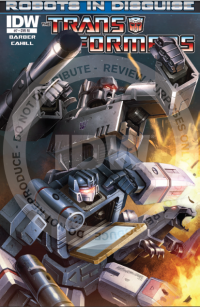 Fast forwarding a week, we as readers now partake in the adventures of the other half of the Transformers we endearingly care about. With issue #6 having Optimus Prime at the centerfold and issue #5 mostly featuring an Ironhide monologue, Transformers Robots In Disguise #7 looks to bring us back to the core cast of characters in the story; and reflects on the cohesion between Autobots, Decepticons and Nails. While MTMTE is more of the Lost, or Supernatural of Transformers, I feel that RID is alot like, or atleast yearning to be like Friends. Except there's a depressingly low number of fembots, and there are bots.... killing each other. With RID, I feel that there's so much tension that you can cut it with a knife. For the foreseeable future, the three factions seem to have a mutual understanding of each other, but as readers and Transformers fans, we certainly know that something will make the bomb start to tick. Enter the plot device of Cybertron being reborn, signalling to the Universe that all Cybertronians should return to their mother planet. With that John Barber can bring back just about anything into the fray once more. And knowing the Transformers mythos just about anything turns into just about everything- Our favorite robots tend to not realize what it means to be dead. Wheeljack, after reading 50 Shades of Grey

Having Brendan Cahill return to the helm in the arts department, we have a very nice look into the mind of one of the central characters, Wheeljack. As you may have seen in the preview, the engineer and inventor has a very artistic way of seeing matter. With a myriad of different characters and personalities in this cast, I find it most interesting that Prowl, the cold and concise law enforcer, is the one starting to lose his edge in all of this - yet the radical and free-minded Wheeljack is the one who is looking at the current situation and assessing it piece by piece. Yet it's not just these two Autobots either, but really the entire cast of RID. Do we truly know everyone's motives now that we have this alliance between two once warring forces, and the other faction completely disenchanted by their brethren's struggle for power? I'm not even sure if I know my favorite character anymore. The information broker and elusive secret agent is now a bartender, something he envisioned as a racer, yet put on hold for eons due to the war. will he ever find solace in this new occupation or will he find means to pick up the gun once more? MTMTE and RID show me that every character has a role to play, maybe even Sky-Byte. The other half of the story focuses on Metalhawk, a character that relates to peace and understanding. While peace is something that the current Cybertronians strive for, I really don't think the Autobots and Decepticons can handle it. There's just so much sensitivity among some factions, and some still don't give a lickity split about how other factions feel. Take for example in this issue - Wheeljack has to do an action all by himself which would result in death if he was found, instead of the Autobots simply showing an act of force and boarding the ship. Stress, mistrust and tension blanket this series like the pollution in New York City. Old wounds just never heal.

Nail to the hammer