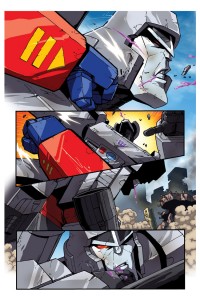 Not The Crossover We Need, But The One We Deserve

Transformers. Crossovers. Not two words a typical Transformers comic fan wants to hear in the same sentence, but alas, what appears to be annual IDW tradition is on our front doorstep once more. Given to us by what is now a well-rounded cast of Transformers writers, artists, and editors alike, is Mars Attacks: The Transformers! If you're looking for a Christopher Nolan-esque campy, serious and overdramatic theme, or a continuation to the current Ongoing TFs series here in this comic, then you have found the wrong place. If you like cheesy Martian themes, mixed in with over the top, wacky and silly fun, then this one is for you. It's hard to not take a critical look at this comic, especially as this comic features the likes of Guzman, Perez and McCarthy, all of which who have made their mark on the Transformers Ongoing brand. However, it's fair to say in order for you to enjoy this, you have to accept that this is a parody of the G1 universe and it is essentially poking fun at itself. That is what makes it great! Unlike previous crossovers, which were essentially inkfodder for the printers, Mars Attacks: The Transformers is enjoyable because it doesn't take itself seriously. I find it funny that by taking a look at Mars Attacks, it reminds me why the live-action Transformers movies always bugged me. If the fictional Martians can't do anything to the Transformers - Okay, maybe I gave away what happens in this comic, but did you really think any being to call Cybertron their motherworld would lose to these slimy scum? Anyways, yes, martians versus Transformers. It's essentially much like humans versus Transformers. As much as it is lovely to have human characters in the Transformers verse; as they provide a mirror, in which we can see ourselves being there; and a window, in which we can see how they feel, they absolutely stand no chance against these hulking behemoths of steel. That's why More Than Meets The Eye and Robots In Disguise are so darned good. They provide an outlook for the characters that we truly care about - the giant robots. Yeah, he got it blasted off. Then slapped Cliffjumper with it!

Yeah, he got it blasted off. Then slapped Cliffjumper with it!

This scene alone is worth the cost of the book. That was absolutely hilarious and such a classic Ironhide thing to do. I can't wait to get my hands on a copy to see what else they pull with this one. Should be great fun.