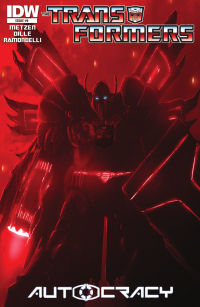 IDW hits the half-way point in its Autocracy story arc and Orion Pax and his counter-terrorist unit are faced with the ultimate choice – follow Zeta Prime as he placates the dissidents of Nyon using extreme force, or to aid Hot Rod and the rebels of the province, tuning their backs on the Autobot cause, and proving Hot Rod (and Megatron and his fledgling Decepticon faction) right about Zeta.

In another short and punchy issue, Metzen and Dille show they still know how to grab your attention. The opening page of Zeta Prime initiating his assault with his vamparc-enhanced Omega Destroyers, especially in light of the last issue's revelations, very much reinforces upon us the concept of the Autobots of this era being the 'oppressors' and places our heroes in a no-mans-land that we are all too familiar with, speeding up the pace of the overall story and giving us a taste of what is sure to be a much awaited battle between the Primes, both past and future.

As always, the Ramondelli artwork is also a spectacle. Following the glorious wide shot of the Omega Destroyers moving on Nyon wrapping the last issue, this retains its dream-like aesthetic in its light sources and dominant colour and although it's a style still far more suited to the wider shots than the close ups, it is enough to make you want to read this for the imagery alone, almost as if the dialogue feels slightly in the way of the pictures.

The Narrows? Cops only go there in force.

This is a good read, it's only negative is that it feels too short - but that is as much a testament to the story’s creators ability to write an engrossing story as the fault of the comics micro format – what is here is action-packed, well paced and leaves you on another great cliffhanger that will leave you drooling for the next fortnight's issue.

An enjoyable build up to what promises to be a hell of a showdown, but with 6 issues still to go, what else can go wrong for Pax and his team? Autocracy issue 6 is out now and comes recommended, even if its just to enjoy the artwork of the Vamparc weaponry.