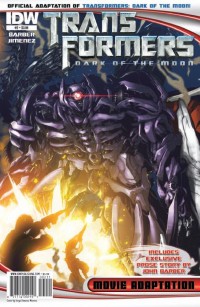 Greetings Seibertronians. Following our recent review of Transformers Dark of the Moon #1, The Official Comic Adaptation, we bring you the review of the second book in the four book series. As always, we’d like to warn you of any potential (and by potential I mean blatant) spoilers in the review and suggest that you skip this review til after the film has hit the silver screen if you’d like to stay “in the Dark” about the film.

Transformers Dark of the Moon #2, The Official Comic Adaptation.


As with the first book, the crew at the helm of creating this adaptation is lead by Writer John Barber, with artwork being done by Jorge Jimenez Moreno, colors by Romulo Fajardo, letters by Shawn Lee, and editing done by Carlos Guzman and Andy Schmidt.

Book two picks up shortly after where book one leads off with on Sam Witwicky starting his first day at his new job. He’s quickly met by a covertesque employee who yanks him into the nearest restroom and insists he take the information he possesed that concerned the “aliens” he was in contact with years prior. Sam denies everything in good fashion but the info is forced on him and the employee books out of the restroom sans pants (as that’s where he was hiding the info) as their boss emerges from a cammode. Sam gives chase to the kid who then states he didn’t know him nor has ever spoke to him and is promptly toasted by Laserbeak. Laserbeak then pursues Sam who, well runs, and finds an emergency axe and returns the favor to Laserbeak by bludgeoning him/her/it in the head. Cue the reunion of Sam and the N.E.S.T. team.

Sam meets the crew and a not impressed Director Mearing, and fills them in on the happenings as Optimus Prime uses the power of the Matrix of Leadership to revive Sentinel Prime. Sentinel blasts Optimus in a defensive move and Optimus and the crew get him to realize who they are and where they are. Optimus and the crew bow to Sentinel in respect and Optimus asks him to reassume command of the Autobots, offering him the Matrix of Leadership. Sentinel refuses, stating that he was in no condition nor had the ability to lead them anymore. Optimus fills him in on the Moon situation and that five unknown pillars were found. He then tells everyone the purpose of the pillars: as Space Bridge, and that only he can operate it.

Flash over to Africa where Megatron is holding base. Soundwave reports that Megatrons “dreads” have left the moon on the Autobot ship. Megatron orders Soundwave to tell the dreads to pursue a “secondary objective” and gather the troops.

Back in the US, Sam is with Bumblebee trying to figure out why the Decepticons are killing humans. Sam walks into a room where former Agent Simmons, of the now defuct Sector 7, is on TV discussing his latest book on aliens. Presumably Sam gets in contact with Simmons cause the next panel features his boss coming to his apartment to give him the information he dropped earlier and the boss threatens to sue Sam if he doesn’t get to see the Bots. Then you see the boss, Simmons and some other guy in a Sector 7 jumpsuit although its not explained how or when they got there. Simmons fills them in on why the Cons are interested in the moon. In walks Carly in a sultry dress, mad that Sam forgot about a party they were supposed to go to and mad that he’s with the Autobots stating that Mearing said she’d handle it. She promptly rips the foot off of Sam’s lucky bunny and gives it to him, leaving Sam.

Atlantic City is their next destination as Simmons tracks down a cosmonaut that worked on the space program and is promptly met by a cadre of guns as he inquires about it. In steps Wheelie, whos been tagging along the way, speaking Russian and making the cosmonaut like him. The cosmonaut tells them that they found hundreds of pillars on the moon. Sam realizes that if they only found five, that means the Decepticons took the rest and plan on using Sentinel Prime to activate it. He quickly calls Mearing to warn them when she says to stay out of it. As they are driving towards the N.E.S.T. teams base, they’re met by a Decepticon that resembles Ravage. Bumblebee backtracks and Sam tells Sideswipe to protect Sentinel. The Autobots form a defensive around Sentinel Prime and Ironhide uses his body to stop a Decepticon vehicle from catching Sentinel. Sam tells Ironhide to guard him cause he’s the key. At this Sentinel Prime transforms, says “Yes, Ironhide, I am the key” and blasts him in the face. To be continued.

As for this as a comic, I give it two cubes out of four this time. The art, once again, was severely lacking and the human art seemed more rushed this time than the first. The Bots look kind of sloppy at times and the colors just don't seem to give the book any life. The story was even hard to swallow this go around as it jumped major leaps without given details on how that leapt was taken. Given this is an adaptation that you have a bunch of story to put into a small amount of space, it gets the job done for giving you the end goods. As I stated before, if you love the movieverse and gotta have more cowbell, the $3.99 pricetag is an easy pill to swallow to complete the series.

As with the first book, the second book featured another solid prose story by John Barber. This go around features Agent Simmons dad in a Soviet prison during the space race. We get alot of background info on how the Russians got the jump in the race and find out that the Pretenders have been manipulating humans from the start. Soundwave appears at the end and starts to connect the dots between the first film and now.

Much better prose story this time around that really gave life to the first one. Barber did a great job of giving background details on Dark of the Moon while letting us know how the Allspark, the Sun Harvestor and the Space Bridge all have a commonplace.

Review three will be headed your way shortly so stay tuned Seibertronians.

Yep, the sexism continues through the whole trilogy. Also, the story is a mess.