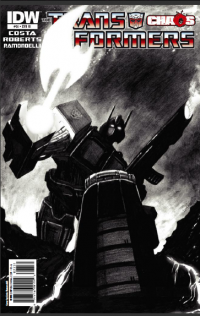 With a pair of great comics preceding Transformers: Ongoing #24, it's fair to say that this issue had it's fair share of expectations. Not only that, but the comic was the start of IDW's well-advertised arc, Chaos. The previous issues featured flashbacks and art by Alex Milne. Ongoing #24 deviates from that state, with the artwork being the biggest change many will notice. Livio Ramondelli takes the helm for Ongoing #24, as well as three future issues, #26, #28 and #30. While this review is meant to focus on #24, I feel that it's a good time to look at Ramondelli's art. Many have been rather critical on the change of artwork, as this is a drastic change from what we've seen in the previous 23 issues. However, I feel that the naysayers are a bit overcritical. Ramondelli's covers for Best Of Megatron and Best of Optimus Prime are top class. This is his first Transformers issue. There's also the concept that we're finally back at Cybertron. What better way to set a tone than to use Ramondelli's art, which I think conveys the oppressed feelings and melancholy the Autobots would have if Galvatron were in control of their home planet.

Chaos. We're in it. How did we get here? The matrix was given back to Optimus Prime on Prime, who immediately set course for Cybertron. He explained to his troops that Galvatron was still alive and has been amassing an army on Cybertron. Cut to #24. Galvatron and his brethren show up on one of the Autobot's most important facilities, Kimia. By the time the Autobots show up, it's no longer under their control.... the consequences of the capture will be known once you read the issue.

They're scared. Who you might ask? The Autobots. It's been a very long time since the Autobots have been outnumbered. In fact, in the entire Ongoing session, there really hasn't been a massive army versus a massive army. That's seemingly going to change.

What's rather odd about the Autobots first arrival on their birthplace is the selection of Transformers accompanying Optimus Prime. Or to me, maybe it's just one. Yes, Ironhide and Sideswipe were the last Autobots to be on Cybertron. But Drift? I know he's the IDW posterboy, and perhaps it's so that we won't forget that Drift exists, but I think there were much better candidates on the Autobot ship.

It's hard to be highly critical of Transformers #24. Yes, Chaos does look promising, but this issue isn't much of a standalone piece, but more of a setup for hopefully greater things to come.