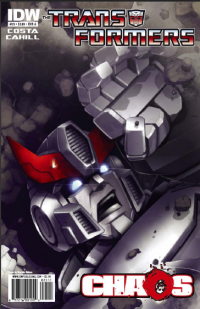 I feel that switching back to Earth is futile. Especially when issues #23, #24 and #25 have been building up the intensity for a battle to end all battles on Cybertron. On Earth, it just isn't as exciting. Yes, there's Bumblebee, Jazz, Ultra Magnus, Prowl and some obscure Autobots, but the enemies are the same. The same one's that have been giving the Autobots trouble since #1. Humans that don't like Transformers on their home planet, and straggler Decepticons who aren't organized and aren't much of a threat to the safety of the Autobots. Sure, they could possibly harm innocent civilians, but as fans we're attaching our emotions to Autobots, not random innocent civilians. Of course this is my mere assumption that the stakes aren't going to change, that the Autobots are simply doing clean up duty on Earth and their really isn't that much of a threat from anyone or anybot. I could be wrong... ..but what's right is the selection of Brendan Cahill as the artist for this issue, as well as the upcoming "The Last Story on Earth" issues 27 and 29. Cahill's art is promising and clean. While it may not be as flashy as Milne's art, it fits the mood, much like Ramondelli's art in the last issue. You'll be familiar with the writing, as Costa re-takes the reigns for this final sequence on Earth.

While the Transformers Ongoing series looks to finally transgress into it's final breath on Earth, many aspects remain the same. Spike's on his own terms, and the Autobots can't begin to fully trust him. The Autobots believe that they always have situations under control in their own terms, but it never seems to be the case.

In an issue that has a plot that should be trying to wrap things up, we essentially have more problems. But I guess that's why this is Part 1 of 3. It's an issue that's leading up to hopefully greater things to come. My suggestion, if you're a fan of any of the Autobots featured, then pick this one up, if not, then just leave it to the eventual Chaos trade paper back.