Seibertron.com talks to Hasbro and Activision about War For Cybertron

Greetings Seibertron. Counterpunch here bringing word down from the mountain.

The Staff here at Seibertron.com was privileged to participate in a conference call with Aaron Archer of Hasbro and Activision regarding the upcoming War for Cybertron game that you may have seen in our recent news cycles.

We were given free reign to ask questions and pry for information on your behalf and over the course of the interview found out some interesting and intriguing information. The conversation was free-flow and just presenting the questions as they were flatly asked would not really give you the same information that this article presentation will. A lot of what was said, wasn't said and knowing what was repeated or had emphasis placed upon it is just as important as the straight answer to the question. I will do my best to provide summary of the important topics and then I will simply bullet-point any other information that did not fit easily elsewhere.

The Backstory
This is a project that has been in development since 2007. Hasbro indicated to us, that the idea is to create a more linear story and that the game as a story-telling device is a "jumping off point". Specifically, they stated that the events of the game will live longer/carry-on past the life of the game itself. The basis of the story is the Cybertron Civil War. From our conversation and our inference at what was said, it appears that they are finally telling that part (the pre-Earth, Civil War) of the Transformers mythos the way they want it to be told. The word "canon" was used several times as we discussed this and when asked if this game/story was creating a canonical back-story for G1 ... we were not told "no". Of course, over the years, it has seemed that Hasbro has been careful to never truly define certain things, the origin of Prime, origin of the Constructicons, etc. The feeling that I and others had was that the plan was to tell a Cybertronian Civil War back story ... and if it so happens to make perfect sense as the canon G1 Civil War story ... well, that's how it is. Repeatedly, we were told that the effort is to tell great stories. Specifically, we were told that "Canon is a good word ... " I'm not sure there's a G1 fan out there who wouldn't consider the Transformer's Civil War Story to be the kind of great story they've been waiting on for years.

So, what else? What other specifics can we give? The story will be set on Cybertron. The Civil War will be hot and volatile. This will be the story of the Autobots and Decepticons before they left for Earth, before they really even know of other races. The setting and visualizations of Cybertron will be new and different. The one resounding piece of information seemed to be that this game will have a significant impact on the life and direction of the franchise over the next few years. 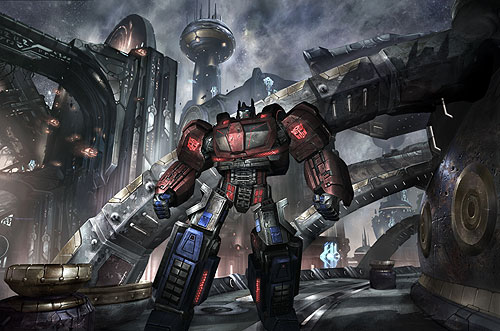 (Click on the above image to view a 3000 pixel version)

The Game
The game itself is scheduled for a 2010 release date. Judging from the time it takes other games to hit the market, my personal opinion is that we'll see it sometime in late Fall or Winter of 2010. It seems to me that a summer release would be ambitious. We were told that the game platform provides for a very sizable audience for this story. The use of games as story platforms has taken off in recent years and seems to be in line with Hasbro's expansion of the brand ideal. The focus on gameplay discussion centered around the intensity of the combat and situation on Cybertron. This was described to us as a "Gamer's Game". The presentation of the in-game story is set to have dark overtones with large scale impact. Specific information on the game such as the number of playable characters or names of individual characters was not available for release yet. Along side this information becoming public, Activision plans on releasing a significant amount of assets (rendered pictures) and press info on Wednesday. At this point, we were told that on-line multi-player aspects of the game are key and are recognized as important play elements.

Other Information of Interest
* When asked if this game/story was meant to be the filler between now and Transformers 3, the answer was a fairly strong, "no". The movie universe was described as its own separate entity, which of course we all realize. The point seemed to be, that this storytelling event via the game and the things that are to come after it are not just distractions to hold us over until the next film, but are instead the firm foundations of the next few years of the franchise.

* Hasbro is co-developing the story alongside Activision. Creative control seems to be something that they are paying close attention to. Statements such as "We're really looking to leverage what's happened before" and "This era in Transformers is full of opportunity" show that the development teams on both sides are really looking into the things that long time fans have been after in regards to the story elements. We were told that "Anything that's taken place on Cybertron has been mostly in comics" and that they were eager to explore this new venue.

* The story and the game are not movie based.

* Character identity appears to be a recognized issue. If you've seen the pictures for Optimus Prime in the game, you will automatically recognize him. For core characters, the design teams are taking visual cues from those characters across the continuum of Transformers History. After all, most of the G1 gang did not have the most flattering Cybertronian modes when you think back on it.

* When asked if any of the design work borrowed from Transtech (because elements of the new Prime model do reference it ...) we were flatly told that Transtech hasn't been discussed in the office in 10 years (we know that's an exaggeration, but the point remains the same). I could hear the dreams of some of you shattering right there and then.

* Hasbro paid some genuine complements to High Moon in regards to the character designs.

* An emphasis on bringing some very obscure characters into focus for this story was highlighted to us. While no one was specifically named, we were told that they were referring to characters that hardcore, long-time fans would be interested in seeing.

Thanks for reading. I will be around to take questions on any of this, to clear it up, or to speculate along side you. I'm sure Seibertron, First Gen, and Mkall will also be happy to add their input into the discussion.

Thanks go out to Hasbro as well as Activision for making this possible and for reaching out to the community. It is greatly appreciated.

Also, I'd like to give a special thanks to Activision and Hasbro for this opportunity. This was a great collaboration.
Re: Seibertron.com talks to Hasbro and Activision about War For Cybertron (1029167)
Posted by Mindmaster on December 18th, 2009 @ 2:25pm CST
Dude, I was just getting syched about the toy thing, but that uncolored truck thing, I was sure fire it is going to be Prime

Re: Seibertron.com talks to Hasbro and Activision about War For Cybertron (1029169)
Posted by hippymule on December 18th, 2009 @ 2:48pm CST
I didn't see anybody post this(that doesn't mean they didn't) but that tf toy that we couldn't identifey is optimus prime(cybertron form)! how cool is that! well go ahead spam me about how u guys already knew and stuff.

hippymule wrote:I didn't see anybody post this(that doesn't mean they didn't) but that tf toy that we couldn't identifey is optimus prime(cybertron form)! how cool is that! well go ahead spam me about how u guys already knew and stuff.

And I really hope it can hold it's own in single player.
Re: Seibertron.com talks to Hasbro and Activision about War For Cybertron (1029192)
Posted by Fires_Of_Inferno on December 18th, 2009 @ 4:59pm CST
"An emphasis on bringing some very obscure characters into focus for this story was highlighted to us. While no one was specifically named, we were told that they were referring to characters that hardcore, long-time fans would be interested in seeing."

Hm, a few names come to mind with this. Straxus, Jihaxus, Scrounge, Devcon, Rook, Rack N' Ruin, Impactor, Xarron, Liege Maximo, Death's Head, Centurion. Of course I only really know a small fraction of the comic-verse so there could be alot more that I don't know that don't come up often. Still, those guys mentioned would be pretty sweet.
Re: Seibertron.com talks to Hasbro and Activision about War For Cybertron (1029251)
Posted by Lastjustice on December 18th, 2009 @ 10:24pm CST
Here's some more info i saw out there.

I keep seeing people mention it will be a FPS, but if it's using the Unreal engine surely it will be an over the shoulder, full on shooter a la Gears of War and Halo.
Re: Seibertron.com talks to Hasbro and Activision about War For Cybertron (1029369)
Posted by Cyberstrike on December 19th, 2009 @ 10:26am CST
I find FPS games incredibly boring and repetitive. If you played one you pretty much played them all. Call me old fashioned but I actually like to see the character I'm playing in a video game other than hands and a weapon.
Click here to view additional comments about this topic at the Energon Pub Forums ...