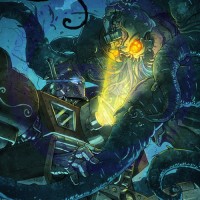 Is Infestation 2: Transformers issue 1 a horror from the deep or just a horror? Steering clear of making direct references to HP Lovecraft's work apart from to drop his name in the adverts, this book is unashamedly influenced by it and, as a cross-over concept, works better than the Vampire/Zombie hybrid theme from the first series. Set in the period created by the sub-series Hearts of Steel its almost as if Chuck Dixon created HoS specifically with this book in mind so seamless is the transition. The story is atmospheric and Guido Guidi's character redesigns are (with one very notable yellow exception) as good as you would expect for the period, rivets, steam exhaust ports, propellers and all. (Although there is one image of Trailbreakerblazer that will be burned into your mind for a very long time, but that's a entirely different style of horror.) I wonder who that could be..?

Set deep into the steampunk-era, those of you familiar with HP Lovecraft, (and those of you who aren't, get yourselves to a bookstore immediately) will know the art behind his writing was in making the humans the ultimate victims in his stories, unable to resist the flowing tide of horror that engulfs them from the deep... and this has transposed well. Revisiting the life of the now married Tobias & Kitty Muldoon, and making a new famous friend in the form of Nikola Tesla on the way, Tobias is visited by Bumblebee who's concise plot-exposition cues up a week-long trip north on the Trailblazer, Hound, Ratchet and Wheeljack express to visit a sleeping friend where Tesla's historically famous inventing skills are set to be pivotal.

I know! Guard carriage at the front? What were they thinking...

The stronger side of this story however is the unseen antagonist. Guidi's inhuman aquatic thralls of the nightmarish Elder Gods from beyond the stars fuel this Cthulhu-inspired tale as they spread the word of their masters power to all they encounter as they rise from the depths, enslaving human and robot alike, culminating in a scene with returning fishermen confronted by the horror of the creatures evil on the docks, helpless and unable to comprehend the demons before them, before darkness of the sea finally consumes them...

The Ancient Ones are no longer dreaming. Now they are hungry

Their masters keeping to the shadows, the creatures overall mystique is spoiled slightly by the overly simplistic sci-fi explanation given by Bumblebee, however a 2-comic span of a story doesn't allow much room for suspense so, from a Transformers perspective, it sadly fails to really deliver. The Autobots are notable as always, if somewhat lacking in individual personalities, but as a by-product of the Decepticons allegiance change there is little action from them apart from one memorable instance that Ironhide wont forget in a hurry, although a great piece of dialogue from Bonecrusher appears to have been glossed over, hopefully to be realised in part 2. The overall standard of this comic is up there with IDW's other non-transformers titles and I can see this theme working better in amongst their wide-ranging GI Joe and D&D line or their fledgling TMNT series.

As there is only two comics to this sub-arc, I wouldn't expect much to surprise you in the second half of this story, trying to put too much suspense into too little space, however as a wider piece of this latest Infestation picture it has real potential and, from this snippet of a 12 issue arc, if horror comics or the Lovecraft-mythos are your thing I would suggest seeking out the first and last issues at the very least.

Overall, limited appeal for Transformers fans, those into the period, particular fans of HoS and/or Lovecraft will appreciate a lot about the book, but those with a love of the more mundane Transformers series are most likely to be disappointed.