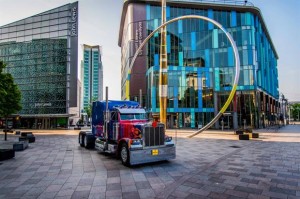 Here's a random piece of news for an afternoon (in this part of the world, anyway): Event Magazine UK reports that company Sense has created an interactive Transformers experience, and it is currently touring the UK alongside the Optimus Prime live-action truck from Revenge of the Fallen/Dark of the Moon. Check out more info below!

Visitors will be able to play with the latest toys, including new remote control models, put the latest Transformers apps and video games through their paces, and watch episodes from the hit TV series Transformer: Robots in Disguise.

Optimus Prime and Bumblebee will be there to welcome fans on board a specially designed trailer, which will feature an interactive wall where characters can be ‘powered up’.

There will also be the ultimate photo opportunity with the chance to pose inside a replica of the Optimus Prime truck cab.

The tour has already hit the Sunderland Airshow and rolls out to Carfest North in Cheshire (29-31 July), Cardiff city centre (5-7 August), Bristol Balloon Fiesta (11-14 August), The Bullring in Birmingham (18-21 August) and The Big Festival in Oxfordshire (26-28 August).

It will also visit Kidtropolis at London ExCel from 25-27 October.

Nick Swift, account director at real world marketing agency Sense, which is running the campaign said: "With lifelong Transformers fans in the agency, it was a real delight to get stuck in to creating a touring brand experience for this amazing and evergreen entertainment franchise."

Comment below to let us know what you think.

DeadCaL wrote:Oooh, it'll be in Birmingham at the same time as TF Nation.