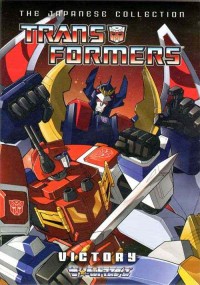 TVshowsonDVD.com is reporting that Shout! Factory will be releasing the final set in their Japanese exclusive series, Transformers: Victory, on August 28th! The four disc set has a SRP of $29.93 and includes English subtitles. The set is currently available for pre-order on Amazon for $20.95.

With its glorious return to the classic TRANSFORMERS, VICTORY - the third and final installment of the Japanese-exclusive series - introduces four new factions to the TRANSFORMERS universe. Each group comes equipped with its own unique power and the ability to combine to form much larger, more powerful Transformers, immediately making each and every battle even more epic! Now, for the first time in North America, you can enjoy 37 action-packed episodes of VICTORY on DVD in its original Japanese language with brand-new English subtitles!

korisifu wrote:Please excuse my ignorance but is this it's own stand alone series or a continuation? I've watched the first episode on YouTube and it seemed to be all new bots. I grew up on G1, discovered Headmasters last summer, and now have Masterforce on its way to me, is this still part of G1 or all new?

Though, also like the first two, it too wasn't spared from the ethnocentric subtitles of Shout!/Hasbro. Really? Blacker is not Gripper. Holi is not Stakeout.

And, again, they got the logo for The Headmasters placed at the bottom of the Victory DVD cover just like they did for Masterforce.

Forgotten wrote:Much better show than Headmasters or Masterforce in my opinion.

Pardon me, but it what ways is Victory *better* than Masterforce? The majority of Victory was a Saturday morning cartoon-styled series with standalone episodic plots that barely linked together, a leader who overshadowed his teammates due to the show trying to force down our throats just how awesome he was (when he was really just a bland, cardboard cut-out of a leader), pitiful Destrons who were either comic relief or generic soldiers who could barely hold their own in battle without Deszaras having to come in and save them (at least, until Liokaiser finally shows up, who literally saves this show from being less than great, and is possibly the best Destron/Decepticon combiner character ever

, but I digress), a distinct lack of any and all unique insert songs for battle scenes that led to them having to use the theme song in EVERY episode to the point where it got so repetitive it lost nearly all its luster and lyrical intrigue, and a plot that came in way too late to save any reason for us having to sit through so much filler material before it finally got going.

As awesome as Liokaiser, Victory Leo, Victory Saber, and the plot involving the space fortress were, they were overshadowed by the slow-paced mundane feel of this show that keeps it as being tied with series like G1 and Armada as being "just average".

With Masterforce, however, we got a near-coherent plot from start to finish, engaging characters who almost all got great focus/development/screentime, plenty of insert songs to keep things unique and spiced up in select battle scenes, a leader who literally started from the ground up and rose to excellence on his own as the series progressed (he didn't even want to be leader at first), deliciously villainous Destrons who came in many flavors of evil (some of whom were even able to reform by the series' conclusion) and were great characters in their own right, competent and extremely useful human characters that other series could only dream of having (though, TF: Prime Jack is about at the level of these guys, but he's the only one of that series), and just the right amount of filler to get us familiar with the characters so that the story itself could be going at full speed with characters ready for it.

It's biggest flaw, however, is that it doesn't explain a whole lot of things, leaving some ends loose and untouched upon. But, they did create a special episode at the end of the series to explain some of these concepts, so it did at least attempt to rectify this. Nonetheless, Masterforce was above and beyond average, and has reached the point of being my third favorite TF series.

Bouncy X wrote:so now that they will all be available individually, does this mean the box set will no longer be a shout store exclusive and be available at retail and/or amazon shortly after?

LiKwid wrote:This makes me happy.. I've been wanting to see this series ever since headmasters.. Just another part of transformers I've never seen before..

It's definitely worth getting. My only gripe is that you can sometime miss whats going on for trying to read the substitles and vise versa.
Re: Shout! Factory to Release Transformers: Victory 4 DVD Set on August 28th (1384544)
Posted by Sabrblade on May 28th, 2012 @ 11:13am CDT

LiKwid wrote:This makes me happy.. I've been wanting to see this series ever since headmasters.. Just another part of transformers I've never seen before..

It's definitely worth getting. My only gripe is that you can sometime miss whats going on for trying to read the substitles and vise versa.

See, I've gotten so accustom to subtitles that I don't have this problem. Whenever there's dialogue, there tend to be minimal action going on on the screen, while the action scenes have hardly any dialogue to read aside from some yelling. It's like the action pauses whenever someone speaks, and the speaking is toned down when lots of activity occurs.