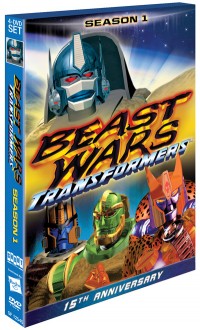 USA Weekend recently caught up with Shout! Factory's Brian Ward to discuss their Beast Wars DVD releases. Here are a few excerpts from the interview to read it in it's entirety click here.

I talked with Shout’s DVD producer Brian Ward about Beast Wars, which he worked on in addition to the upcoming releases of ‘80s faves M.A.S.K. and Jem. “I have the job of being the ‘niche guy’ at the company,” he says. “Once they figured that the Gen-X crowd was the ones spending the money and I amply proved myself geeky enough to appreciate all that stuff, they immediately assigned me all of it.”

Did you find that there was a lot of interest in it at the Transformers convention BotCon earlier this month?

Beast Wars was all the rage. You had fans who would come up to us saying, “This is the show that I grew up on. G1 was OK, I like it, it’s fine, but Beast Wars is the one I’m interested in.” I can’t deny them that this show is incredibly well-written. It’s incredibly smart. I didn’t grow up on it at all. In fact, I was a bit creeped out by the idea of a computer-generated Transofrmers show. When I started watching as I started producing the set, I feel in love with it very quickly. It took me three, maybe four episodes to get past the computer animation and to get into the fact that I was going to be growing with characters a lot. The genius of the writing of the show really came in the fact that unlike G1, you didn’t have 101 characters and toys to try to push. There wasn’t a new character introduced every episode. In this case, you had six or seven characters on either side, which gave you a lot more chances to establish those characters, dive into them a little bit more, learn a little bit more and really it helps. When certain things happen throughout the course of the series, you’re emotionally invested.

As a G1 fan watching it for the first time, were there any Beast Wars characters that appealed to you as you were watching them?

They were smart – they did a number of things that weren’t traditional to Saturday-morning cartoons. Everyone likes Dinobot, and for those who don’t know, Dinobot was a Predacon, a bad guy, who in the first episode decided he wanted to challenge Megatron for the leadership and got booted out. He then decided he wanted to become a good guy, a Maximal, and even challenged Optimus for leadership. You don’t find characters like that in most traditional cartoons. You have black hats, and you’ve got white hats. This was a character I liken to Spike in Buffy the Vampire Slayer: He’s a character who basically wants to kill things just because that’s what he likes to do. Even if that means going and killing his old team, he’ll do it because that’s what he wants to do. I thought he was a pretty deep character, and certainly by the end of the series you don’t want anything bad to happen to him.