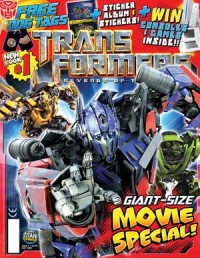 With the official UK release date of Transformers: Revenge of the Fallen now looming, Titan have unveiled the first issue of its all-new Transformers: Revenge of the Fallen comic (issue #1 on sale today, June 18th). Re-starting from issue #1 the premiere issue comes with a fresh new look and an all-new (UK exclusive) comic strip, which ties into the movie and spotlights the Twins, Skids and Mudflap (along with a whole host of other new characters, including Soundwave, Ransack, Ravage, Sideways, Grindor, Sideswipe and more). The strip is written by me with art by Jon Davis-Hunt, who’s undertaking ongoing art duties on the title! And as if that wasn’t enough, there’s more comic strip (in the shape of All Hail Megatron), free dog tags, free sticker album (and stickers), character profiles and competitions." Check out Simon Furman's blog for yourself here.