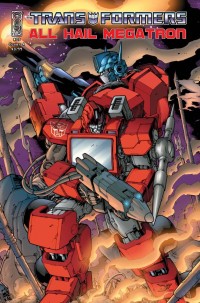 Long time Transformers comic scribe Simon Furman has updated his blog with an update regarding All Hail Megatron #13, which is due out in store this Wednesday the 22nd of July (Thursday the 23rd for those outside the USA Mainland).

The update can be considered spoiler free for those who know Furman's tendency to spill the beans in his summaries, but he does reveal the two main characters in his story (so beware if you are unaware of who they are.)

Can’t tell you too much about the story itself, but rest assured that as well as providing something of a retrospective on the intertwined life and times of Prime and Ironhide it sets the scene for more momentous twists and turns to come.

And for those attending the San Diego Comic Con this weekend, don't forget to hunt Furman down for an autograph.

Darth Bombshell wrote:If nothing else, it's gonna be fun watching other people clean up Shane McCarthy's mess.

Yes indeed, and I rather have no one else clean it up; Furman will bring this continuity back on an adult track. What hurts about Shane McCarthy's mess is that alot (including myself) kept purchasing issues due to lack of any other fresh Generation One-esque stories. I still occassionaly read Dreamwave's Ongoing G1 story because it was extremely well-done... and that was 50% Furman. We missed you Simon, we really missed you.