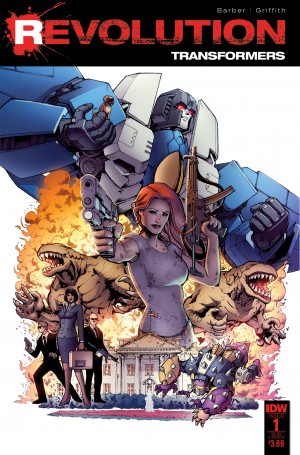 Courtesy, as is customary by now, of iTunes, we have a three page preview of the upcoming Transformers one-shot that directly ties in with the IDW Revolution crossover event! You can check out the pages belowm and head back in a couple weeks for more.

THUNDERCRACKER AND BUSTER SAVE THE WORLD! A DECEPTICON who wants to be a screenwriter. A dog who wants to, I don’t know, eat stuff and chase squirrels or whatever dogs want to do. A White House under siege by DIRE WRAITHS. And the phone call that brings them all together.

Also, HOORAY for the return of our favorite part-time screenwriter!
Re: Sneak Peek - IDW Transformers: Revolution One-Shot iTunes Preview (1834699)
Posted by Kurona on October 19th, 2016 @ 10:13am CDT
Finally, back to the good characters! Been meaning to see how Thundercracker's been dealing with the whole being an autobot thing. And Soundwave allying with them. And Revolution in general.

And it's nice to see Faireborn too! I was getting a bit sick of GI Joe in Revolution. Faireborn's at least fun. Not my favourite, but I like her.


AND they're fighting against dire wraiths? Suppose Revolution can be redeemed yet. Partly. In some parts.
Re: Sneak Peek - IDW Transformers: Revolution One-Shot iTunes Preview (1834740)
Posted by Va'al on October 19th, 2016 @ 12:18pm CDT
Robots in (Micro) Spaaaaaaace
(Spoiler free-ish)

Synopsis
THEY CAME FROM MICROSPACE! What terror reaches through the tendrils of entropy into our universe—and why does ROM want to kill it? Meanwhile, M.A.S.K.’s MATT TRAKKER makes a startling discovery about the TRANSFORMERS—but will G.I. JOE’s SCARLETT believe him?

..does it really matter?

Is this review a week late? Yes, yes it is, my apologies. I'm sure that whoever was wanting to read the third issue in the core story of Revolution has done so already - if you're a fan of any of the other franchises involved, make sure to check Tigertrack's guide to who this book might appeal to here - but nonetheless, we have a series to follow, a rep to maintain, and finally a spare afternoon to catch up!

And, admittedly, there's not that much more that can be said as we hectically stumble across the midpoint in the story, really. There was some brief discussion at Seibertron HQ, and the points raised are essentially the same as for the previous two issues: a lot of new material, a lot of old material reused, not enough space, time, or any other dimension to allow it to fit properly.

If, on one side, the Micronauts are finally close to finding out the much larger world out there - i.e. here - the fact that they are now part of that wider universe also waters down the charm that the title had kept while operating more or less on its own. They have yet to properly interact with the rest of the IDWverse, but I'm dreading what might happen at this point.

The biggest sore note in Barber and Bunn's script, I'm sorry to say, is still GI Joe - and in particular, Scarlett. They have been proven incompetent, non-existing, pointless, replaceable, and the result? They're all angry, or sassy, or mouthy, or angry caricatures of the already tropey ensemble that they risk to be given the nature of their original characterisation.

Much like the previous two issues, Fico Ossio's art has some wildly swinging reactions, in terms of consistency, in terms of clarity, in terms of getting the newly developed designs (which I still like!) to shine on the page instead of just making them flashier and bolder. Again, it's a shame, because the style can really work if taken at a slower pace and more neutral layouts.

Similarly on the colours: Sebastian Cheng does some excellent work with lighting, and shades of different colours according to light sources, environments, characters and adding some sheen and chrome where it really can work - but I can't help but feel that sometimes it's just a little too vibrant, tripping into flashy for flash's sake.

Best example of *everything* or what?

I also still have nothing else to add to the stellar work - that follows suit from the previous two comments - that Tom B. Long does on the lettering, not only following the visual narrative, but helping out with character and voice establishing too. And as for the covers, there are at least 8 variants (the thumbnailed one by Brandon Easton), and they're all worth a look, for sure! Make sure to check them out where you can.

As I said above, I have very little to add to previous comments that staff have made about the book, in the previous two reviews. If anything, we now have virtually all players on board for the ride, so it can only move forwards from here - with the final two issues, somehow. A lot of story, a lot of characters, a lot of patience to keep up with something that is not as engaging as it really wants to and deserves to be.

I am actually going to say, though, that one of our comics readers on staff made an extremely good comment on the boards, and I'll use it to close off this review. Kurona, take it away:

it feels like some sort of labour of love; some well-intentioned fans of these series who wanted to do something awesome and bring them all together in some ultimate universe of great team-ups and diversity and all around fun. But then they had no clue how to do it and hastily ended up writing something really generic and disappointing.

This is what it feels like to me. Like someone had a really great idea and was really excited to do it but fell short at executing it. I can't say I feel rage at the guys behind this; just... a lot of pity, honestly.

Transformers: Revolution #1
John Barber (w) • Andrew Griffith (a) • Marcelo Matere (c)
THUNDERCRACKER AND BUSTER SAVE THE WORLD! A DECEPTICON who wants to be a screenwriter. A dog who wants to, I don’t know, eat stuff and chase squirrels or whatever dogs want to do. A White House under siege by DIRE WRAITHS. And the phone call that brings them all together.
FC • 32 pages • $3.99

Re: Sneak Peek - IDW Transformers: Revolution One-Shot iTunes Preview (1835565)
Posted by Va'al on October 22nd, 2016 @ 4:30am CDT
In other IDW Publishing news, and still in the Revolution event, we follow Windblade to Earth as she joins the other Cybertronians already present, and as the link between Titans, Primes and Microspace is explored in all its tiny but giant ramifications. Check out the iTunes screenshots below!

WINDBLADE ON EARTH! The mysterious link between METROTITAN and MICROSPACE threatens to tear two universes apart, and only WINDBLADE has a chance to heal the Titan… and there she learns a terrifying secret that changes the stakes of the REVOLUTION.

Shuttershock wrote:I see Thundercracker has been catching up on his Seinfeld recently. Excellent!

I answer the phone the same way when it's obvious who it is & they're (predictably) frantic about "nothing." The reactions are hilarious, but people rarely get the reference.
Re: Sneak Peek - IDW Transformers: Revolution One-Shot iTunes Preview (1835645)
Posted by Kurona on October 22nd, 2016 @ 12:22pm CDT
And so the rest of the preview continues to prove the Thundercracker one-shot is going to be the best thing about this event. Trust him to do so :')

ricemazter wrote:Wait, if the human government is aware that dire wraiths exist doesn't that put ROM out of a job?

It didn't when they found out in the Marvel book. They still have no idea how to tell who's a Dire Wraith and who's not.
Re: Sneak Peek - IDW Transformers: Revolution One-Shot iTunes Preview (1835713)
Posted by Kurona on October 22nd, 2016 @ 3:57pm CDT
And, uh. Earth is one planet. Apparently they're spread out through the entire universe.
Re: Sneak Peek - IDW Transformers: Revolution One-Shot iTunes Preview (1835816)
Posted by D-Maximal_Primal on October 23rd, 2016 @ 12:58am CDT
iTunes has provided us with a new preview, this time for Revolution #4! This sneak peak picks off right where #3 ended, and in a special way. With the silent Snake Eyes taking center stage, the whole 3 page preview is done in the "silent" form with only the art speaking for itself, and no speech bubbles to be found. It is unclear if the whole issue will follow this suit. Check out the full preview below.

SILENT INTERLUDE! One human has the skill to break into AUTOBOT CITY—but what is SNAKE EYES going to do when he finds himself face-to-knee with OPTIMUS PRIME? And outside, MILES MAYHEM and the M.A.S.K. team wait to see who walks out alive…

Transformers: good read and a nice send off to the title. Thundercracker remains a great character that I enjoy, and his little animal team was adorable. Wonder where Sunstreaker is though? But combining has made them friends, which is fun for me. the whole Dire Wraith thing felt like it came out of nowhere, but apparently Revolution #4 is supposed to help with that. the fact that so many were in the White House was an issue was well. Plus, that one dude totally had his fingers ripped off, metal. Storytelling did feel a bit rushed and there were lots of jokes, but overall I liked it.

Action Man: I thoroughly liked it. The Iron Giant made the whole comic for me honestly. Plus, we're finally getting around to the point that people are liking Transformers, realizing they are living things, and that Mayhem is slime. Plus, Action man + Kup + Mayday = revolutionaries set up. Spike and Talon felt completely useless in the story though, like they were obligated to be there but there was no effort to make them mean anything. they were just annoying and grumbling.

Both good, both somewhere between a 3 and a 4 out of 5 for me.
Click here to view additional comments about this topic at the Energon Pub Forums ...