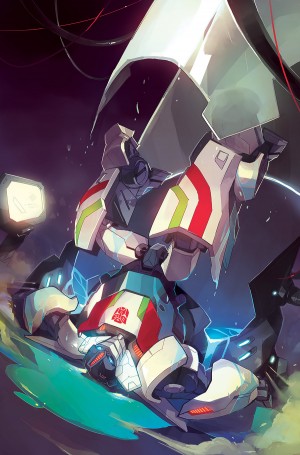 IDW's digital assistant Mariel Romero is once again feeding the fandom by uploading to iTunes a three-page preview of the upcoming Transformers: Robots in Disguise issue 33, in which we return to Cybertron, Wheeljack and to Sarah Stone's art. Check it out mirrored below, including clean art from Stone's blog!

WHEELJACK REBORN! After months unconscious, WHEELJACK awakens to find a strange, new CYBERTRON! STARSCREAM rules—OPTIMUS PRIME has made peace with MEGATRON—and WINDBLADE controls the city. What’s a scientist to do… but uncover the greatest mystery in TRANSFORMERS history?

ZeroWolf wrote:Looking good, loving the fact that Sarah stone is back on art. How long is this detour back to Cybertron?

This particular one, just the one issue. But #34 is going to look at Galvatron the Barbarian again, so we're technically back on Cybertron for another while.

Re: Sneak Peek - IDW Transformers: Robots in Disguise #33, Plus Clean Art from Sarah Stone (1605952)
Posted by Flashwave on September 12th, 2014 @ 1:36pm CDT
Okay, so left sie: Looks like Trailbreaker. Head's wrong, but the shoulder is right, the chest might be, and ytou can put that gun over his shoulder. A Diaclone guy?

Wheeljack: Reminds me of his Prime fig. That makes me happy.

Not a fan of Ms. Stone's art. It's fun and whimsy for a series, but if she's on the main series, I want to see her style with a little more straight edge to the drawing. But that's just me. Not Primacy blocky, but it's too much for me like what everyone else complaied obout in Animated. *Shrugs* And actually, Wheeljack has about the right thickness, so draw 'em all like that, please?

And the hell is up with everyone's faces? Chromia's expression, I dunno, did someone break the servos in her cheeks? It's not Disgust, It's not hatred, it's ust "scrunched". Windblade looks like someone just wedgied her,
Re: Sneak Peek - IDW Transformers: Robots in Disguise #33, Plus Clean Art from Sarah Stone (1605953)
Posted by Va'al on September 12th, 2014 @ 1:46pm CDT

Flashwave wrote:Okay, so left sie: Looks like Trailbreaker. Head's wrong, but the shoulder is right, the chest might be, and ytou can put that gun over his shoulder. A Diaclone guy?
,

That would be Decepticon medic Flatline, introduced by Barber and Griffith.
Re: Sneak Peek - IDW Transformers: Robots in Disguise #33, Plus Clean Art from Sarah Stone (1605960)
Posted by ZeroWolf on September 12th, 2014 @ 2:13pm CDT
I see thanks Va'al

I do enjoy seeing the golden age of Cybertron...and the times before that

EDIT: Also, I think Chromia is still unhappy with the fallout from the Windblade miniseries.
Re: Sneak Peek - IDW Transformers: Robots in Disguise #33, Plus Clean Art from Sarah Stone (1607620)
Posted by Va'al on September 19th, 2014 @ 10:58pm CDT
Sarah Stone strikes again, as IDW reveals the next 30th Anniversary cover, a retailer incentive variant for Transformers: Robots in Disguise #33! And this time round, it's one of the good guys, doing good - check out Ironfist/Fisitron below.

30th Anniverssary Cover (3 of 3)! The previous two I did are here and here. This ended up being a very emotional part of Last Stand of the Wreckers for me, so here’s my tribute. Thank you again, IDW, for allowing me to participate in TF’s 30th birthday.

Transformers: Robots in Disguise #33: Dawn of the Autobots
John Barber (w) • Sarah Stone (a)
WHEELJACK REBORN! After months unconscious, WHEELJACK awakens to find a strange, new CYBERTRON! STARSCREAM rules—OPTIMUS PRIME has made peace with MEGATRON—and WINDBLADE controls the city. What’s a scientist to do… but uncover the greatest mystery in TRANSFORMERS history?
FC • 32 pages • $3.99

Bullet points:
The fate of the Aerialbots revealed!

Synopsis
WHEELJACK REBORN! After months unconscious, WHEELJACK awakens to find a strange, new CYBERTRON! STARSCREAM rules—OPTIMUS PRIME has made peace with MEGATRON—and WINDBLADE controls the city. What’s a scientist to do… but uncover the greatest mystery in TRANSFORMERS history?

In the previous issue, Earth was exposed, Galvatron revealed, Prowl came clean and many many shots were fired, as Thundercracker continues his screenplay. But.. in the previous issue, Starscream retakes control of Cybertron, Chromia comes clean, and Windblade agrees to maintain the status quo just a little longer. Robots in Disguise #33 picks up a lot more from where Windblade ended than #32, and Wheeljack is finally back.

And it is with Wheeljack that we rediscover Metroplex, Iacon and Cybertron, touching base with players from earlier stories and plots, re-establishing some of the relationships between the current Cybertronian rulers, personalities and gatekeepers. And we get an interesting look at Starscream from a John Barber perspective, as well as a quite sweet moment of reconnection with Ironhide.

And you know what? Barber's writing in this issue is a very different tone from previous RID stories - there's a light-heartedness, an empathy and a running streak of humour and positivity, even in the aftermath and stage of what is actually the plotline bubbling beneath the surface, that brought several smiles during every reading of the issue.

After the revelations of #32 and the machinations of Prowl, whose influence is very much still felt on Cybertron, after the horrifying and shocking happenings of MTMTE's latest arc, not only was this issue welcome, it slipped in quite comfortably in the overarching story, cleverly playing a very very long game.

If there is a style that could really suit the tone that Barber took for Wheeljack's view on the world, it is Sarah Stone's. We've seen her big scale multi-panel, multi-page spreads, and those come in very handy with recaps. But we've come to know her work also for the sheer expressivity of teh characters, in body language and facial reactions. Even with faceplates.

And if the tone of the writing can't do the job, then it's down to hues of colour and background work to spruce it up a bit. Stone's rendition of the new Cybertron, something that is constantly pointed at throughout the story, definitely plays with the gritty, grim reality of a war-torn planet which is both relieved and a little at a loss as to what to do with itself.

The lettering, in very subtle touches, works very well with the lighter feel of the issue asa whole ,and Tom B. Long does a commendable job of highlighting what is needed without being intrusive or distracting at all. As for the covers, we have seen the Casey Coller and JP Bove convention exclusive, and spotted the Coller and Priscilla Tramontano variant in the solicits. Andrew Griffith and Josh Perez take over a brilliant Lazarus pit main cover, and Stone offers a gorgeous 30th Anniversary Fisitron treat (thumbnail). Gotta catch 'em all?

Some readers might be put off by the return of the running caption monologues device, even though it is from the perspective of one of the brightest, and nicest, minds of Cybertron. And there is virtually no action to claim that name - except for party-action - as we follow Wheeljack's refresher journey through the last six months (in-universe) and current, Starscream-led, Cybertron.

With him in charge? Yeah

So what does this issue do, then? It does start building a stage for Combiner Wars. It does recap on where we are in the Transformerverse, Earth briefly included, and reaching quite far back. Both of which are big things, yes, but some might complain it's not really that much. But it does it so well, so light-heartedly, and freshly, in both style and art, that it's enough to provide a breath of air between two heavy story arcs for the two series.

#RIPSlingshot2014 spread the word
Re: Sneak Peek - IDW Transformers: Robots in Disguise #33, Plus Clean Art from Sarah Stone (1608518)
Posted by Shuttershock on September 24th, 2014 @ 2:57pm CDT
I'm curious if Slingshot is dead or just critically injured and won't be able to serve as a limb. I've no particular attachment to him, it just seems more likely he's badly injured, since it's so hard to kill these guys. Wheeljack said he could see his spark, though he might have been talking about a vacant spark chamber. Either way, I can get used to the idea of AB and Powerglide as new volunteers for Superion.

also also that powerglide is also the other bot screamer brought it with alpha bravo so there is that -i can't wait to see what happens when we have combiners on all sides squaring off -im hoping monstructor will get a toy but i don't know if they survived or not
Re: Sneak Peek - IDW Transformers: Robots in Disguise #33, Plus Clean Art from Sarah Stone (1608965)
Posted by Shuttershock on September 26th, 2014 @ 11:35am CDT

I think Starscream's rundown implies that Monstructor managed to slink off in the chaos, plus he name drops the Stunticons and how Swindle made them into an imperfect combiner once.
Re: Sneak Peek - IDW Transformers: Robots in Disguise #33, Plus Clean Art from Sarah Stone (1609542)
Posted by chaosmage42 on September 29th, 2014 @ 12:42pm CDT
and you can bet money that they will be back -since the stunticons are getting a toy it and the protectobots and the combaticons -im just hoping monstructor gets one since he is an underused combiner -i didn't even know who he was it i looked him up after idw put him in that one comic. A lot of transformers don't get new figures for every 100th bumblebee mold there are a million missfires and treadshots that don't -the club does make a few of those -which is something i wish they would do more of instead of making even more new characters to add to the mix why not go through all the unused characters and use them instead -sure you will need to put some big names in but fill the other toys with people who don't get much attention
Click here to view additional comments about this topic at the Energon Pub Forums ...