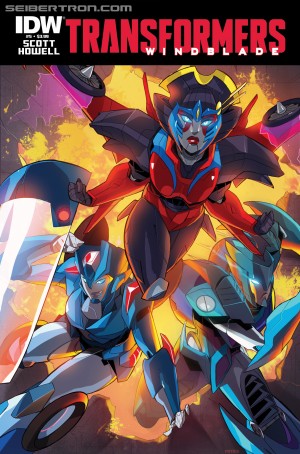 Another week, another comics preview from IDW Publishing via the work of Mariel Romero on iTunes - and adding to Combiner Hunters, we head into more Mairghread Scott writing and back to Velocitron by taking a peek at what's to come in Transformers: Windblade #5. Check out the three pages below!

RACE AGAINST THE LIGHT! On VELOCITRON, racing isn’t a sport—it’s a matter of life and death! WINDBLADE and BLURR put the pedal to the metal to save CYBERTRON—and their own lives.

Re: Sneak Peek - IDW Transformers: Windblade #5 iTunes Preview (1712863)
Posted by Va'al on July 24th, 2015 @ 1:41pm CDT
And the third and final IDW Publishing offering, once again after Newsarama, sees the planet Velocitron screaming into the foreground, as Windblade and the Cybertronian -er- delegates attempt to find out what it really means to race for your life. Full preview below, and full review on Wednesday right here on Seibertron.com!

Transformers: Windblade #5
Mairghread Scott (w) • Corin Howell (a) • Priscilla Tramontano (c)
RACE AGAINST THE LIGHT! On VELOCITRON, racing isn’t a sport—it’s a matter of life and death! WINDBLADE and BLURR put the pedal to the metal to save CYBERTRON—and their own lives.
FC • 32 pages • $3.99

ZeroWolf wrote:I love the relationship that's being set with ironhide and chromia.

No kidding, this seems like a Twilight Zone or some strange Star Trek mission where they land on a completely alien world. I like it though!
Re: Sneak Peek - IDW Transformers: Windblade #5 iTunes Preview (1713016)
Posted by SW's SilverHammer on July 24th, 2015 @ 10:06pm CDT

padfoo wrote:I don't like the scale/style and character portrayal for Ironhide. He is too puny(literally) and weak, he was knocked out by Chromia during the Windblade series. This just seems like a very different character from previous IDW series.

padfoo wrote:I don't like the scale/style and character portrayal for Ironhide. He is too puny(literally) and weak, he was knocked out by Chromia during the Windblade series. This just seems like a very different character from previous IDW series.

Well too be fair, It's been established so far that Ironhide is kind off an oldman.

Additionally, Chromia is pretty established as a badass and it makes sense that Ironhide respects her so much because he's also a badass. In this arc he feels different because he's sort of out of place with all these sleek, fast speedsters. But it makes complete sense to have him in a tale that involves finding the other races made of Primus' children.

Velocitron Nights: The Ballad of Ricky Blurry
Race Against The Light, Which Is Totally Not A Title From MTMTE, We Promise

Remember back about a decade ago, when you first watched Transformers: Cybertron on TV? The first few episodes start with a bang, taking you away on a fast-paced adventure spanning three planets within the span of just the first four episodes. One of these planets was Velocitron, where the heroic Autobots Hot Shot and Red Alert assisted planet natives Override and Clocker in a bid to win races and secure a Cyber Planet Key, thus keeping it out of the clutches of the evil Megatron. To get it, they had to win a race, I think. Unfortunately, the race went on for longer than a Suzuka 8-hour and no one in the fandom remembers the details because why on earth would anyone watch that arc over again? The point here is that most Transformers fans are reminded of one word when thinking about Velocitron: Slow.

This is relevant today because IDW's fifth and latest issue of Windblade Volume 2, written by Mairghread Scott featuring art by Corin Howell and colors by Thomas Deer, brings us back to Velocitron. While doing so, it manages to do a lot of things, but "going slow" isn't one of them.

The pacing really is the stand-out characteristic here, and in fact, events happen so quickly that one has to wonder if the series ending at issue 7 was the original plan. While no one wants a repeat of Cybertron's fourteen episode circular boredom, I can't help but feel like this one takes a well developed premise with a lot of potential and steers off the exit ramp towards the next part of the story a little too quickly.

The art keeps with the implied tone of the narrative, lending a cartoon like quality to the scenes. This works well for most of the scenes, given the sometimes very convenient ways in which our heroes will overcome their external conflicts as the pages progress. Plot aside, the lines for some of the residents of this Velocitron are handled pretty appropriately, and Override in particular (not Nitro Convoy, take that Takara) feels suited to the style.

Deer's colors work very well, helping to lend contrast between locales and offering Velocitron a familiar yet altogether different feel. This isn't Cybertron, and at no point does it really feel that way.

Potential Full On Blatant Spoilers Ahead, Maybe
By the end of the read I certainly wasn't unsatisfied, but I also don't feel like I got the full taste of Velocitron, or perhaps the issue is that it was just a taste. If the sin of Cybertron's old Velocitron arc was being too slow, then this does the opposite and manages to go too fast, at least that's how I can best describe my malaise. Or perhaps, this is a crepe and what I really wanted was something else. They are the really thin pancakes. It's just a French word for them.

The great build to such a simple resolution almost made me forget what happened in between. To use an old theatre adage, "Show, don't Tell". This issue told me a lot about the planet and characters and city, but fell short on showing them to me. An abstract map of the city is cool, but ultimately kind of pointless if only some bits and pieces are shown. Telling me that Override is only tenuously in charge and implying that she's eccentric when given requests is great stuff, but when the chance comes to show it, it isn't taken. The politics of the planet have been played up as rather complicated for a couple issues now, but when you get to the ending they end up being really quite simple with Ransack just sort of doing, well, nothing. The end result is a story that felt complex, but then ultimately just isn't.

That's not to say there weren't parts I liked. Including the aforementioned Override and Ransack, along with Clocker (questionable color scheme aside, but at least it was a toy deco so I'll give it a slide) was a really fun touch. I absolutely adored Cybertron when it came out, and seeing some of these characters get further adventures is quite fun. There's nothing more frightening then driving with a live goddamn cougar next to you.

Our normal reviewer and News Admin Extraordinaire, Va'al, did point out some good stuff to me as well that I mostly agree with, so here are his words (mostly


Va'al wrote:I really liked the scenes with the Titan, both in writing (how Windblade feels about the whole thing, and how she connects with it) and the art, colours in particular. The race was quite good, and just the right length to not become overblown or dragged out. Ironhide and Chromia were also great, though Ironhide in general has and continues to be a stand out. I'm too drunk to taste this chicken.

My kudos to him for the help with this review as he juggled helping me out of my criticisms, all whilst writing up reviews for the other two IDW Transformers releases this week.

So with all that said, if you ain't first, you're last, so this gets the following score:

Not sure it comes out that way reading my words here another couple days later.


and a side note, I dont really dig the condescending attitude of the Camiens. And why do they keep making me not like Chromia? I liked her in the one-shot. Dont like her here.
Re: Sneak Peek - IDW Transformers: Windblade #5 iTunes Preview (1714343)
Posted by DeadCaL on July 29th, 2015 @ 2:17pm CDT

Optimizzy wrote:you know, my biggest gripe is the cartoony city that's bigger on the inside. I just don't think the artist is skilled enough to really convey the idea of moving cities. They should be huge. Honestly, I hope she improves or they replace her. Its not terrible, its just not ... quality

Optimizzy wrote:you know, my biggest gripe is the cartoony city that's bigger on the inside. I just don't think the artist is skilled enough to really convey the idea of moving cities. They should be huge. Honestly, I hope she improves or they replace her. Its not terrible, its just not ... quality

Ha ha. But really the city should have been huge.

Re: Sneak Peek - IDW Transformers: Windblade #5 iTunes Preview (1714388)
Posted by Tigertrack on July 29th, 2015 @ 5:44pm CDT
Nice connections to the past in Cybertron cartoon eps, which I have a very hard time remembering a whole lot about.

I didn't hate it, and enjoyed it mostly, I'm just not superbly and overly impressed by what's going on in the TF comic verse lately.

Blurr, Blurr, Blurr!!! A resolution that so far was not a surprise. Art could be criticized, but is workable enough. We can't all be Stone, Coller, Milne, Or Guidi. It's not Heart of Darkness bad, everything looks better when compared with that.
Click here to view additional comments about this topic at the Energon Pub Forums ...