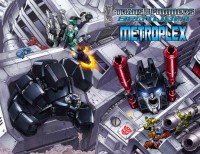 With Spotlight Metroplex due for release next week, on Wednesday the 1st of July, Comics Continuum have posted a five page (technically three page) preview to tide us over the next 6 days.

Included in the preview are both covers, the wrap around and the standard.

To check out the full preview, please click here, and make sure to head down to your local comic store on the 1st of July to nab your copy.

Chaoslock wrote:Wow, that was actually old-school IDW, just what I missed.

Better than that, it was straight up G1 old-school. Goldbug in Bumblebees G1 Alt mode, the "Soundwave" alt. style roadway lamps. That was just too cool. All the fun of the cartoon but with better graphics and no crappy acting. I loved seeing the Cybertronian alt modes of the other Throttlebots. I like 'em better than the Earth modes. I'm going to have to get this one.
Re: Spotlight Metroplex 5 page preview (943294)
Posted by Devastron on June 26th, 2009 @ 9:37pm CDT
Hopefully it picks up after these first few pages. I was never a fan of the Throttlebots and being able to go 'oh neat, Soundwave lampposts!' has been done before in IDW comics.
Re: Spotlight Metroplex 5 page preview (943310)
Posted by T-Macksimus on June 26th, 2009 @ 10:10pm CDT
Well, thank you so very much for singularly pissing on someone elses enthusiasm like you did.
Ever freaking occur to you that someone else may not have seen that particular item pop up before or
were you just actively trolling around for someone to drop your derisive comment on for no good reason?
If you aren't interested in the comic...fine. Say so and move on but there was no call for you to be such an ass
towards me with no provocation and in such a public display. I would have PM'ed you or a mod but since you obviously
aren't hiding your opinion NEITHER AM I!!

Re: Spotlight Metroplex 5 page preview (944055)
Posted by MYoung23 on June 28th, 2009 @ 10:23am CDT
Has it been established when this Spotlight takes place? We know it takes place after Revelation but if it happens before AHM wouldnt the Autobots have need a city sized Autobot while they were getting their tails kicked across the galaxy.
Re: Spotlight Metroplex 5 page preview (944279)
Posted by Jeysie on June 28th, 2009 @ 4:46pm CDT

bluecatcinema wrote:I wonder, are they gonna go with the old "Goldbug was once Bumblebee" thing, or they gonna make him a seperate character, like they did with Galvatron?

Devastron wrote:Hopefully it picks up after these first few pages. I was never a fan of the Throttlebots and being able to go 'oh neat, Soundwave lampposts!' has been done before in IDW comics.

I consider both of those things a plus, personally. I enjoy seeing the lesser-known characters get some screen time, and I like little background nods to things as long as they don't take too much spotlight.

Heck, there's even signs that Schmidt might have remembered that Searchlight is Optimus' aide-de-camp in the IDWverse. On top of that, it's good to see Sixshot back in action, and I agree that it blissfully reads more like old-school IDW than the current AHM style. It's also nice to see that the issue being made up of the two-page spreads might prove to be an interesting aesthetic choice without sacrificing too much story.

So... you can be disappointed so far if you like. Me, I think it's nice to find myself thinking an upcoming IDW G1 issue might actually be fun after all the disappointment so far. (Well, the upcoming G1 miniseries that Nick Roche will be writing has also got me excited.)