Stellar Line Up Unveiled Ahead of RWS Transformers Cybertron Con 2012 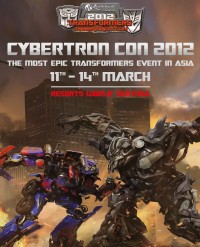 Singapore, 4 March 2012 - With less than a week remaining to the biggest TRANSFORMERS event to hit Southeast Asia, branded play company, Hasbro (Singapore), the organisers for the upcoming RESORTS WORLD SENTOSA SINGAPORE TRANSFORMERS CYBERTRON CON 2012 ('Cybertron Con'), has announced a series of special opportunities for TRANSFORMERS fans to look forward to.

Led by displays of TRANSFORMERS toys, collectibles, video games, and more, the Cybertron Con, held at the Resorts World Convention Centre, Compass Ballroom, from 11 to 14 March 2012, will also offer fans an inside look into the breadth of upcoming releases and products via a four-day spectacle of panel sessions with TRANSFORMERS brand stewards, designers and more. Fans can expect to learn the latest developments from the brand including details on the upcoming fall release of the 'Fall of Cybertron' video game, upcoming products from the TRANSFORMERS: Prime line.

Panel Sessions
Giving fans a peek behind the curtain and an inside look into what's coming in the future of TRANSFORMERS, the Cybertron Con line-up of panel sessions are as follows:

For a complete list and bios of the special guests at Cybertron Con, please visit www.cybertroncon.com.

Con Exclusives
As a treat to all convention attendees, Hasbro has also announced a myriad of 'Con Exclusives' which can be purchased at the Merchandising Zone. As an added bonus, Takara Tomy lead designer, Hideaki Yoke, will also be on hand to autograph the first 100 sets of Transformers Optimus Prime with Trailer Cybertron Con 2012 Special Edition Set sold. Enthusiasts and collectors are advised to arrive early on opening day (11 March 2012) for a chance to own one of the first 100 sets with Hideaki Yoke's autograph. Amongst the other exclusive offerings available during the Con include TRANSFORMERS themed luggage, apparel, battle masks, iPhone covers and more. For more information and updates, please join the Facebook page at www.facebook.com/transformerssingapore.com.

Interested convention attendees are advised to register quickly during the Con due to the limited vacancies.

TRANSFORMERS Re-Imagined
Unique to this year's Cybertron Con is a display of 50 specially customised Optimus Prime and Bumblebee model kits designed by 50 renowned local designers and hobbyists who have put their own spin and design into creating models unlike any the industry has even seen. Amongst the big names included in the display are film director Eric Khoo, fashion designer Daniel Boey, popular local musicians Jack & Rai, as well as acclaimed local illusionist and magician J C Sum. The display has been touted to being one of the 'must-visit' sections of the convention.

KRE-O Augmented Reality Interactive Zone
The latest Augmented Reality (AR) technology will bring the KRE-O TRANSFORMERS to life - and meet the public. Attendees need only to stand in front of a big screen and they will see themselves captured 'live' by a video camera - just like on the big screen at a stadium, et cetera. Stepping into the interactive zone, the KRE-O toy, Bumblebee, would appear, standing beside them. Taking it one step further, Bumblebee will then interact with them - as if they are actually in a 'parallel world.' Apart from 'dancing' with the audience, up on the screen, Bumblebee will even give participants a 'high five' before transforming into a sports car and driving away.

Retrospective Display
To showcase the history of the brand, Hasbro will present an extensive collection of historical TRANSFORMERS items from throughout the brand's 28 year history via a visually stunning exhibit. The exhibit will take fans through the chronological progression of the TRANSFORMERS brand, beginning with the classic 'Generation One' era. As fans proceed through, they will be able to view extensive artwork and information about characters and stories from different eras of the brand from 'Beast Wars' to the most recent entertainment blockbuster movie and the current 'TRANSFORMERS: Prime' series.

Other special events and exhibits will include:

Tickets for the convention are priced at $12 for day ticket and $68 for VIP 4-day package. To complete the TRANSFORMERS experience, a special 3D2N package - comprising hotel accommodation, a pair of tickets to 2012 Cybertron Con, Universal Studios Singapore, and the Maritime Experiential Museum and Aquarium (MEMA) - has also been rolled out. Day packages consisting tickets to these three attractions are also available at $77 (Adult), $62 (Child) and $48 (Senior Citizen).

Fans who wish to attend 2012 Cybertron Con are encouraged to reserve their packages and tickets fast through the Resorts World Sentosa website at http://www.rwsentosa.com, ticketing booths located at Universal Studios Singapore, RWS Ticketing and Membership Hub and MEMA, via reservation hotline +65 6577 8888, or through authorised travel agents now.

More information will be released closer to date. In the meantime, for more information and updates on 2012 Cybertron Con, please visit http://www.cybertroncon.com or join the Facebook page at www.facebook.com/transformerssingapore.

Thanks! I'm using an IPad 2 and according to the apple website the resolution is:
1024-by-768-pixel resolution at 132 pixels per inch (ppi).

Thanks! I'm using an IPad 2 and according to the apple website the resolution is:
1024-by-768-pixel resolution at 132 pixels per inch (ppi).

BATTOUSAI XD wrote:Thank you, I appreciate it!

Not a problem, BATTOUSAI XD. Thanks for being part of our community here on Seibertron.com!
Re: Stellar Line Up Unveiled Ahead of RWS Transformers Cybertron Con 2012 (1355030)
Posted by Seibertron on March 5th, 2012 @ 1:51am CST

As the minutes leading up to the biggest Transformers event to be held in Southeast Asia fade away, we have intercepted secret messages on what will be on sale exclusively during Cybertron Con.

All items can be found at the Merchandizing Zone at RWS' Compass Ballroom. By the way, we have seen images and blueprints of the ballroom, it is huge! (just a little smaller than our planet!).

We are so excited to share them with you and we hope you can in turn let your readers have a sneak peak at the merchandise. Do kindly point us to your page when you've posted it up! J

Here are the items below:

First 100 sets sold on Opening Day will receive an autograph by Mr. Hideaki Yoke, in person! Apparel (Exclusive) - S$39.90 each, available in black and white

Not all prices are available yet. For more information, please go to: www.cybertroncon.com, http://www.facebook.com/transformerssingapore, or view the latest press release about CybertronCon.

Re: Stellar Line Up Unveiled Ahead of RWS Transformers Cybertron Con 2012 (1355041)
Posted by Optimutt on March 5th, 2012 @ 4:36am CST
While I am quite excited to try and get 2 of the Convention Movie Primes, I think I'll hold off on the signed version, as Yoke will be there. It will be cheaper to try and get him to sign the toy at a later time during the convention.

The TF:Prime Megatron looks interesting enough to warrant a look-see. As do the tee-shirts. Expensive for those, though, but still... convention exclusive tee-shirts... it'll be like being at a Phish show again!

The luggage is brilliant. Bear with me. Some of the event-goers will likely be traveling from other countries - Thailand for me - and what better thing to do at a con than collecting loot? With this luggage, it's a way for unprepared buyers to stock up on loads and be prepared for the flights home. As to quality... well, we'll see. I doubt I'll get one, but still, I