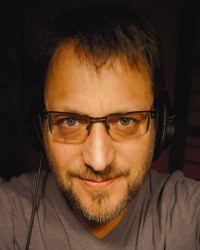 411Mania.com has posted an interview with Steve Blum, veteran Transformers voice actor and the currently the voice of both Transformers Prime's Starscream and Transformers: Rescue Bot's Heatwave. A few excerpts can be found below, click here to read the full interview.

The master of a million voices, Steven Blum, speaks with 411mania.com for a new, exclusive interview to talk about the new season of Transformers: Prime, Rescue Bots, his status as Wolverine, and much more!

The impeccably talented Steven Blum must be a wizard. What else could the performer behind such beloved characters as Spike Spiegel, Wolverine, Lord Starscream, Green Goblin, the Red Skull, and a host of others (Even the Taskmaster in Marvel vs. Capcom 3, seriously) be? You can now watch Blum on TV in the hit series, Transformers: Prime, now back for its second season where Blum portrays the fan favorite character and second-in-command of the Decepticons, Starscream. Also in the new Transformers series, Rescue Bots, Blum voices the character of Heatwave. Blum's history with the Transformers franchise actually goes back many years. In the US version of Car Robots, or Robots In Disguise, Blum voiced the Predacon Dark Scream and also Autobot Cerebros. Pre-Prime, Blum also voices Shockwave and Barricade in the videogame Transformers: War for Cybertron (along with the 1980's styled narrator of the story mode). Blum's near endless credits in anime, animated shows, movies, and videogames are almost too numerous to mention but in more recent years he's been the staple voice talent behind the legendary Marvel Comics character of Wolverine in numerous DTV movies, videogames, and animated shows including Wolverine And The X-Men, The Super Hero Squad Show, Hulk VS., The Avengers: Earth's Mightiest Heroes, and the new X-Men anime. Recently, 411mania.com got the chance to catch up with Steve for an exclusive interview:

Jeffrey Harris: What can you tell us about your character in Transformers: Rescue Bots, Heatwave?

Steven Blum: Well, he's brave, loyal, cranky, holds a lot of water, and gets to say cool things like… "Rescue Bots, Roll to the Rescue!" It's nice to play a heroic character without so much baggage. And a true joy to be able to bring the Transformers universe to a new generation in a family friendly, but hugely entertaining way.

Jeffrey Harris: When you got the role to play Starscream in Transformers: Prime, was there a certain way you wanted Starscream to sound or a specific vocal quality or characteristic for him to have?

Steven Blum: Like any character I approach, I start with the first voice that comes to me. I rely heavily on instinct, and through the years it's served me well. With Starscream, I knew the sound of the character's previous incarnations (i.e. Chris Latta, Tom Kenny, Charlie Adler, etc.), and wanted to give it my own take. The character design is different in Prime, hence the deeper snark and violence, but when I can, I pay a bit of vocal homage to my predecessors. Out of respect for them and for the fans. Fortunately, it seems to have worked out.