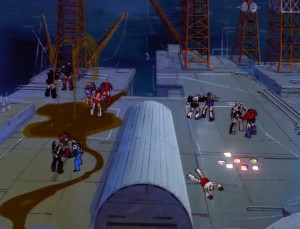 We finally have the final two parts of the recovered audio from the deleted scenes in the original Transformers animated series episode 'More Than Meets the Eye, part 1'. Courtesy of Transformers @ The Moon, the two clips embedded below see the Autobots and Decepticons engaging in battle on the oil rig, with some added stage directions from Wally Burr - check them out!

And Rumble on helium

NOTE: Shortly after the previous dialogue Megatron say the following lines.
MEGATRON: You fool, Starscream! Help save the Energon cubes! Get them out of here! Follow me!
NOTE: On the tape we own the line "Follow me!" is missing from this exchange.

NOTE: As Act 2 closes Megatron says the following line
MEGATRON: Who's the scrap metal now, Prime? You'll never stop me! (Laughs)
NOTE: On the tape this is then followed by the "Follow me!" cry that was missing earlier.
[ONTO ACT 3]

https://youtu.be/lA3KLnG4ndc
Re: Sunbow Transformers 'More Than Meets the Eye, Part 1' - Deleted Scenes Audio 4&5 (1838404)
Posted by Va'al on November 2nd, 2016 @ 5:48am CDT
We have some more material from the twins at Transformers @ the Moon, as they keep recovering audio from the tapes of the original generation 1 Sunbow animated series of The Transformers. This time, we look at (well, listen) to the episode Transport to Oblivion, and some extended and deleted audio in the embedded clip below - plus full transcript!

WALLY BURR: That's fine now everybody go over the base floor of this place and ...

MEGATRON: Ahh, soon I will have a shipment large enough to send to Cybertron.

Re: Sunbow Transformers 'More Than Meets the Eye, Part 1' - Deleted Scenes Audio 4&5 (1838448)
Posted by Sabrblade on November 2nd, 2016 @ 9:44am CDT
Looks like they took out the one remaining reference to the "getting ready to launch back to Cybertron in a new ship" subplot that was itself cut out from the end of MTMTE Part 3. Though, it does make sense to cut it out here since the rest of the episode never so much as mentions the launch ever again, let alone even mentions the fact that they can't just leave the Decepticons behind on Earth to do as they please with the planet. So it was probably for the better that the launch dialogue got removed.

Megatron's unmodulated voice makes him sound little like Jim Cummings.
Re: Sunbow Transformers 'More Than Meets the Eye, Part 1' - Deleted Scenes Audio 4&5 (1838491)
Posted by gothsaurus on November 2nd, 2016 @ 11:55am CDT
I wonder what exact settings and FX they used for each character's modulation. Hmmm. Wish someone could quiz the old Sunbow sound engineer.

Hearing this makes me wish someone would assemble the unused lines — plus a collection of clean (no music) / applicable lines from each actor's other endeavors like GI Joe (Latta), Hong Kong Phooey (Cruthers), Scooby Doo (Welker, Kasem) — and create a new storyline around them and a new G1 cartoon.

I know. Quite a pipe dream, but there are some crazy fans out there with more time on their hands than sense.

Sabrblade wrote:Looks like they took out the one remaining reference to the "getting ready to launch back to Cybertron in a new ship" subplot that was itself cut out from the end of MTMTE Part 3. Though, it does make sense to cut it out here since the rest of the episode never so much as mentions the launch ever again, let alone even mentions the fact that they can't just leave the Decepticons behind on Earth to do as they please with the planet. So it was probably for the better that the launch dialogue got removed.

Ultra Markus wrote:funny, Jim could of had some potential as voicing megatron

He sure has done some great villain voices over the years (SatAM Robotnik FTW!).

==== EXTENDED SCENE ====
STARSCREAM: Thundercracker, Soundwave, follow me!
*NEW* THUNDERCRACKER: Since when do you give the orders, Starscream?
*NEW* STARSCREAM: Since Megatron deserted us in our hour of need, Thundercracker. I am the new leader of the Decepticons.
POWER PLANT WORKER NO. 1: Those jets sound like they're gonna land in our laps.


==== EXTENDED SCENE ====
[Dan Gilvezan was not present for the recording so some dialogue is missing but this takes place after the securityi guard welcomes]
*NEW* CHIP: My pleasure ... say cheese!
*NEW* SPIKE: Cheese!
REFLECTOR: There. That was the last bit of info I needed.


==== EXTENDED SCENE ====
*NEW* STARSCREAM: Hurry! We've got to rendezvous with Megatron in less than a billon astro seconds.
STARSCREAM: I don't like the idea of Megatron getting the anti-matter formula! He can't be trusted!


==== EXTENDED SCENE ====
MEGATRON: Unlimited energy is almost mine!!
*NEW* MEGATRON: No. If they hear us coming they'll destroy the anti-matter formula
MEGATRON: This way we'll grab it before they know what hit them.


==== ADDITIONAL WORK ====
CHIP CHASE: I just hope this works.
*NEW* PROWL: Chip
PROWL: Why are you directing me to take this action?


==== EXTENDED SCENE ====
MEGATRON: Finally, I've located the anti-matter formula! Starscream, an outside computer now holds the formula we seek. I will transmit the coordinates. Get the formula -- bring it here immediately!
*NEW* THUNDERCRACKER: I wouldn't be surprised if it's the same computer that helped Prowl clobber us
*NEW* STARSCREAM: In that case pulverising it will be a pleasure!
[NOTE: The tape skips which may be why the lines were cut]
SOUNDWAVE: Ravage, eject. Operation: retrieval.

==== EXTENDED SCENE ====
RATCHET: You guys are in pathetic shape!
SUNSTREAKER: Oohh! That's a very sensitive junction!
*NEW* BRAWN: Quit complaining, Sunstreaker! It could be a lot worse! It could be me!
*NEW* VARIOUS: [groans]
CHIP CHASE: Ah, this is my fault!

==== EXTENDED SCENE ====
SUNSTREAKER: Hey, I get the feeling our jet judo needs a little more work!
SIDESWIPE:Oh? What makes you say that?
*NEW* WINCHARGER: I dare you to try that again!
*NEW* STARSCREAM: With pleasure! What's happening????
*NEW* WINCHARGER: I've just got a magnetic personality!
*NEW* SKYWARP: Ha! You won't catch me, Windcharger!
*NEW* PRIME: He doesn't need to!
MEGATRON: Thundercracker! The anti-matter! Quickly!


==== EXTENDED SCENE ====
SKYWARP:You little fool! You're no match for Skywarp!
CHIP CHASE: Spike!
*NEW* SKYWARP: You .. you microbe!
SKYWARP: For that I'll blast you first!

Re: Sunbow Transformers 'More Than Meets the Eye, Part 1' - Deleted Scenes Audio 4&5 (1839855)
Posted by D-Maximal_Primal on November 8th, 2016 @ 8:04pm CST
Transformers at the Moon have uploaded yet another Sunbow based video for us to enjoy, this time in the form of some original dialogue for the G1 episode "Divide and Conquer." So far, this is the episode with the least amount of cut dialogue. The dialogue includes parts from Optimus Prime's initial wounding, Laserbeak's attack, and the Autobots on Cybertron. You can find a whole Transcript of the episode HERE courtesy of Jim Sorenson and Chris McFeely.