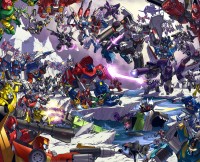 On the heels of Seibertron.com's story regarding member complaints of not receiving the TFCon 2009 Exclusive lithograph "Universe Divided" by Alex Milne, we get a response to our inquiry submitted a few days ago. Here's what TFCon had to say:

Was just alerted to the message stickied on the front page of your website. Very hurt and disappointed that a story like this would be posted without hearing from the other side of the story as
it makes it look like the people that work on TFcon are crooks trying to scam Transformers collectors out of a couple hundred dollars by not shipping some posters.

Some people did not receive posters so last month we reshipped to those that indicated to us that they did receive their shipment. Some people have now requested refunds which they have received. [Going] over the topic I saw mention of 2 people from Australia, if they were to check their paypal/credit cards statements they should see that they were
refunded. I see 1 email here from yesterday requesting a refund but if there are still people that have not received it we will certainly refund
them as soon as possible.

In attempting to contact the post office outlet that these were shipped from it no longer exists. It sounds convenient but it's also the truth. Regardless if any of your friends didn't receive a litho have them email this address and will make sure it's checked daily so refunds can be issued so this can be resolved.

The folks of TFCon are dedicated individuals who volunteer for the event and are Transformers fans just like you and I. It is this Seibertronians belief that no foul play was intended and the Transformers fans of TFCon will do everything in their power to correct this situation.

Seibertron.com: If it's happening, we're there.

Back in May of 2009, Seibertron.com reported that the Canadian Transformers Convention, TFCon, was offering non attendees a chance to own an exclusive art piece from the event. Universe Divided, done by artist Alex Milne, was a large poster done to commemerate the 25th Anniversary of the Transformers franchise. Recently, members of Seibertron.com have been coming foward to claim that the TFCon exclusive lithograph has not been delivered despite ordering the poster. A couple members have even stated that communication between the folks over at TFCon had stopped and email inquiries were not being responded to. Seibertron.com also submitted and official inquiry to these allegations but the email was not immediately answered.

Have you ordered the TFCon 2009 Lithograph and either recieved it or not? Please let us know by clicking Discuss this topic above and help your fellow Seibertronians resolve this dilemna.

Seibertron.com, keeping you in the know, right now.

Posted 1 day ago
News Categories: Toy News, Movie Related News, Cartoon News, Comic Book News, Site News, Rumors, Event News, Digital Media News, Collectables, Game News, Sponsor News, Site Articles, Store News, Company News, People News, Press Releases, Sightings, Reviews, Unlicensed Products News, Auctions, Transtopia, Interviews, Knock Offs, Collector's Club News, Editorials, Heavy Metal War, Podcast, Contests, Book News, Top Lists
Click here to post your comment about this news story!
Re: TFCon 2009 Alex Milne Universe Divided Litho- UPDATE TFCon Responds (1000419)
Posted by Zeds on September 20th, 2009 @ 4:24pm CDT
What have I learned from the comments posted on this thread? Innocent before proven guilty was not applied. Calm down and think twice before thinking the worst regarding a situation. The guys at TFCon are great. Been to all the shows and the last thing that they would do is take anyone for a ride. This thread is being put to rest with people getting refunds or the poster reshipped. I just felt that I should stand up for Colin and the gang for what they have done for the collecting community in Canada.
Re: TFCon 2009 Alex Milne Universe Divided Litho- UPDATE TFCon Responds (1000582)
Posted by [JRX] on September 20th, 2009 @ 11:03pm CDT

Blurrz wrote:Disregard what I said earlier. Didn't mean to start anything. Don't really want to talk about it, bad day and all.

I'm a "buy all the hot dogs" kinda guy (see 30 Rock for origin of reference).

Hope things are looking better!
Re: TFCon 2009 Alex Milne Universe Divided Litho- UPDATE TFCon Responds (1000756)
Posted by Razorclaw0000 on September 21st, 2009 @ 9:55am CDT
Well, in an even weirder twist, I was finally in contact to get the litho reshipped, made a second offer to spend more money on a trackable shipment, and then got a curt "We've decided to no longer ship anymore lithos, thanks." email.

I'm pretty disappointed now. All I really wanted was the lithograph. I suppose I understand that they just want the mess behind them, and I did get my money back (minus PayPal fees...grrrr) so I'm not really out anything, other than an awesome lithograph.

I wish this all could have been resolved more smoothly.

Re: TFCon 2009 Alex Milne Universe Divided Litho- UPDATE TFCon Responds (1000775)
Posted by Convotron on September 21st, 2009 @ 10:45am CDT
That's too bad, RC! At least you received a refund, though I'm sure there's little that can make up for your desire for the litho and the fruitless wait for it.

It's unfortunate but regardless of how small a percentage of people who had issues with their litho orders, this experience is something that'll possibly mar some people's perception of TFCon's future exclusive offerings.

The litho is very nice. I would have ordered one but I was out of the loop when it was originally offered.
Re: TFCon 2009 Alex Milne Universe Divided Litho- UPDATE TFCon Responds (1000779)
Posted by lightsyder on September 21st, 2009 @ 10:55am CDT
Well, just got the email about no more posters being shipped. I'm really disappointed here. after all of this time trying to get one and the rest of the stock is just going to sit somewhere? Doesn't make sense to me. I truly do not understand what went wrong here. These guys seem to have a pretty good track record from what I am seeing. I go the Alternators/Binaltech poster without any issues at all when it was offered. And this time posters go missing and emails are unanswered for weeks at a time. Kind of a shame it took a Transformers website reporting about it to get something to happen.

Re: TFCon 2009 Alex Milne Universe Divided Litho- UPDATE TFCon Responds (1000807)
Posted by Counterpunch on September 21st, 2009 @ 11:57am CDT
And the moral of the story is that parking in a Metro area is difficult and probably expensive. Help out with traffic congestion by taking public transit when ever it is available.

Also, answering email is a good way to maintain faith in your business practices.
Re: TFCon 2009 Alex Milne Universe Divided Litho- UPDATE TFCon Responds (1003165)
Posted by tftoyaddict on September 25th, 2009 @ 4:24am CDT
Well, I havent received any refunds... yet. Thank goodness to this forum for allowing this discussion at least it has produced results (an email response - yes it's aliiiiiivvvee

"You should have a refund in the next few days once funds are acquired into paypal.
Thanks." - tfcon@mountaincable.net

So hopefully for me this does not mean another waiting game....

People are stating this news is already resolved... but for people who have not gotten their refunds,ehm, sorry but Ive yet to consider the issue as resolved

So just a query to those refunded already

Did you guys have to send a "request money" from paypal or do they just automatically sent to you back the amount you paid them?

Im asking this coz I dont want to end up waiting endlessly when apparently it would be my fault in the end if they needed me to send a "request money".

TFcon to me Sept 21
You should have your refund in the next few days once funds are acquired
into paypal.
Thanks.

TFcon to me Oct 1
Will be coming through in the next 24 hours, just have to cross reference
with the old payment. Thanks.

me to TFcon Oct 3
I'm sorry to be a nag, but I am honestly beyond impatient. I gave you guys the benifit of the doubt, which caused me to miss the deadline for filing a dispute with PayPal.

Please issue a refund literally as soon as possible.

That's where it hangs. Your move, TFcon!