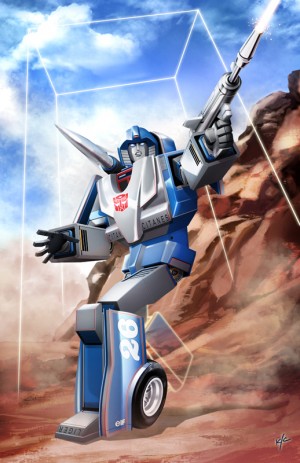 Concept artist for all things Transformers, from IDW, to Activision, to Hasbro, and Seibertron.com friend Ken Christiansen has been announced as the latest guest for TFCon Chicago! Check out below some more information, including a preview of one of the prints he'll have for sale.

TFcon is happy to welcome Ken Christiansen to TFcon Chicago 2014. His current Projects include contributions to the Transformers: the Covenant of Primus, IDW’s Transformers: Prime series, and toy development for Hasbro brands, including Transformers, Star Wars, and more. He will be in attendance all weekend and offering prints and commissions to the attendees.

absolutely
Re: TFcon Chicago Guest Announcement - Ken Christiansen (1613306)
Posted by Deadput on October 12th, 2014 @ 1:28am CDT
He also did the robot concept art for the ROTF and first movie games on the consoles (and Deadend for ROTF Psp)

I would love for him to make some more Movie style concept art because i loved his designs to pieces mostly his Combaticons and Stunticons.
Re: TFcon Chicago Guest Announcement - Ken Christiansen (1613332)
Posted by BumbleDouche on October 12th, 2014 @ 6:01am CDT
I'm positive I saw this exact Mirage in an episode of Transformers: Legends a week or two ago. Only difference there was that half of the body was a wire-frame type thing (like he was in the middle of his turning invisible gimmick). Seriously, the only reason I still have that game on my phone is to check out the new artwork every week, they should release a book collecting it all, some of it is amazing!

TFcon is happy to welcome IDW Publishing colorist Josh Perez to TFcon Chicago 2014. Transformers fans will recognize his work from the pages of Dark Cybertron, Robots in Disguise and More Than Meets The Eye. He will be in attendance all weekend and offering prints and commissions to the attendees.

He will be in attendance all weekend and offering prints and commissions to the attendees.

TFCon Chicago 2014 OFFICIAL PROMO
Optimus Prime gives another epic speech from the destroyed city of Chicago about Transformers 4: Age of Extinction... but is it all just a dream?
Re: TFcon Chicago Guest Announcement - Ken Christiansen (1614164)
Posted by Va'al on October 15th, 2014 @ 1:57pm CDT
In an official clip promoting TFCon Chicago 2014, shortly taking place and which Seibertron.com will be attending, fellow fan and podcaster jON3.0 takes on the mantle of Optimus Prime once more - check it out below!

TFCon Chicago 2014 OFFICIAL PROMO
Optimus Prime gives another epic speech from the destroyed city of Chicago about Transformers 4: Age of Extinction... but is it all just a dream?

Re: TFcon Chicago Guest Announcement - Ken Christiansen (1615387)
Posted by mooncake623 on October 20th, 2014 @ 3:05pm CDT
Our friends at TFcon just dropped by to release the Finalized Event Schedule for TFcon Chicago 2014. Keep your optics tuned to Seibertron.com for the latest in news and updates, plus the best galleries around!

Re: TFcon Chicago Guest Announcement - Ken Christiansen (1615438)
Posted by Hip-Hoptimus Rime on October 20th, 2014 @ 7:58pm CDT
Barricade will still be there, right? Any particular times? The TFCon site does not say. My first con, can't wait!
Re: TFcon Chicago Guest Announcement - Ken Christiansen (1616162)
Posted by Va'al on October 23rd, 2014 @ 7:24am CDT
A very brief update from TFCon Chicago, concerning superstar IDW Transformers artist Alex Milne. Unfortunately, Milne has had to cancel his attendance at the event due to personal reasons, as can be seen in the mirrored tweets below. The show will still be running according to its schedule, though, and make sure to pop by the Seibertron.com store while you're there as well!

tweet
Re: TFcon Chicago Guest Announcement - Ken Christiansen (1616179)
Posted by Lockdownhunter on October 23rd, 2014 @ 8:32am CDT
That is sad. Nevermind you are awesome

.
Re: TFcon Chicago Guest Announcement - Ken Christiansen (1616405)
Posted by LOST Cybertronian on October 23rd, 2014 @ 10:56pm CDT
The Hyatt Regency O'Hare recently sent out some hotel information to help those attending TFCon Chicago. This covers getting to the hotel from the airport, parking, hotel dining options and wi-fi access.


We look forward to welcoming you to the Hyatt Regency O'Hare!

If you are arriving from O'Hare International Airport: Hyatt Regency O'Hare has a complimentary 24-hour shuttle service between the hotel and the airport.

DOMESTIC ARRIVALS: Upon arriving, proceed to the baggage claim area. From there, there will be signs and red arrows directing you to the SHUTTLE BUS CENTER. Our shuttle picks up from door #1. For further instructions, click here.

INTERNATIONAL ARRIVALS: Upon arriving, call the hotel at (847) 696-1234 to inform the operator that you have arrived at the international terminal. A shuttle will be dispatched to the terminal to pick you up.

Parking at the Hyatt Regency O'Hare: Head east from River Road down Bryn Mawr. The hotel will be on your left. Should you require luggage assistance, enter the front drive of the hotel. If not, proceed to the end of Bryn Mawr, the entrance to the surface parking and hotel parking garage will be at the end of the block on your left. Please hold onto your guest room key to exit the parking gates upon your departure.

Dining Options within the hotel:

Perks is your one-stop-shop to get Starbucks coffee, freshly baked treats, an assortment of snacks, souvenirs and so much more! Perks is open daily from 4AM until 2AM during your stay.

﻿Red Bar is open nightly at 4PM during your stay. In addition to our delectable made-to-order sushi and amazing appetizers including burgers and pizza. Wash everything down with a rich and refreshing pint of our own Red Bar Brew while watching a game on one of our 25 plasma screens. Red Bar Brew is brewed locally by Two Brothers Brewing Co. in Warrenville, IL.

In Room Dining is also available from 6AM until 12AM.

We'd like to introduce you to our newest service enhancement as we strive to be your preferred hotel of choice in Chicago. During your stay , you can connect with your next meal from anywhere at any time. We invite you to order room service remotely with your favorite wireless or mobile device by logging on to http//ohare.hyattservices.com/ or by scanning the QR code below.

Getting Online at Hyatt Regency O'Hare

COMPLIMENTARY STANDARD WIFI is available in the hotel lobby by logging on to the Hyatt Public network.

WIFI is in all of the guestrooms. Logon to the Hyatt Guestroom network. To sign in, enter your last name and room number and accept the charge for Standard Internet.

EDIT: Never mind, of course it's on the website -- http://www.tfcon.com/parking
Click here to view additional comments about this topic at the Energon Pub Forums ...