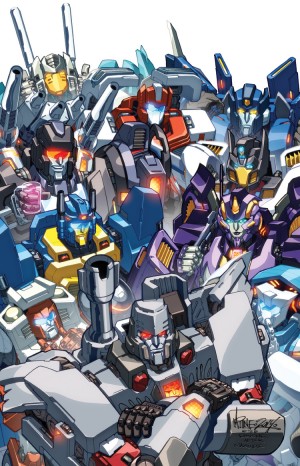 Another Alex Milne piece of news, this time from his Canadian homeland and via TFCon Toronto - who just added the IDW Transformers artist to their guest roster, joining previously announced James Raiz, James Roberts and many more. Head here to register for the July event, and find out more information below!

TFcon is very pleased to welcome back Alex Milne to the TFcon Toronto guest list this year.

Alex is the primary artist for IDW’s fan favorite Transformers: More than Meets the Eye comic book. He will be attending both days and offering prints and commissions to attendees all weekend long.

TFCon wrote:Check out our officially licensed ‪TFcon 2015 T-shirt that will be available in both Toronto and Charlotte this year. Preorders are already online. If you have already registered for the convention, you can easily add this to your existing order via our on-line registration system.

Re: TFcon Toronto 2015 Guest Update - Alex Milne (1697314)
Posted by mooncake623 on June 11th, 2015 @ 2:18pm CDT
TFcon just announced that Michael McConnohie will be a guest at this years convention in Toronto. Transformer fans might recongize him as the voice of both Tracks and Cosmos in the Generations 1 cartoon! A less known fact is that he was also the director and write for the 2001 TV series Robots in Disguise. He will be appearing all weekend meeting with attendees.

TFcon Toronto will be held from July 17th to 19th, 2015 at the Hilton Mississauga/Meadowvale on 6750 Mississauga Road, Mississauga, Ontario.

Keep your optics tuned to Seibertron.com for the latest in news and updates!
Re: TFcon Toronto 2015 Guest Update - Alex Milne (1705442)
Posted by Va'al on July 2nd, 2015 @ 9:23am CDT
The latest update for TFCon, the Toronto Transformers fan convention, and the world's largest yet, features a tentative list of events for the weekend of July 17-19! Check out below what the event has in store for those attending, and be mindful that some of these timings may change before the con itself.

Added Richard Newman (aka Rhinox/Tankor/Vector Prime) to the guest list.

Re: TFcon Toronto 2015 Guest Update - Alex Milne (1707073)
Posted by mooncake623 on July 8th, 2015 @ 12:14am CDT
TFcon just announced that Richard Newman will be a guest at this years convention in Toronto. Transformer fans might recognize him as the voice of Rhinox in Beast Wars, Tankor in Beast Machines and Vector Prime in Transformers Cybertron. Mr. Newman will be appearing all weekend meeting with attendees!

TFcon Toronto will be held from July 17th to 19th, 2015 at the Hilton Mississauga/Meadowvale on 6750 Mississauga Road, Mississauga, Ontario.

Keep your optics tuned to Seibertron.com for the latest in news and updates!

Re: TFcon Toronto 2015 Guest Update - Alex Milne (1709680)
Posted by Va'al on July 14th, 2015 @ 4:02am CDT
Our latest update from TFcon Toronto comes in the shape of a call for questions for the Peter Cullen Q&A panel taking place at the event this weekend of July 17th-18th. If you have something you wanted to ask the voice of Optimus Prime (and just a generally good human), read on below to find out how!

Re: TFcon Toronto 2015 Guest Update - Alex Milne (1710193)
Posted by Va'al on July 16th, 2015 @ 12:11pm CDT
Another quick update from TFcon Toronto, taking place this weekend, featuring another IDW talent, and partner in crime with many of the lineartists on fan-favourite series, including covers: Josh Perez! Check out more info below and here.

We are happy to welcome back IDW Publishing colorist Josh Perez to TFcon Toronto 2015. Transformers fans will recognize his work from the pages of IDW’s, Transformers: Robots in Disguise and More Than Meets The Eye books. He will be in attendance all weekend and offering prints and commissions to the attendees.

Re: TFcon Toronto 2015 Guest Update - Alex Milne (1710225)
Posted by Rated X on July 16th, 2015 @ 2:35pm CDT
Cant wait to see what new figures are revealed at the tfcon in a few days. I have a feeling its gonna be some good stuff !
Re: TFcon Toronto 2015 Guest Update - Alex Milne (1713823)
Posted by Va'al on July 28th, 2015 @ 2:11am CDT
We receive news from TFcon Toronto that their charity auction really went down a treat last weekend! They were able to raise a whopping $10417.40 for Make-A-Wish Canada, and that is all thanks to the fans attending and bidding - so they've sent the informative and thankful post below, for everyone to read and share in the warm glow.

TFcon is very proud to announce that our 2015 charity auction was able to raise $10417.40 for Make-A-Wish® Canada. We are very proud of everyone in our community that contributed to make this amazing feat happen.

Make-A-Wish® Canada creates magical moments for children between the ages of 3 and 17, living with life threatening medical conditions, through granting a child’s one true wish. Make-A-Wish® strives to create hope, strength and joy by giving a child a much needed respite from being sick, allowing them to experience the wholesome enjoyment of just being a “kid” again.

Because the entire family experiences the diagnoses, treatment and day-to-day challenges of caring for a child with an illness, the entire family is included in the wish experience. Make-A-Wish® likes to make sure their families do not have to lift a finger or spend a dime. So if you think of the cost of sending a family of 4 to Disney for a week from the car that picks them up to park activities, souvenirs as well as food and medical insurance the average cost of a wish is $10,000. So that means, because of the TFcon Toronto 2015 charity auction a child will have their wish come true!