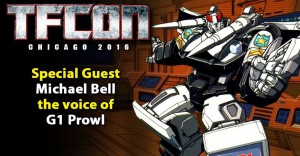 We have an update for TFcon Toronto 2016, regarding another guest announcement for this summer's edition of the event: Michael Bell, voice of Prowl and Sideswipe among many others from the G1 Transformers animated series! Check out more info below, too.

We are happy to welcome the voice of Generation 1 Prowl and Sideswipe Michael Bell to TFcon Chicago 2016. He also voiced Bombshell, Brainstorm, First Aid, Gort, Junkion, Scrapper and Swoop in the same series. He then returned to the characters of Sideswipe and Scrapper for the video game Transformers: Devastation. Fans of the 80s will also remember him as the voice of Duke in GI Joe, Lance in Voltron, plus Grouchy, Lazy and Handy Smurf in The Smurfs.

We are very pleased to announce Flint Dille as a guest at TFcon Toronto 2016. Flint is a writer and story editor who wrote episodes for numerous Sunbow Productions in the 1980s, including G.I. Joe, Inhumanoids, Visionaries, and The Transformers. As a story editor on the original Transformers cartoon, he was responsible for approving and supervising the writing of scripts, as well as maintaining continuity, and developing the origin of the Transformers. He is also the co-writer of IDW’s The Transformers: Autocracy and its two follow-up series, Monstrosity and Primacy.

Re: TFcon Toronto 2016 Guest Update - Michael Bell (1796418)
Posted by D-Maximal_Primal on June 9th, 2016 @ 6:32pm CDT
We have another guest update to bring to you today for the upcoming TFCon Toronto. This time, we are proud to announce that Jim Byrnes, the voice of Beast Wars Inferno and Beast Machines Thrust, is set to show up at the convention. Here is the little blurb about Byrnes that TFCon announced:

TFcon is proud to announce that Jim Byrnes will be a guest at the 2016 convention in Toronto. Known to Transformers fans as the voice of Inferno in Beast Wars and Thrust in Beast Machines, Mr. Byrnes will be appearing all weekend meeting with attendees.

Due to the huge demand for TFcon Toronto 2016 we have had to open up a block at a 2nd hotel, the Four Points by Sheraton Mississauga Meadowvale. You can reserve a discounted room by calling 1-800-368-7764 and ask to be confirmed under the group TFcon rate or book via the following link:
https://www.starwoodmeeting.com/events/ ... y=1A92C441

Stealth Claw wrote:oh dose anyone know if any of the big transfer reviewers will be their? (peauge, optibotimus, emgo, balmatrix)

Probably not, at least I haven't seen anything from them on Twitter.
Re: TFcon Toronto 2016 Guest Update - Michael Bell (1799016)
Posted by D-Maximal_Primal on June 19th, 2016 @ 9:33pm CDT
Thanks once again to TFcon Toronto we have another guest update for you, this time in the form of artist Josh Perez! Perez has done artwork for both ongoing Transformers series and his bio provided by TFcon Toronto can be found below:

We are happy to welcome back IDW Publishing colorist Josh Perez to TFcon Toronto 2016. Transformers fans will recognize his work from the pages of IDW’s, Transformers and More Than Meets The Eye books. He will be in attendance all weekend and offering prints and commissions to the attendees.

Re: TFcon Toronto 2016 Guest Update - Michael Bell (1799256)
Posted by D-Maximal_Primal on June 21st, 2016 @ 9:49am CDT
Thanks to TFcon Toronto we bring you word of some potentially huge prizes. TFcon Toronto announced today that they will be running a Charity Auction to benefit Make-A-Wish Canada that will be co-hosted by Dan Gilvezan, the voice of Generation 1 Bumblebee. Prizes include a Frank Welker VIP pass among other things. Check out the announcement below, and head to the original source by clicking on the TFcon link above to check out a video regarding the auction was well.

Everyone that donates a Transformers item to the TFcon Toronto 2016 charity auction for Make-A-Wish Canada will be entered into a draw for a huge Transformers prize pack, including a Frank Welker VIP ticket for the convention. Even people that can not attend the convention can enter for a personalized autograph from Megatron himself. The charity auction is on Friday, July 15th at 8pm co-hosted by Dan Gilvezan the voice of G1 Bumblebee. Thanks in advance to everyone for helping get the word out about this to help us raise money for this great charity. Check out the video below for more details.

Re: TFcon Toronto 2016 Guest Update - Michael Bell (1803315)
Posted by Va'al on July 5th, 2016 @ 3:55am CDT
From the land of TFcon Toronto, Canada, we have a new guest announcement in the shape and body of artist Marvin Mariano, the person behind concepts and toy designs for a number of lines and series in the Transformers toyverse. Check out more info below, and head here for tickets!

TFcon is happy to welcome back Transformers toy designer and artist Marvin Mariano to the 2016 convention in Toronto. Marvin’s involvement with the Transformers franchise includes Transformers: Rescue Bots (2013-2014), Star Wars Crossovers (2007–2010), the Transformers Movie (2007), as well as concept work for Armada (2001-2002) and Beast Machines/Beast Wars (1999) including the design of Obsidian, Transtech/Armada Optimus, Megatron, Cheetor, Blackarachnia, Shockwave, and Starscream. Marvin will be setup in the TFcon artist alley all weekend.

Re: TFcon Toronto 2016 Guest Update - Michael Bell (1803361)
Posted by Stealth Claw on July 5th, 2016 @ 9:54am CDT
Dose anyone know how much the 3 exclusive figures will cost, I may go but would like to pick one of the exclusives if any are in my price range. thanks.
Click here to view additional comments about this topic at the Energon Pub Forums ...