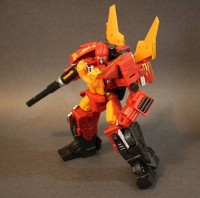 Happy Holidays SourceFans!
This week we have Botcon 2010 Exclusives in our New Recruits section! Also this week we will be getting the TFX-04 Protector armor kit instock. Our HOLIDAY SALE continues with 75 items up to 75% off! Save BIG this holiday season with the TFsource Holiday Sale! You can view the Holiday Sale circular here! All this and more, in this week's SourceNews!

Plus with TFsource Combo Pricing, save $4.95 when you buy with the ROTF Bludgeon Figure!

Well here it is! Since it won't be ready in time for the Holidays, we can't call it the stocking stuffer, but this year's exclusive is WST Military Transport - Black and White Edition! More complexity than any WST so far, 3 modes to transform to, a heavy amount of die-cast, an all new mold, and did we mention it is going to be a limited edition piece? Due to all of the above, it is a higher price than past WST's

Featuring exclusive recolored figures, each paying homage to famous scense from the G1 Transformers movie! Clear purple Cyclonus, Galvatron and Scourge, and a Clear blue Rodimus, Battle Damaged Kup and Scrap Heap! Best of all save almost $20 with TFsource Combo pricing when you preorder both sets!

Next up in the amazing line-up of Transformers 2010: Predaking reissue! A reissue of the Classic D-78 Transformer, that featured the Predacons ready to rage carnage on the autobot forces. Razorclaw, Headstrong, Tantrum, Rampage and Divebomb are redone in all their Transformers 2010 glory!

Limited stock remaining, this is likely the final stock we will have of this popular piece, so don't miss out!

Our HOLIDAY SALE is back and bigger than ever! 75 items up to 75% off! Save BIG this holiday season with the TFsource Holiday Sale! GO SHOPPING NOW! Happy Holidays!

Visit TFsource.com to see all of the items on sale!

Or you can view the Holiday Sale circular here!

TFSource.com - Your Source for BIG Transformers Savings this Holiday!

CDMW-10 is back instock! Just in time for the Predaking reissue arriving in our warehouse, likely on Monday! Pick up both while you can, CDMW-10 it is not likely we will be fortunate to pick more of up again.

Now up for Preorder: CDMW-15 The Kings Power Parts - Pair of Giant Foot Plates!
Once again you can take your Predaking to the next level with this pair of Giant Foot Plates! Set for a release date of December... just after Reissue Predaking is released, preorder this set today along with the restock of CDMW-10 and save with TFsource Combo Pricing!

Now up for Preorder: CDMW-14 The Kings Power Parts Giant Sonic Sword! 227mm long of power, this word will allow your bots to pack a big punch! Ships in Late November.

Now up for Preorder: CDMW-13 Aviation Brigade Power Parts! Devy brings your bots to the next leve with this add-on set! Included is a Custom Blast Shield, Large size Discharger Rifle and Bonus Face Plate! Set for a January release - preorder up now!

CDMW-11 The Kings Power Parts Custom Wings now instock! Included with each is a Power Plus Kit to help protect Divebomb's wings when attached. Limited stock remaining and there will be no more release of the version with the 14K gold so get these before their prices soar on the secondary market!

WolfDawg wrote:Glad these guys are getting Protector this week. If they also ship this week, I ought to have mine by the next week. I love TFSource (their shipping is EXTREMELY fast and reliable), but it always seems as if they're the last online retailer to get new figures.

I scored this from Toyarena. They seem to be the first online retailer( aside from Robot kingdom) to get the newest stuff , especially the 3rd party stuff..

Tfsource does pack and ship stuff exceptionally well.. I commend craig on the job they do..Just their prices sometimes make me chuckle.. Those botcon exclusives? $189 for scorch and double punch? Ouch........
Re: TFsource 12-13 SourceNews - TFX-04 Protector Trailer due instock this week! (1157688)
Posted by Iram123 on December 15th, 2010 @ 9:18am CST
I agree with you but from my personal experience, it bought 10000 Twitter followers from www.socialkik.com and they added them to my page in a little over 2 month. All the followers appeared to be real and some of them turned out to be great customers.