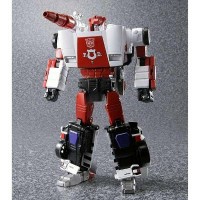 TFSource - now accepting Paypal payments for stacked orders! You asked for it, and now you can pay with a credit card or Paypal for your stacked orders! To learn more about order stacking read here: Stack your orders, save on shipping, pay with Paypal!

Wow - something arrived in our warehouse and FedEx delivered a full 3 days early - just in time for the holidays! Preorders already being processed!

A very impressive shipment just arrived in our warehouse. None other than the FP-DX Armored Battalion set of 3 figures! We'll set to instock and start processing orders shortly!

The figure is a mystery four-wheeled figure that converts to robot and has two scoped rifles. Release date is approximately February.

Note: this is not a retail price adjusted up situation, $68.99 is the regular retail and TFsource and Fansproject will donate $20 per unit ordered by 12/18 to the Salvation Army.

F4 Phantom is the first of 5 figures by TFC toys, that combine together to form the mighty Project Uranos! When all combined, these figures will present one of the most impressive combiners to date! You can now order F4 Phantom here:

This is the second run with some improvements on the first, order yours here:

Preorder for TFC Uranos Combiner Gun - Up! This is an add-on weapon from Xtransbots. 13cm in length and consists of 5 separate guns! Preorder yours here:

Now up for preorder: Dr. Wu Diecast metal Piledriver add-ons! These look great on MP-12, and are very shiny! Prerder yours here:

Now up for preorder: MW-05 to MW-08 Mini Warriors Cogz, Duneraker, Veer & Bushwhacker! These are shipping as assortment sets of two figures, but we are offering them as singles or sets! Preorder yours at TFsource here:

TFsource - Your source for iGear customs

TFsource - Your source for iGear customs

Lots of Takara Tomy Arms Micron on sale as part of the TFsource Holiday Sale including AM Thundercracker! Over 100 items up to 75% off, lots of great items still being added, check it out here: http://tfsource.com/category/view/category_id/316/?&per_page=120

Did you enter the TFSource Holiday Shopping Spree yet? If not there is still time! We will draw shortly before the holidays so there is still time to get your order in. One lucky fan wins it all, $500 in TFSource Store Credit! Must be 18+ to enter, only one entry per person, don't delay, enter today!

The second of three in the series - order yours here: http://tfsource.com/products/view/product_id/5134/

Just announced from Takara Tomy - New Arms Microns! Two different sets, one infused with Dark Energon Power and the other with Matrix Power, each adds new power to your Arms Micron figures! Preorers up soon - at TFsource here: http://tfsource.com/japanese-transformers-prime-figures/

Now instock: AM-24 Cyrus, AM-25 Nemesis Prime & AM-26 Smokescreen! Preorders are shipping out, all sold out in Japan, order from TFSource's remaining stock here:

We are restocking many rare and hard to find Fansproject & Make Toys items (including City Commander!). Preorder now for when the restock arrives.

Don't forget that Fansproject Assaulter is still Instock! Only this first release stock includes the bonus parts mini model kit, and if you haven't seen this piece in person, it's amazing! In the box it weighs almost 2 pounds and is a very solid piece! Preorders are being processed and will ship out promptly, didn't order yet order yours here before they're gone.

We've posted USPS's holiday shipping schedule. It's getting down to the wire, so don't delay and place your holiday purchases today! Schedule duplicated here on the Source blog! Holiday Calendar | Source Blog

NEW SOURCE ARTICLE! To buy or not to buy? This week we look at success and failure in risky vintage TF and preTF buying Leap Of Faith | Source Blog


Have you signed up for Source Points yet? Earn points with every purchase towards Freebies! Accumulated points and want to redeem them? Click the following link to enroll or redeem your points today! Source Points - TF Source 
Become a fan of TFsource on Facebook! We've spent years building TFsource into an online resource for TF fans, and now we have created a page on facebook for our fans. We'll keep you updated on new releases and TF info, as well as any contests or promo's we run, some of which will be exclusively through facebook.