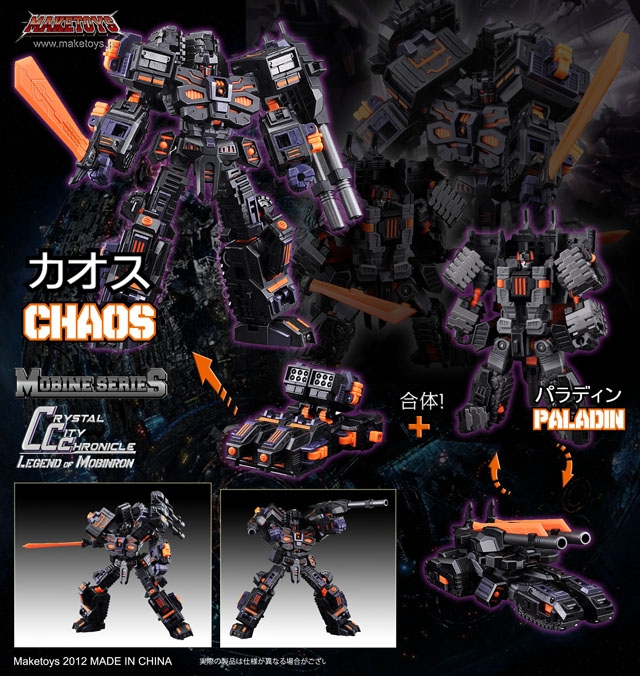 Great News SourceFans!
Lots of great preorders this week inlcuding Make Toys Paladin/Chaos and Fansproject CA-11 Last Chance and CA-12 Downforce! The highly anticipated Fansproject Crossfire 02 - Colossus Set is now instock along with Japanese Beast Hunters Optimus Prime and Shockwave, and our final restock of the popular Fansproject - Causality CA-09 Car Crash and MECH iDEAS - Demolition Crue Set of 2 - DC-01 Apex & DC-02 Geminus! Our Spring Cleaning Sale continues with over 150 items at up to 75% off! Check out the Source Blog for our latest Source Article, Source Review and Source Interview! All this and more... in this week's SourceNews!

TFSource - now accepting Paypal payments for stacked orders! You asked for it, and now you can pay with a credit card or Paypal for your stacked orders! To learn more about order stacking read here: Stack your orders, save on shipping, pay with Paypal!

Now up for preorder: Fansproject CA-11 & CA-12! Most likely Last Chance and Down Force will ship a month apart. If you don't want to wait make sure to preorder them on separate orders or use order stacking to manage your orders and save on shipping! Preorder yours at TFSource here:

Final restock from Fansproject on this popular piece! For those that preordered both, they say CA-10 will ship "Shortly" but if you preordered just CA-09 we'll process your order! Also if you stacked him, if you don't want to wait you can always create an order for him as well. Lots of other great items instock now he can ship with!

Order yours at TFsource here:

New Fansproject Function-X: Smart Robin and Quadruple-U preorders up! Set for an April, May and February release dates, each is $68.95, fully articulated, and features unexpected transformations! Preorder yours at TFsource here:

Now up for preorder - Make Toys Paladin/Chaos! Preorder yours at TFsource here:

And now for some unfortunate news, Takara Tomy did confirm that MP-17 Prowl & MP-18 Streak are delayed until September & October. And no update still on smokescreen...
Preorder yours at TFsource here:

Now instock: Japanese Beast Hunters - including Shockwave & Optimus Prime! We have very limited stock of these available, also in is the EG figures! Technically these are under the Transformers Go! brand but it's confusing with the various series all lumped together so for now we'll call them Japanese Beast Hunters! Many of the Japanese versions feature unique color schemes as well as packaging, so check them out! Order yours here:

New Beast Hunters Deluxe Figures - Preorders Up! Also up for preorder at TFsource - Beast Hunters deluxe wave 3 & 4! There are six new figures in total in these two waves: Vertebreak, Ratchet, Arcee, Knockout, Storm Razor & Dreadwing. We are offering sets of 3 of each, and factory cases of both waves! Preorder yours at TFSource here:

Now up for preorder: Generations Wave 2 - Ruination! Order the full set of 5 to form Ruination/Bruticus or a factory sealed case! Set for a May 2013 release. Preorder yours at TFSource here:

TFsource - Your Source for Japanese Generations!

Some hot new preorders were just announced by Takara/Tomy including the mighty Generations Metroplex!

First up is Super GTR-04 Maximus! The fourth in the Super GT series. Set for a September release! Preorder yours at TFsource here:

Also announced was TG-24 FOC Optimus & Bumblebee Set! From the photos it appears this set will feature a metallic finish and some nice weaponry! Preorder yours at TFsource here:

Finally we have up for preorder TG-23 FOC Metroplex! Just how he differs from the US release is unknown. This listing is for the early air shipment and based on it being a larger piece than fort max it will be a very expensive piece to ship internationally. Preorder yours at TFsource here:

Save BIG with over 150 items on sale! With deeper discounts on many items, and over 100 new products added to the sale, check them out! There are definitely some decent figures in the sale, so check carefully through them all!

This anime/g1 cartoon accurate version of Devastator features a new head sculpt, cartoon coloring, and a purple mixer barrel! One of almost 200 great items up to 75% off as part of the TFSource Spring Cleaning Sale!

New Series: Transformers Go! The first 3 are interchangeable combiners, so all 3 can combine together into 3 different forms! And save with TFsource combo pricing when you preorder all 3 together! Preorder yours at TFsource here:

TFsource - Your Source for Transformers GO!

Now up for preorder: Impossible Toys Tetra Jets! For one week only there is Early Bird pricing with $10 off the MSRP - preorder each for $49.95 instead of the normal $59.95. After the end of the week pricing returns to normal so preorder yours today! Preorder yours at TFsource here:

Now up for preorder: Alicon - Troopbuilder Promo! For a limited time Impossible Toys is running a promotion to save $20 off the Alicon figure, preorder yours for just $49.95! This is for a new preorder, due out in May, preorder yours today before it returns to the regular price! Preorder yours at TFsource here:

Impossible Toys Clearance Sale! Up to 70% off - Final Stock! Also get them for free with source points + purchase here:

Dr. Wu restock! we have restocked the popular skybreaker swords as well as other popular items! Check them out here:

Now up for preorder: Dr. Wu - DW-P14 Rear Guard! Included are the more accurate arm cannons for all 3 classics jets: Ramjet, Thrust, and Dirge! Preorder yours at TFsource here:

Now instock: Shooter Master 4-pack! Took a while but these are finally instock and look really great. We've taken some photography of them, and they definitely turned out to be a nice looking set! Preorders are being processed and will ship out shortly! Order yours at TFsource here:

Now up for preorder: SXS F01A and SXS F01B - Jetpack and Roller Add-ons! Features a jet pack for MP-10 and roller add-on as shown! Set for a May release, should be out shortly! F01A is regular and F01B is for the silver roller! Preorder yours here:

Now up for preorder: THE WORKSHOP - G1 Seeker Wing Lifts! Included are the wing lifts for G1 Starscream, Thundercracker and Skywarp. So 3 sets of lifts in total from this new 3rd party add-on company! Preorder yours at TFSource here:

TFsource - Your Source for Crazy Devy!

We are also waiting on a restock of some of the most popular Crazy Devy add on parts!

Now up for preorder - Keiths' Fantasy Club add on Missile & Shoulder Kits! This kit not only adds new missiles and shoulder armor to your figures, it also combines to form a buster cannon for each figure to hold! Preorder yours at TFsource here:

New Preorder Up: Guilty G-04 Hunger - Seeker Add on Set! Goes great with the seeker set ace and elite Henkei Sets! Includes all of the arm-mounted lasers for all six seekers, and the air-to-air missiles for Starscream, Thundercracker and Skywarp! Perfectly colored to match your Henkei/Classics seekers! Preorder yours at TFsource here:

There is an update from MMC on Hexatron - that it's officially delayed until late May. The good news is MMC has provided us with a sneak peak of the packaging and the delay is to make sure they deliver a quality product. Having seen TJ's YouTube video we're confident despite the delay this is not one anyone will want to miss! Preorders up here at TFsource:

KM-03 Knight Morpher Cyclops Now Instock! We have limited stock of this long out of stock figure left, order yours at TFSource here:

Our next shipment of TFC Toys Blackbird has just arrived in the warehouse! We will start processing the remaining orders in the next 1-2 days, be sure to order this guy if you are considering, TFC says there will be no more stock released, and it's doubtful there will be another run, making Uranos much less common than Hercules! The same is true of F-15 Eagle, F-4 Phantom and the two remaining jets! Order yours at TFsource here:

Now Instock - Unique Toys War Hawk! It's been a long time a coming, but Unique Toys apologizes for all the delays caused by the factory shut down for CNY. Preorders are being processed for shipping out - also don't forget to generate an order from stack if you want yours to ship out now! Order yours at TFsource here:

Now up for preorder: Unique Toys War Bison! Due out in 2nd quarter 2013! Preorder yours at TFsource here:

Now up for preorder Unique Toys War Rhino! Due out 2nd Quarter 2013, first run has a reduced preorder price! Preorder yours at TFSource here:

[url]NEW SOURCE ARTICLE[/url] - We continue exploring the beauty and beasts of Transformers Binaltech! BT-05 to 08 this week. Binaltech BT-05 to BT-08 | Source Blog


Have you signed up for Source Points yet? Earn points with every purchase towards Freebies! Accumulated points and want to redeem them? Click the following link to enroll or redeem your points today! Source Points - TF Source 
Become a fan of TFsource on Facebook! We've spent years building TFsource into an online resource for TF fans, and now we have created a page on facebook for our fans. We'll keep you updated on new releases and TF info, as well as any contests or promo's we run, some of which will be exclusively through facebook.

UltraMattus wrote:Seriously - where are my Encore Fort Maxes? I paid last Monday as soon as your website said they were instock, and not even a shipping confirmation yet. I'm trying to be patient but I paid way too much money to be patient for very long.

I preordered a "mint box" from them on October 4. I even asked them for a single-taped box, as AFA his a strict rule on that. So my order says to only give me one with a single-taping. The shipment comes and no update in regards to my piece. I send them an email saying how I appreciate everything they have done for me, and if there is anything I should know in regards to my order.

Nothing. And this worries me because when I asked if they were getting any of the BeCool figures, Curt offered to order the ones I wanted. So I am hoping the case is that the C9 offer for the latest preorder is because those who ordered "mint" boxes did not get theirs. Or did anybody here order C9 before the preorder deadline and not get theirs?

I just received my skybreaker sword in the mail and couldn't resist recreating a scene from the Transformers Prime episode "Legacy" with my figures.

Check it out here -