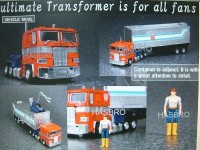 Greetings SourceFans!
This week we have many new recruits including lots of great G1 figures, ROTF hard to find figures, SDCC Exclusives, TFCC Exclusives and more! Over 100 new items and many restocked figures now available again at TFsource! We've also got a new Source Article by Maz on the World of Minibots. You can check it out here. New instock items like Revoltech - Sci-Fi 030 - Transformers Optimus Prime, iGear PP03S Seeker Storm, and a restock of the original 3 seekers as well! We also have quite a few preorders for items that will be restocked soon, including Headrobot - Blood the Dark Warrior - Upgrade Kit, MGT-01 Arcee, Headrobot: Hothead - Headmaster Head, and TFsource.com - Japanese Henkei Classics - C-05 Hot Rodimus! All this and more in this week's SourceNews!

Just arrived in our warehouse: Seeker Storm! We'll do our best to get everyone's preorders out ASAP. The restock shipment of the other seekers is due in Monday, so we'll flip them instock as well!

Now set to instock: iGear Seeker jets! All 3 (Attack, Jet and Elegy) as well as the 3-piece set are now all set to instock! If you have a preorder with us that was just flipped to instock it will take a day or two to ship them all out but we're shipping out as fast as possible! If you haven't preordered yet, place your order this week and still get your order FAST!!

This great revoltech figure comes with tons of add-ons, is highly articulated and we'll post pictures shortly of the packaging - it looks great! Preorders started being processed/shipped out today already, be sure to get your order in as there was a shortage on this particular figure from Kaiyodo. It's not clear if we'll be able to restock it or not!

Restock Preorder Up! Blood the Dark Warrior Upgrade kit sold out so quickly, we have worked with Head Robots to stock a limited amount of additional pieces. They will be restocked sometime late this month, or early October so preorder yours today!

Miss out on the MGT-01 Arcee figure? Good news, TFsource has a restock of this figure on the way, scheduled to arrive within the month! This great piece includes a stand and is highly posable, preorder yours today!

Great news: Headrobot's Hothead Headmaster head will have a small rerun of additional pieces released! One of, if not the most popular of Headrobots popular add on pieces, this takes your universe Hardhead to a new level! Preorder yours today, set for a late September restock date!

This extremely popular figure is set for being reissued and will be released in the next 1-2 weeks! Pick yours up today for a fraction of what they have been selling for on the secondary market, and this piece goes great with the Protector Armor Kit!

TFC Toys has updated that Heavylabor unfortunately is now delayed until October. Factory production schedules plus the QC requirements have pushed back the release date by approximately a month. So although an inconvenience, it is a very positive point that TFC toys continues to make quality of the final product a top priority!

Looking for TFC Toys Exgraver? Look no further! The restock of this popular toy will ship out from Asia this week or early October! This first piece from TFC Toys has gotten 4 five star reviews on TFsource, so definitely has received high marks from the fans, so preorder yours today!

Maz has done it again! Another solid Source Article, this time on the world of minibots! From Joustra, to Microchange, to Peruvian and Mexican rarities, he provides decades of research and collecting expertise into one easy to read article with lots of great pictures! The envy of any minibot collector, check out his new article here on the TFsource Blog!

MP-10, MP-09 Masterpiece Rodimus (re-release) and the Chronicles Optimus & Megatron have shipped out and are en route for delivery to our warehouse early this week! We'll start posting out preorders as soon as possible so stay tuned!

Freshly arrived in our warehouse, we'll take photos of the final product and post them soon, meanwhile preorders begin processing and packaged for shipping out today!

Each features all new color schemes and original head sculpts! Both available for preorder now, and set for a November release. Best of all, preorder both and save with TFsource combo pricing!

This exclusive repaint pays homage to the vintage seeker favorite, now available as a Deluxe figure in the Japanese Dark of the Moon line! Looks fantastic alongside the Starscream and Thundercracker figures, now Instock at TFsource!