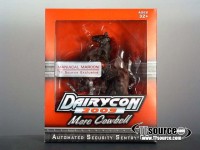 Member Methusalen has let us know that the Daircon 2010 figure Maniacal Maroon ASS-09 is available t TFSource for 49.99!

It appears that Dairycon’s “Donkey of the Apocalypse” is about to see his final variation! It’s been revealed that the fabled Limited Edition “Maniacal Maroon” ASS-09 figure will be available EXCLUSIVELY through our friends at TFSource.com! Word on the street is that the figure will retail for $49.99, a fraction of the price that some of the previous versions have seen on the likes of Ebay! The figure will only be available in *very* limted numbers, and it’s my understanding that once he’s gone, HE’S GONE! Keep an eye out for more news regarding this figure from TFSource!

Here you go, TFSource now has their Exclusive "Maniacal Maroon" Ass-09 available through their site!
http://www.tfsource.com/products/view/product_id/1345/
$49.95

Mr_Xevoz wrote:I think they spelled it "assinine" because it is a mechanical donkey.

*Ding!* Can someone give this man a cookie?! I apologize for any confusion, but that was the pun, a play on words in regards to his name... Ass-09 = Asinine ...but once you have to explain the joke...