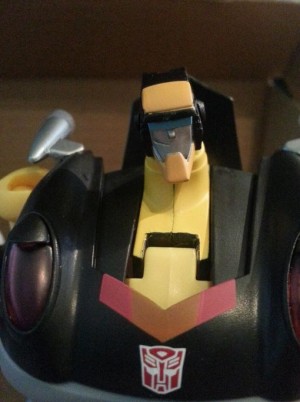 The fifth figure in the Official Transformers Collectors' Club TFSS 1.0 is starting to ship! Twitter user @pile_of_butts hit the Jackpot.......literally. Animated Jackpot is repaint of Transformers Animated Jazz featuring a new head sculpt. Five down and one to go, which will obviously be be the highly anticipated Ultra Mammoth. Check out @pile_of_butts' images below.

His bio doesn't give him a home dimension, so I'm guessing its safe to assume that he's from the main Animated universe rather than some minor one related to it (like "The Cool" manga or whatever).

I wonder how the Transtech feel about having to deal with the rambunctiousness of yet another Jackpot in Axiom Nexus? Jackpot IV, perhaps?

Rated X wrote:It would be nice if a 3rd party could make a more serious head for this figure. Something classics style minus the huge jaw. That way he would look good next to Kickoff and Circuit.

What are you talking about? That head is perfect for Jackpot. It totally fits his lively, jokey, happy-go-lucky personality. He's one of the most fun-loving dudes ever. "Jackpot" and "serious" do not mix.

I admit, I'm concerned...I got a fake-looking email a week or so ago that claimed to be from the OTFCC and said my CC had declined and wanted me to call and give them a new number and CV number code over the phone. I blew it off since A} my CC still had the required amount on it and B} with all the security problems they had, I wasn't going to call a number from an email with no OTFCC markings or way to confirm it, but, on the off chance it was legit, hopefully Jackpot will still show up in the Club Store like the rest of the subscription figs have (or I can just buy it off that first poster...you take PayPal?).
Re: TFSS 1.0 Jackpot Now Arriving (1524006)
Posted by triKlops on October 15th, 2013 @ 1:11pm CDT
Just got mine in and I am pretty happy with it.
Love the deco and concept; only drawback so far have been some sloppy paint apps on the head.
Re: TFSS 1.0 Jackpot Now Arriving (1528264)
Posted by Sabrblade on November 6th, 2013 @ 12:20pm CST
Jackpot (and Ultra Mammoth) is now available in the club store - https://www.toyarama.com/store/2012-transformers-figure-subscription-service-figure-jackpot-version-1-month-5-1-pc-p587.php