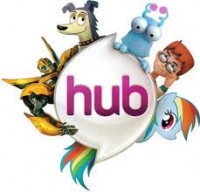 We just recieved word that The Hub has revealed its new saturday schedule starting tomorrow with Rescue Bots moving to 9:30am ET / 6:30am PT. Transformers Prime will stay in the same time slot.

Tomorrow The Hub TV network is unveiling its new Saturday line-up. With that, "Transformers Rescue Bots" is moving to its new slot at 9:30am ET / 6:30am PT starting with the all-new episode "Flobsters on Parade" where the Rescue Bots have to contain a swarm of flying lobsters that has overrun the annual Griffin Rock summer festival. "Transformers Prime" will remain at its current time at 8:30pm ET / 5:30pm PT. This week's episode is the third episode in the three-part season two premiere. In the all-new episode, Optimus begins to rebel against Megatron's commands while the Autobots devise a risky plan to get their leader back.

Holy slag! That could mean it's an invasion from the Migo of Yuggoth, or Rios from Metroid, OR--dare I hope?--

Yes, YES, YESSSS!!! Before the debates about whether this cartoon has continuity with TF Prime are resolved, we get potential continuity with ROBOTECH! Ohhhhhh, the miracles of cross-promotion Carl Macek could work with HUB programming if he were still alive!

Then again, it could just as easily be an homage to 'Piranha 2', where they were crossbred with flying fish. Whatever. And it'd be cool if the kid kept one as a pet and named it Nautilator or Sea Clamp.
Re: The Hub Unveils New Saturday Schedule: Rescue Bots Move to New Time (1354495)
Posted by Sabrblade on March 3rd, 2012 @ 12:55am CST
What this description doesn't mention is that it might actually be "flying lobsters vs. killer dogs", as Jeff Kline mentioned that would happen in an upcoming episode.